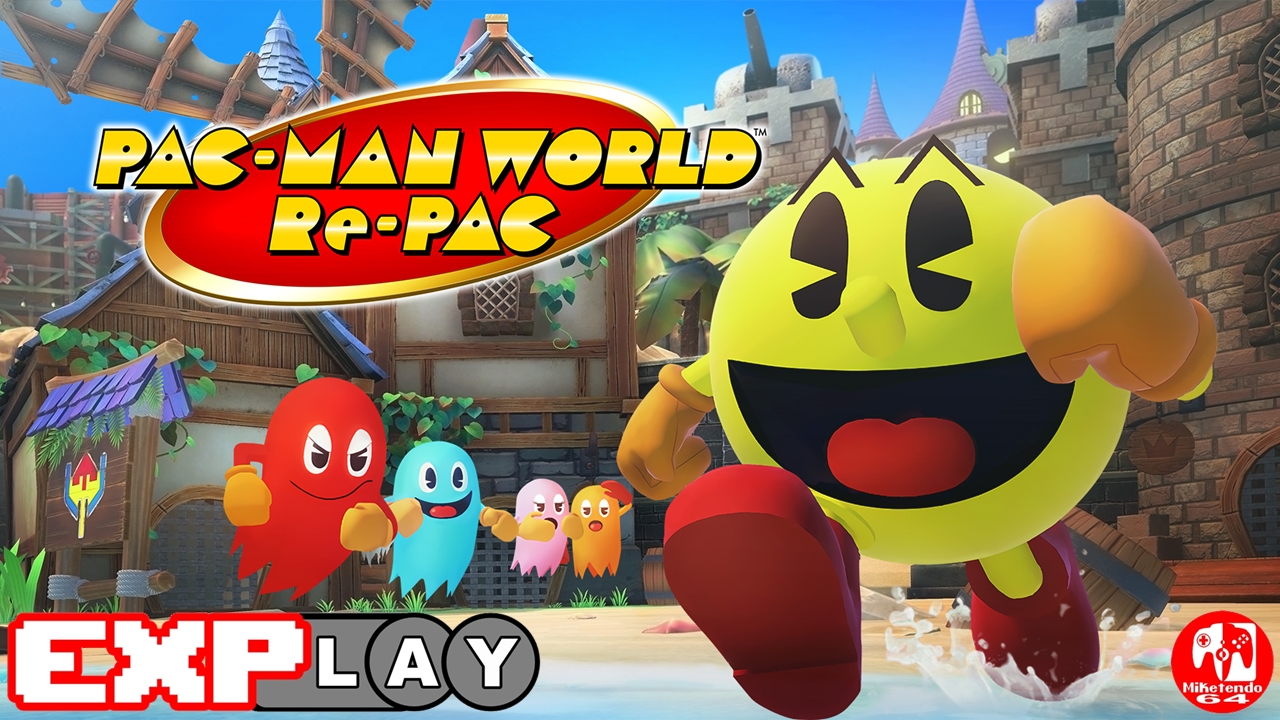 Welcome to EXPlay, (Explain & Play) the review series where we care not for scores but tell it how it is when it comes to every game we get our hands on, whilst also taking the time to include some lengthy gameplay, to give you the reader, the chance to shape your own impressions and views whilst watching and reading. In this installment, we’re covering PAC-MAN WORLD Re-PAC by developer Now Production.

In 1999, PAC-MAN ventured into the world of 3D platforming in PAC-MAN WORLD for Sony PlayStation. The game saw critical success and spawned two sequels and a racing spin-off. 23 years later, and we can revisit the joy of the original again now on Nintendo Switch. PAC-MAN WORLD Re-PAC is a revamped version of the original PAC-MAN WORLD developed by Now Production with all-new visuals and QoL adjustments.

In the game, the Titular Pac-Man is celebrating his birthday with his family and friends when all of a sudden, those no-good ghosts Inky, Blinky, Pinky & Clyde kidnap them and take them away to Ghost Island. Pac-Man sets off to rescue his family and teach those ghoulish ghosties a lesson.

PAC-MAN WORLD Re-PAC is first and foremost a 3D platforming adventure game. Pac-Man must navigate his way through six differently themed worlds that are made up of several stages and a boss in order to rescue his friends and family. Each stage is littered with enemies and obstacles that Pac-Man must overcome so he can reach the end and progress to the next stage. Series staples like fruit and dots can be collected and have uses outside of just earning points. Dots can be thrown at enemies to defeat them and fruit can be used to open locked doors.

Behind these doors can be switches, maze stages and PAC-MAN letters. While opening the doors is not always necessary in beating a stage, collecting what they contain can count towards 100 % completion (like the Maze stages for example or the PAC-MAN letters).

Speaking of the PAC-MAN letters, the letters are scattered about in every stage with the exception of boss stages. They can be found tucked away in hidden areas, out of reach places or simply behind doors. Much like in the Donkey Kong Country games, the letters are always dotted around the stages in order so if you find the M for example and collected the A before, you have missed the C somewhere in the stage and may or may not be able to backtrack to the area where you can find it. Collecting all the PAC-MAN letters in a stage will allow you to play a Bonus Stage where you can collect even more fruit but under a time limit. Once the time is up, the bonus stage will end.

At the end of each stage, everything you have collected in terms of dots and fruit will be tallied up into a score for that stage. Any deaths that you may have experienced will take points away from that score but if you collected any bonus coins during a level, you can take your chances with a slot machine that will give you more points and extra lives if you can get three of the same objects in a row. Upon beating the stage, you can progress onto the next stage or play through same one again if you wish to try to get a better score.

I previously mentioned that you can find mazes in each stage that are locked behind doors. These mazes are more akin to the classic 2D mazes or Pac-Man games. The camera is fixed in a top-down point of view and while it is affixed on Pac-Man with a limited view of the surroundings, the camera can be zoomed out so you can see the whole maze and most importantly, where all of the ghosts are. If you fail to beat a maze, you can try it again as many times as you like at the sign in the Pirate Ship Area hub as well some extra mazes to try your hand at and… if you still want that retro 2D Pac-Man fun, the original game can be unlocked upon beating the main game.

As for the worlds themselves, every world in PAC-MAN WORLD Re-PAC has its own theme like pirates, space, ruins, funhouse, etc. With every themed world, there are themed enemies. in the pirate world, you will encounter pirate skeletons, in Space, you will encounter aliens, and in the funhouse you will be attacked by bumper cars. Most enemies can be defeated with a butt bounce (press B to jump and B again to butt bounce), however, some enemies may have sharp or burning objects on their heads so you may have to defeat them using dots or rolling into them (hold X for a short time and then let go). One particular enemy that you will find throughout PAC-MAN WORLD Re-PAC are of course, ghosts. These can only be defeated by gobbling a power pellet which will turn the ghosts blue and Pac-Man huge temporarily. In this state, Pac-Man can gobble up the ghosts and by gobbling them all up in the vicinity, you can get extra points.

In certain stages in each of the six worlds, Pac-Man can find members of his friends and family. They are locked up in cages and can only be freed with a key. However, the Key isn’t always in the same stage as locked up companion so you will have to keep an eye out in other stages so you can come back and free them. Stages that have keys in them will have a darkened silhouette on the pop-up window that appears when you enter a stage from the hub world. It isn’t paramount to rescue all of Pac-Man’s friends and family but doing so will grant players the “Good Ending” upon beating the game.

PAC-MAN WORLD Re-PAC may feel like a short game as far as modern platformers go but it is still quite a lot of fun. The platforming segments can be a little tricky at times (especially in a certain Space stage), and some bosses can really give you the work around but the beautiful HD visuals and the modern designs for Pac-Man, his companions, and the ghosts makes the game feel more up to date but still familiar enough for those who have played the original game.

On the whole, I would definitely recommend players to give PAC-MAN WORLD Re-PAC a go, especially if they enjoy platformers and Pac-Man games. While it is not quite like the original 2D arcade games, it has plenty of flair and mazes that should appeal to both platformer afficionados and classic Pac-Man fans.