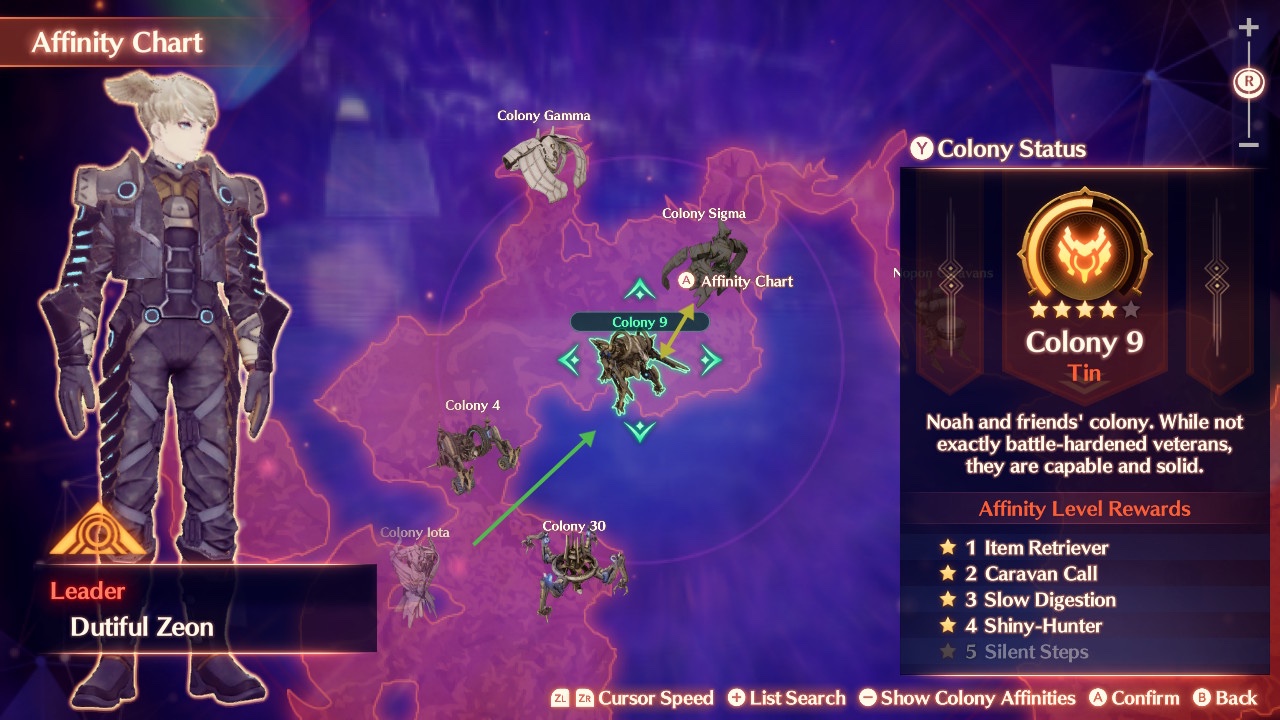 As my personal voyage through Aionios continues, having already shared my thoughts on both the first and second chapters of Xenoblade Chronicles 3, it is now time to do the same with Chapter 3 and so far, it’s the best chapter yet!

Every RPG ever worth playing always has that one part of the game where everything starts to open up fully, with very few limitations enforced open you. For Xenoblade Chronicles 3, Chapter 3 is that part. First, we are properly introduced to our first recuitable Hero, provided you complete her Hero Quest to unlock her and then gain enough CP to have the six protagonists taking it in turns mastering her class, but Chapter 3 is also the part of the game where players can start liberating colonies.

With both Agnus and Keves nations hunting our heroes, Chapter 3 allows players to rekindle bonds with Colony 9 and return back to Yzana Plains, whilst also enabling them to liberate the colony and begin efforts to get your former allies to trust you again. It’s certainly not an easy task as there is plenty of distrust and unrest, but it is most definitely worth the time it takes to accomplish.

Should you follow the main story only, there is plenty you will end up missing out on. From certain characters just having a general laugh with one another to straight up believing in each other, every side quest you set out to accomplish to assist all who call Aionios home, really does pay off. Each of the main protagonists get plenty of character development, that helps to greatly establish the uniqueness of each one, but even some of the most random NPCs going, get interesting back stories, current stories and get to appear more than just once.

It is never simply a case of one and done. The characters you help, you can soon find yourself helping them again or helping their friends, whilst they relay vital information to you, which can prove to be vital to accomplishing your current objectives. Then, of course, there’s the many other Heroes who are all present during Chapter 3. While Ethel is one you won’t miss out on, there are others you can easily skip over because you didn’t take the time to explore, discovering new locations, such as the Dannagh Desert, a rather expansive wasteland filled with ferocious beasts and Unique Monsters, but you’d otherwise miss out on it entirely as the course of Chapter 3’s story has no reason to bring you to this area yet.

Chapter 3 also happily causes players to avoid Elaise Highway as well, a strikingly beautiful locale with a poignant track and home to a Secret Area, provided you’ve acquired the required traversal skill to reach it in for first place. Sure, Chapter 3’s story will have you learn Wall Climbing, but Scree Walking, a very vital skill for walking up slippery slopes, that can only be acquired by going to Colony Gamma and playing through Teach’s Hero Quest and for what it’s worth, his class and healer role is a very useful combination when used with other classes belonging to optional Heroes you can encounter.

Still, Teach isn’t the only Hero worth getting to know as they all are and if you take the time to recruit them all and begin ranking up their classes, when it comes to fighting main bosses or option Unique Monsters, the variety of classes you could be using versus the ones the main story will see you equipped with, can swiftly add a ton of variety that really helps to enrich the game’s battle mechanics.

To skip back to my earlier comments in terms of scenery and locations, Chapter 3 really is where Xenoblade Chronicles 3 starts to shine. If you’re willing to look and explore, enormous areas are there for the taking and you can easily spend hours exploring each one. Be it Elaice Highway, Eagus Wilderness, Dannagh Desert, or simply returning to Millick Meadows, everything opens up in the most fantastic way. I lost hours just messing about but every hour spent off the beaten part, has been well worth it. I have reached the point where I am excited about what happens next, but am in no rush as I am simply enjoying everything else that’s available to me in the meantime.

I really love how Monolith Soft chose to approach Chapter 3. The first two chapters already did a great job of introducing players to the world of Aionios, showcasing their talents at impressive designs, music and storytelling, but Chapter 3 is where the game really starts to come alive and its all too easy to become consumed by it.

For instance, both Mike and I have spent the same amount of time playing Xenoblade Chronicles 3 and whilst he has stayed true to the story, reaching Chapter 7, I’ve played Chapter 3 to its fullest, reaching colonies he had yet to encounter, discovering secret areas he had failed to reach and defeating many different Unique Monsters to the ones he’s faced and conquered. Whereas Mike has reached new areas I have yet to see with my own eyes and encountered many more Heroes, with even more gameplay mechanics unlocked. It’s still the same game either way, but our different approach to playing it has created a new experience for us both and we’re both really feeling it!