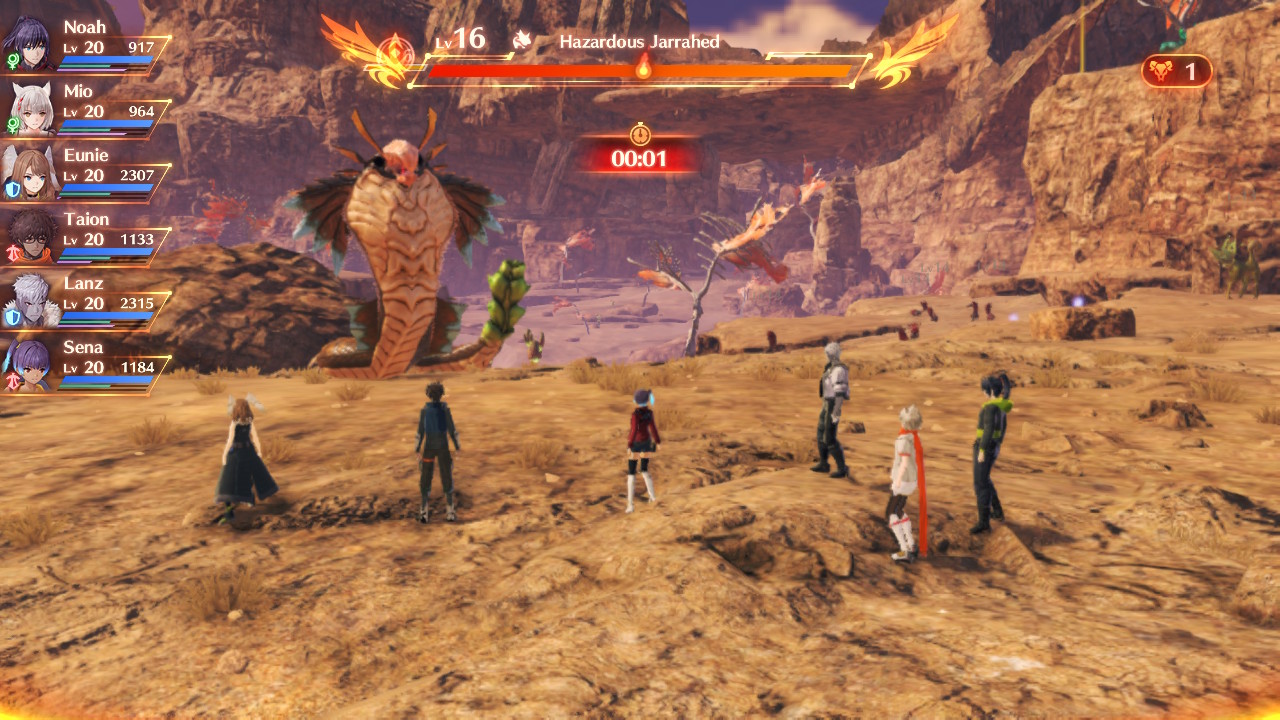 Having already composed my thoughts regarding the occurrences in the first Chapter of Xenoblade Chronicles 3, it is now time to talk about Chapter 2.

Following on from the harrowing events, nearer to the end of Chapter 1, what started out as a union between Noah, Lanz and Eunice, now see all them allied with Mio, Sena and Taion, as their respective nations begin to hunt them. Unable to return to the colonies they once called home, our band of heroes have no choice but to flee all that they have ever known and venture forth to lands unknown and what interesting lands they are.

Still part of the Aetia Region, players are introduced to Millick Meadows, an expansive land of lush greens, a flowing river and bright visuals, filled with many monsters, all eager to do battle against our six heroes. Many can be slain easily, depending on how much you’ve grinding you’ve been doing and on what difficulty you’ve chosen to play, but there will also be a nice selection of Unique Monsters you will be able to take on.

The other area players will be able to explore is a large desert, proving a harsh climate and harsh enemies to face, including some familiar faces. Eagus Wilderness provides an interesting contrast to Millick Meadows but both combined certainly help to showcase more of Xenoblade Chronicles 3’s impressive beauty and striking visuals.

Still, it’s not just the game’s artistic design that shines brightly in the second of seven chapters, but also more of Xenoblade Chronicles 3’s story and gameplay. More about Moebius is uncovered and just what kind of a threat they pose and in terms of gameplay, it’s time to bring back chain attacks, interlinking, unlocking gem crafting and cooking as additional features available and rest stops and husks.

Having gameplay open up in this way is absolutely blinding. Each new feature comes with its very own tutorial but at no point do you ever feel smothered by having everything thrown at you all and once. It’s all drip feed in such a way that players are free to enjoy everything available to them and make the most out of it before progressing forwards in terms of story and still being limited by how far you can actually backtrack due to the events that occurred in the first Chapter.

The best element of all during Chapter 2, however, is the fact players are now able to discover the game’s Class system. It is in this Chapter you can now start swapping each character’s class and have them master new arts with weapons and attire befitting those they fight alongside. You will also be able to earn CP from every monster you defeat, enabling you to rank up your class. A limit of 10 is enforced but can be opened up further into the game.

Just note once this feature gets underway, it will lock itself until players advance just a little bit further into the story to have it unlocked once more. That being said, you are more than welcome to enjoy Millick Meadows as much as you want and max out the selected classes and then swap them out once the method to do so becomes available again.

In conclusion, Chapter 2 does a fantastic job of setting the stage for more serious things to come, whilst showcasing even more of what the game has to offer, helping to keep the game nice and fresh when you hit double digits of game time. Roll on Chapter 3.

[Editorial] A World at War (Getting Started with Xenoblade Chronicles 3)