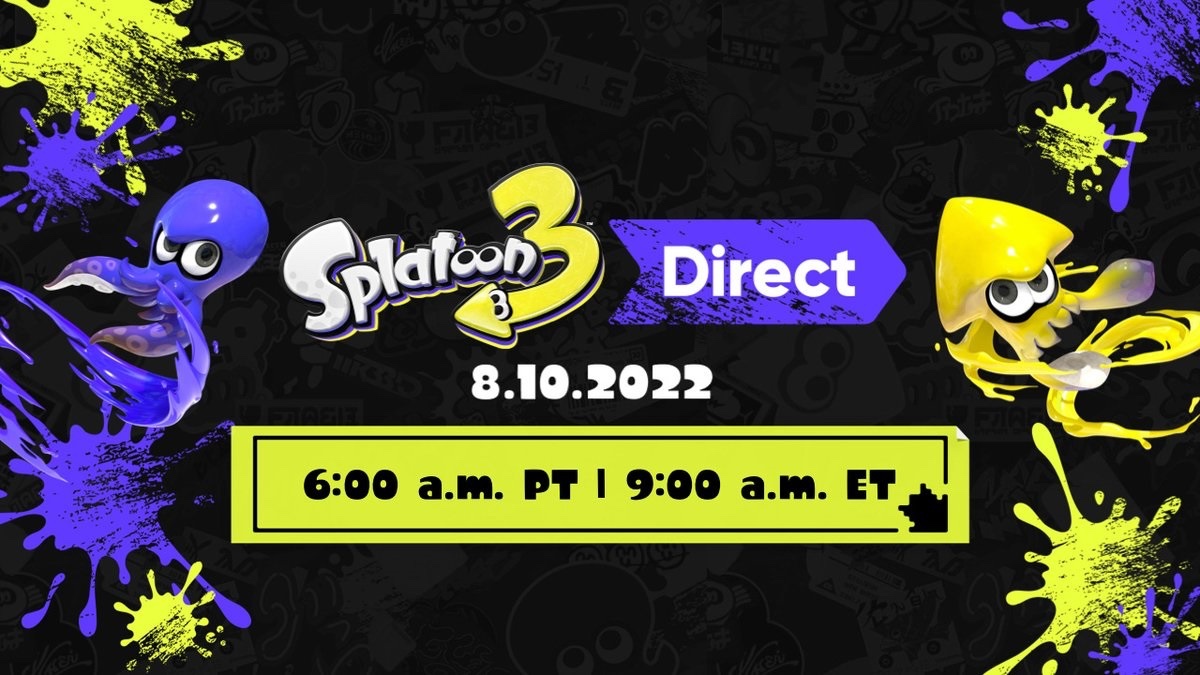 The Splatoon 3 Direct has aired today to reveal new details on Splatoon 3. It started off with an introduction on how to play the game which is more directed at potential newcomers to the series rather than for series veterans. We got to see some new weapons in action like the bow-like Tri Stinger and the sword-like Splatana Wiper and some of the new special weapons like the Tacticooler, which activates a refrigerator where players can pick up energetic drinks to give them a stat boost like faster mobility for example.

The direct also showcased some new features like Tableturf Battle which is a 1 vs. 1 deck building card minigame themed on turf wars where players collect cards and battle it out to claim the most turf using cards. Splatfests make a return and will feature both the traditional 4 vs. 4 Turf wars and the new Tricolor Turf War that has three teams play against each other in 4 vs. 2 vs. 2.

Other things that were shown during the Splatoon 3 Direct were new enemies in Salmon Run, a brief look at the Solo Mode, the ability to customize a locker that other players can see when they play with you or against you online. The locker displays your gear and can be decorated with items and stickers. Splatoon 3 will also have emotes and banners to further customize their Inklings and how their names and titles are displayed in-game. Three cool new amiibo were also shown and are slated to release sometime in Winter.

These #Splatoon3 amiibo figures will be released this winter! pic.twitter.com/uKxSZ0o3TI

If you missed out on the Splatoon 3 Direct Livestream, Nintendo has now published the standard video to their YouTube channel and can be watched below. If you would like to read the full information on what was shown during the direct, the official press release can be found beneath the embedded video.

REDMOND, Wash., Aug. 10, 2022 – In a new 30-minute Splatoon 3 Direct video presentation available on Nintendo’s YouTube channel and Nintendo.com, fans and viewers are taken on a deep dive through the newest entry in the adrenaline-fueled Splatoon series. The ink-splatting, multiplayer action game Splatoon 3 launches for the Nintendo Switch family of systems on Sept. 9, but pre-orders for the game are available now!Splatoon 3 features an intense competition where players claim turf with splashes of color and splat their rivals as ink-spraying Inkling and Octoling characters. Splatoon 3 is a new sequel that introduces features and modes that have never been seen in a Splatoon game before, while resurfacing fan-favorite modes that have been reinvented in distinct ways.This sneak peek presentation unveils new battle stages, new maneuvers and a fun assortment of new splatterific weapons. The presentation also showcases new details about the Splatoon 3 game’s three main modes: the all-new single-player Story Mode, “Return of the Mammalians”; the iconic four-on-four team battles, Turf War*, featuring new weapons and new and returning stages; and the revamped Salmon Run, a co-op mode in which a team of four fends off waves of enemies, which now adds giant, dangerous bosses to the mix.Additionally, recurring multiplayer events called Splatfests are returning with a twist! The Splatoon 3: Splatfest World Premiere demo** will take place on Aug. 27, and offers Nintendo Switch owners the chance to play in a free global Splatoon 3 event before the full game launches on Sept. 9. Both newcomers and veterans of the series can show their support for one of three themes and splat it out in the newly introduced Tricolor Turf War battles! Simply download the free demo in Nintendo eShop starting on Aug. 18 and show up ready to splat for Team Rock, Team Paper or Team Scissors on Aug. 27. Certain parts of the demo will already be playable on Aug. 25, but the main Splatfest event kicks off on Aug. 27 at 9 a.m. PT and runs until 9 p.m. PT.

Highlights of the Splatoon 3 Direct presentation include: