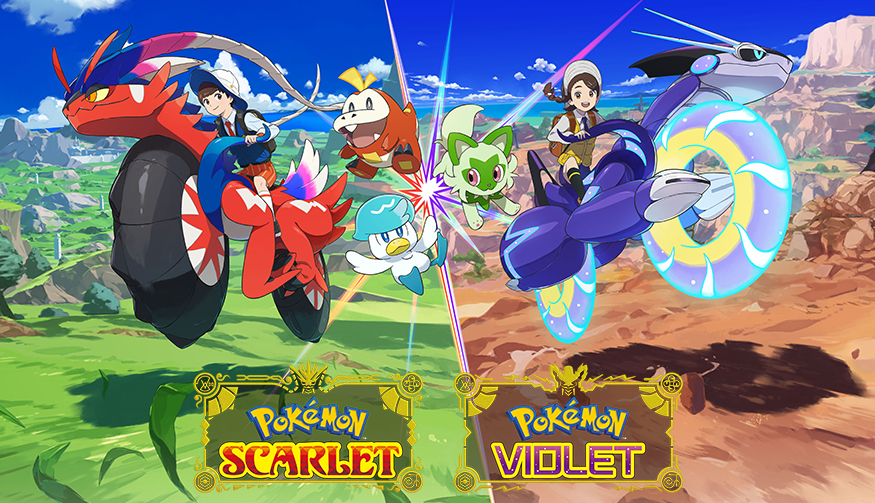 Missed today’s Pokémon Presents? Not to worry, now that the presentation has been uploaded, eager fans can now watch it any time they desire, but if you’ve come here seeking spoilers, well, you’re in luck. Along with sharing a recap announcement covering the majority of what was shown off, we’ll also be doing a quick list of the games/event that popped up, so you can skip to the parts that interest you the most:

During this presentation, we got to see more of Koraidon and Miraidon, the Legendary Pokémon that will join you on your adventure through the Paldea region in Pokémon Scarlet and Pokémon Violet. In these eagerly-awaited open-world RPGs, you’ll take on the role of a student at a prestigious academy. There, you’ll meet many new friends and embark on a Treasure Hunt to discover three grand stories—one of which includes the traditional Pokémon journey of challenging eight Pokémon Gyms with the aim of becoming a Champion.

There are plenty of new Pokémon to be found in the Paldea region, including a regional form of Wooper. You’ll also meet the delightfully squishy Fidough, as well as Cetitan, who can freeze its surroundings with its horn. But Paldea isn’t just home to new Pokémon—the mysterious Terastal phenomenon makes Pokémon shine like gems, provides a boost to a Pokémon’s type, and can even change some Pokémon’s type based on their Tera Type! You’ll be able to catch Pokémon with rare Tera Types by taking part in Tera Raid Battles with up to three other Trainers.

The 2022 Pokémon World Championships are fast approaching. Thousands of Pokémon Trainers will gather from around the world to take part in exciting competitions in the Pokémon Trading Card Game, Pokémon Sword and Pokémon Shield, and Pokkén Tournament DX. And for the first time, Pokémon GO and Pokémon UNITE competitions will give Trainers the chance to prove their skills and become the first-ever World Champions in those categories! There was even a look at the special 2022 Worlds–exclusive Pikachu plush that will only be available at the World Championships venue’s Pokémon Center pop-up. If you’re unable to attend the event in person, you’ll still be able to enjoy all the action with dedicated livestreams for each competition.

In Pokémon GO, creatures known as Ultra Beasts have been appearing at Pokémon GO Fest events all over the world. Don’t worry if you haven’t been able to attend one of those events, as these Ultra Beasts will gather together during the Pokémon GO Fest 2022: Finale, a global event that can be enjoyed by all Trainers on August 27, 2022. Trainers may additionally encounter Pokémon that they might not normally see in the wild, and there will be Special Research that grants an encounter with the Mythical Pokémon Shaymin.

You can also attract Pokémon not normally seen in your area with the new Daily Adventure Incense—a special Incense that can be used once a day and lasts for 15 minutes. Keep a close watch, as this new Incense might even attract Legendary Pokémon!

Pokémon UNITE recently celebrated its first anniversary! To commemorate this milestone, new Pokémon and features are being added to the game along with many events and campaigns. The celebration begins with Pika Party, a new type of quick battle available to play now. In these electrifying matches, all Pokémon on the field—both wild and player-controlled—are Pikachu!

Additionally, the Ultra Beast Buzzwole has joined Unite Battles. Its Beast Boost Ability will temporarily increase its movement speed and basic attack speed each time it knocks out an opposing Pokémon.

More events are planned for September. For now, be on the lookout for a first-anniversary special present including Unite licenses and Holowear for Blastoise, Pikachu, Snorlax, Lucario, and Sylveon.

Finally, the Legendary Pokémon Mewtwo has returned to Pokémon Café ReMix. Prepare lots of delicious drinks and dishes in a one-minute cooking challenge to fill Mewtwo up, and it will join your café staff. You can check out the August 2022 Pokémon Presents for some cooking tips that will help you accomplish this tasty goal. In addition to Mewtwo, you’ll also have a chance to add Victini and Latias to your staff, with Latios scheduled to appear in the future.

Be on your best behavior, everyone! The International Police officer Looker has arrived in Pokémon Masters EX alongside his Pokémon partner Croagunk. It should come as no surprise that this Poison-type Physical Strike sync pair can cause lasting damage by poisoning their opponents. Two of their attacks have a chance to inflict poison, and their passive skill Toxic Chance 2 can also leave your opponent poisoned after you pull off a successful move. If you’re up against an opponent that’s weak against Poison-type moves, note that Looker & Croagunk’s move On the Case! and passive skill Superduper Effective 9 will boost the power of supereffective moves.