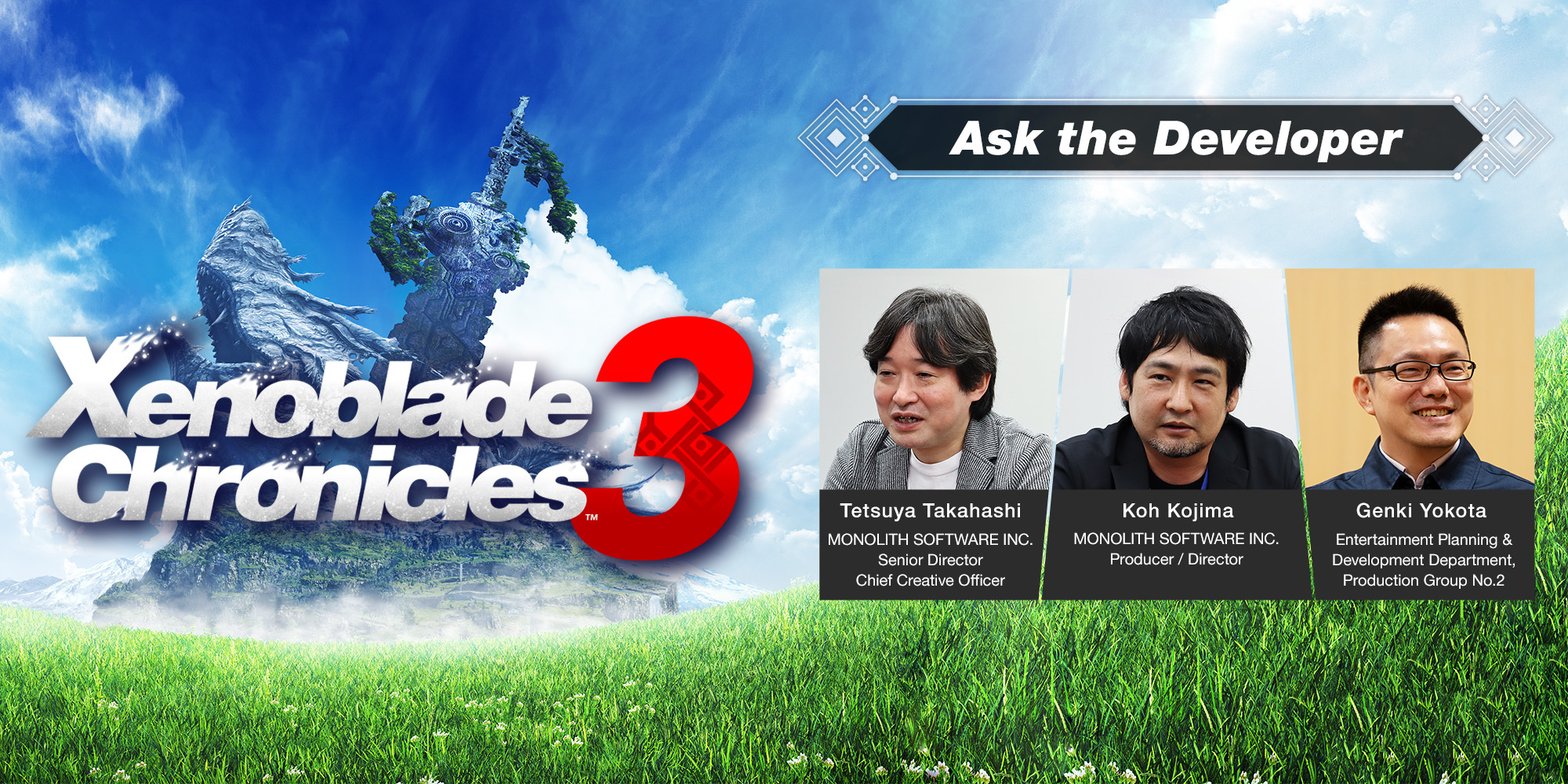 Nintendo UK has shared a new “Ask the Developer” interview on the Nintendo UK Website. For Ask the Developer vol. 6, Nintendo talks with Monolithsoft developers Tetsuya Takahashi and Koh Kojima, and Genki Yokota from Nintendo. The interview is broken into three parts with the first part published today and the other parts will be published over the next few days leading up to the release of Xenoblade Chronicles 3.

In part one of the interview, the three devs were asked about their role on Xenoblade Chronicles, as well as how the story of the game fits into the series and how it is a culmination of the series rather than just a direct continuation of the story.

We have an excerpt of the first chapter of the interview below.

First, could we start off with a quick round of introductions?

Tetsuya Takahashi (referred to as Takahashi from this point on): I’m Tetsuya Takahashi, senior director and chief creative officer at MONOLITHSOFT (1). As the executive director of the Xenoblade Chronicles series, I was involved in all aspects of the project for this title, including the initial planning and script writing, as well as supervising and directing a thousand other details.
(1) MONOLITH SOFTWARE INC. A game development company and subsidiary of Nintendo that works on the Xenoblade Chronicles series. It also developed the Xenosaga series released by NAMCO LTD. (currently Bandai Namco Entertainment Inc.) between 2002-2006.

Koh Kojima (referred to as Kojima from this point on): I’m Kojima from MONOLITHSOFT. I was a producer and director for this game. At least that’s what my title says…
My main job was to coordinate between Nintendo and MONOLITHSOFT, and also between Takahashi-san and MONOLITHSOFT’s development team.

Genki Yokota (referred to as Yokota from this point on): I’m Yokota from Nintendo. My title was also producer and director, and as Nintendo’s lead, I worked on this game from the initial planning to completion. Simply put, I was the point of contact on Nintendo’s side for discussing game content with MONOLITHSOFT. Thank you for having me today.

Thank you. We have MONOLITHSOFT, the developer of the Xenoblade Chronicles series, joining us remotely, and we hope to hear both Nintendo and MONOLITHSOFT’s thoughts on this title, as well as the stages of development and trial-and-error experiences behind the scenes.

Now then, Yokota-san, could you give us a brief introduction to the Xenoblade Chronicles series?

Yokota: Of course. Developed by MONOLITHSOFT, Xenoblade Chronicles is a role-playing game (RPG) in which you can enjoy the characters and storyline created by Takahashi-san in a boundless, expansive environment. Rather than turn-based battles, you can enter battles seamlessly from the field with real-time control of the characters. It is a game you can play comfortably by making full use of timing and character positioning.

Thank you. So, this is the third entry in the series, but where does it stand within the series?

The first entry depicts how the main character and his companions living in the world of Bionis, the god, utilise the future-seeing blade, the Monado, to protect the world they live in and fight for the future.

The second entry depicts a story of finite and eternal life, in which the main character, who lives in the world of Titans up in the skies, meets an immortal Blade girl, and they work together to reach paradise.

This third entry is a story about six young soldiers belonging to two hostile nations, set in Aionios, where the worlds of the first and second titles link together.
(2) Launched in August 2011 as a Wii exclusive game. A remastered Xenoblade Chronicles: Definitive Edition was launched in May 2020 for Nintendo Switch.

If the setting of this title is linked to the first and second entries, does that mean that the story continues through all three titles?

Takahashi: No, the stories of one, two, and three all stand alone. Although some elements and designs from one and two will appear in this third entry here and there, there is no need to have played the first and second games to understand the story or how to play.

However, since this is a series of works, the underlying theme is consistent, and in each case, the story unfolds based on “the relationship between foreign things”.

Yokota: So, by “culmination”, you don’t mean that it brings closure to the series, but rather that it rounds out the trilogy thematically.

Takahashi: Yes, that’s right. I guess you can say that this is like a summary for moving on to the next step in the future.

I see. Now, I would like to dig deeper into this title’s story – the “culmination” of the series. How does the story for Xenoblade Chronicles 3 begin?

Takahashi: This story’s starting point is “unreasonable power”. The story itself begins on a battlefield. There are two hostile nations, and for the young people living there, the world is a place where fighting is a part of everyday life.

Then, young people from these two nations band together against this “unreasonable power” that forces them to fight on a daily basis. The story is about how they, with their inherently different ideas, cultures, and histories, will resist this great power.

If you enjoyed what you have read so far and would like to read more of the interview then be sure to visit the Nintendo.co.uk website by clicking on any one of the two links below.

Chapter 2: A sound that hasn’t been heard before

Chapter 3: We have a thing for abundance