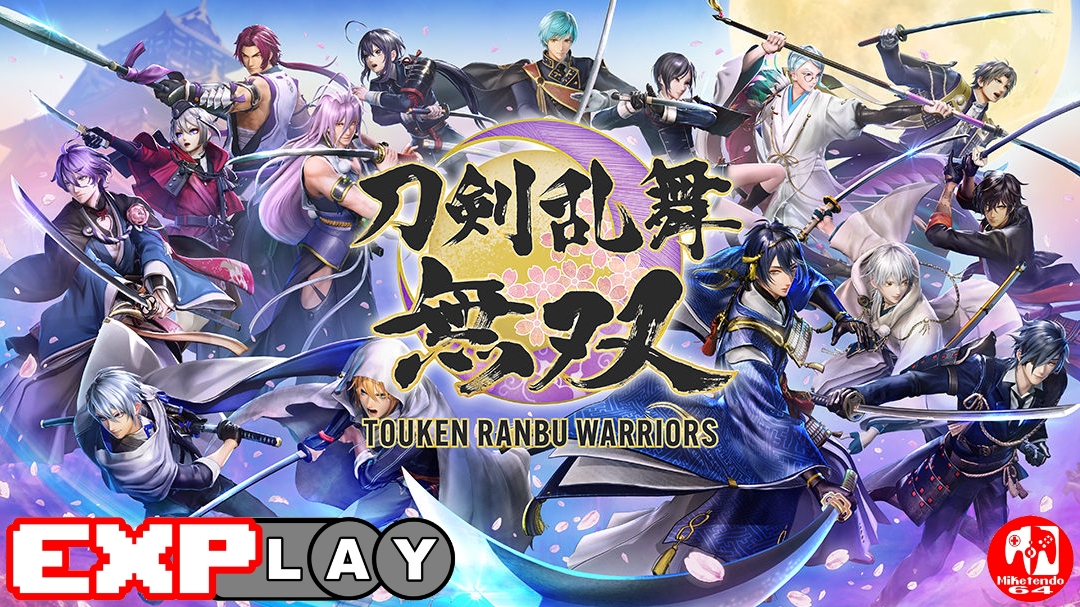 Welcome to EXPlay, (Explain & Play) the review series where we care not for scores but tell it how it is when it comes to every game we get our hands on, whilst also taking the time to include some lengthy gameplay, to give you the reader, the chance to shape your own impressions and views whilst watching and reading. In this instalment, we’re covering Touken Ranbu Warriors by developers, Omega Force along with DMM GAMES and NITRO PLUS.

In 2015, the joint efforts of DMM Games and NITRO PLUS would result in a browser based, free-to-play collectible card game, entitled Touken Ranbu. A game that puts players in the role of a Saniwa sage, who must traverse historical events in a bid to battle a formidable evil, wishing to change the course of history. As a sage, however, players possess a special player that allows them to take famous blades and give them a new lease of life, by giving legendary weapons humanoid forms referred to as Touken Danshi. A worldwide release would not occur until 2021, but Touken Ranbu swiftly soared thanks to a live-action film, three anime productions and even “two separate productions of a long-running stage play series,” and now Touken Ranbu is going musou!

The Touken Danshi are back and with fifteen of them to choose between, players will have plenty of handsome men to choose between, but yes, it is an all-male ensemble, including the characters that look more feminine than masculine. Similar to Touken Ranbu, Touken Ranbu Warriors have a similar premise in terms of story. Once again players must traverse historic periods in time and right the events of the past, battling against the History Retrograde Army in the process, except this time, there is no Saniwa Sage and if not for the Government of Time, the Touken Danshi would be all alone in their honmaru.

For the first time in a video game, Touken Ranbu has finally gone 3D and even without the cutscenes, various character animations and general character designs, there can be no denying just how much of a gorgeous game Touken Ranbu Warriors really is. Touken Ranbu Warriors is visually stunning on almost all accounts, save for environments and some backgrounds, but hey, at least the special attacks are stylish in their delivery and mix and matching your combos are just as fun as they have always been in a musou game. Just, please don’t go expecting an English soundtrack as you will find yourself potentially disappointed as it is Japanese only. However, as a game inspired by Japanese culture, featuring the fabricated historic past covering the Sengoku era, the Japanese voice acting only adds to the conflict and dialogue taking place.

In terms of gameplay, Touken Ranbu Warriors is a game of three sides. One is the main event, the hack and slash gameplay, which sees players engage in Sorties, the game’s story mode battles, which will see players presented with various chapters, spilt into various overall missions, which are then broken up into smaller segments, resulting in small stage battles players can beat between 1-10 minutes in most cases. The further into the game’s story you go, the longer some missions will take, especially if your characters are under levelled. I do love how the developers handled this part of the game though, as I feel it is incredibly gamer friendly for those who are unable to play longer sessions. All the more so when you are a Nintendo Switch gamer, playing Touken Ranbu Warriors on a train, as part of your daily commute.

When playing the missions, players are told beforehand what objectives they are required to complete in order to restore history the way it was meant to have played out, but on some missions, players will need to investigate maps in their entirety to discover secret objectives that will result in the correct ending for the given stage and avoid ending in failure. For the most part though, unless a stealth-based mission where you need to avoid levels, Touken Ranbu Warriors really is as simple as selecting from the list of characters available, taking note of who offers the best exp, item or bond type of boosts and away you go, mashing buttons until everyone who needs to die is dead and you did everything right.

As for the other two main parts of Touken Ranbu Warriors gameplay loop, they all take place at the Touken Danshi’s honmaru. A home base where players are free to access the game’s shop, equipment items, unlock abilities for their preferred living weapons, access the game’s memoirs, special challenges and save their progress. The honmaru is also the place to go as a fun little feature where they can dispatch Touken Danshi to perform tasks within the honmaru and the more you do, acquiring your results after each Sorties, the more characters can level up, as well as the honmaru itself. As the honmaru levels up, players can obtain new items from the shop and unlock new areas within the honmaru, allowing you to send two characters to the same place, helping to increase the bond level between them.

It is during the honmaru events, players can access to a range of minigames ranging from stopping three statues, trying to make sure they all do the same pose, harvesting shiny spots in a garden to help acquire vital materials, and there’s even one, where players need perfect timing just to brew the perfect cup of tea. Each game is very short and even if you can’t achieve a great success, even a regular success or a failure, it can still be worthwhile nonetheless. Plus, the extra feature is something players can choose to ignore should they wish, but it is still fun nonetheless.

When it comes to musou games, Koei Tecmo have really knocked it out of the park with Hyrule Warriors: Age of Calamity and Persona 5 Strikers. Still, just because Fire Emblem: Three Hopes look set to take the crown for 2022’s best musou game, let’s not write Touken Ranbu Warriors off just yet. The lack of diversity of weapons might be a disappointment and in no way is the Touken Ranbu brand as popular as that of Fire Emblem, but Touken Ranbu Warriors is still a special game nonetheless. It is an ideal musou for those with less time to play and still full of content to entice those with hours to burn, to keep playing. Plus, if you really like what you see, as a Koei Tecmo title, there is a deluxe version for those who want more, lots of DLC and a free demo available now, which allows players to play through the prologue and still have your progress carry over.