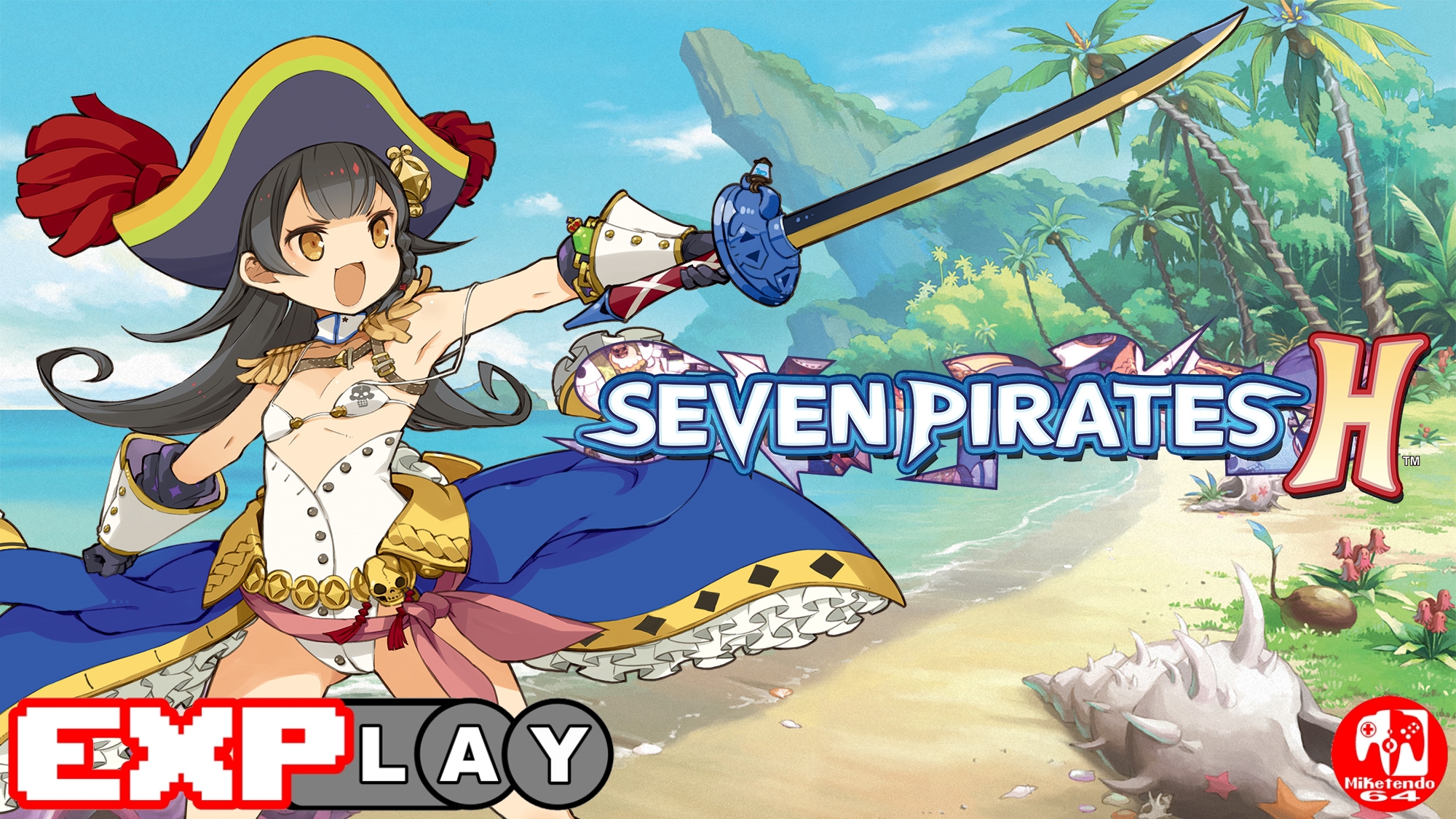 Welcome to EXPlay, (Explain & Play) the review series where we care not for scores but tell it how it is when it comes to every game we get our hands on, whilst also taking the time to include some lengthy gameplay, to give you the reader, the chance to shape your own impressions and views whilst watching and reading. In this instalment, we’re covering Seven Pirates H by joint developers, Idea Factory and Felistella.

Are you ready for an ecchi adventure? Then hoist up the main sail, raise the colours and bring up the anchor, because an exciting journey awaits in the Monsupi Sea and Seven Pirates H, the fourth instalment in the Genkai Tokki series of games. First released as Seven Pirates on the PlayStation Vita in 2016, comes a faithful remaster that sees the Nintendo Switch release, gifted with an updated HD presentation, coupled with touch-screen controls and rumble features, which work like a charm, but we’ll touch on those a little later on because now is the time to talk about the Chosen One.

Meet Parute, a female pirate that wishes to become a legendary pirate in her own right. Her beliefs in being the Chosen One might seem a little strong in the beginning, but it is her faith in herself that will keep her alive when she ends up shipwrecked in the Monsupi Sea. First joined by Otton, an otter-like “boy monster,” who is pervy in nature, wears a women’s pair of underwear for an eye patch, it is Otton who will steer Parute to victory and help her master her destiny. His efforts might seem unconventional at first, especially his tutelage of Booby Training, a mini-game of sorts that increases a character’s stats and breast parameters, but if it was not for him, Parute would not encounter six helpful allies she could rally to her cause.

In terms of gameplay, Seven Pirtates H is not your conventional RPG. Battles are turn-based and players are free to explore each of the game’s dungeons, most of which only consist of one area, but instead of earning experience to level up, you earn H Extract. Collect enough extract and players will obtain Training Extract for specific characters. The training extract is used as part of the game’s Booby Training stat-boosting mini-game, where players can interact with each of the titular seven pirates, and train them by altering their bosoms. Be it making them larger, higher, perkier, softer, or just widening the distance between a character’s cleavage, everything helps to strengthen your chosen party of four.

Except, there is more to Booby Training than just that as Seven Pirates H has two ways for players to interact with this segment of the game, be it by using standard button controls, or using the game’s diverse touch-screen based inputs. Then of course there are other extracts that help to drastically augment a character’s breasts faster, and players are also able to collect a huge selection of eggs. When cracked, eggs can give you various items of different rarities, but in order to break them, your preferred character must break the eggs between their breasts and yes, they can end up with egg on their face and more, when the eggs do not possess an item.

Another means of boosting a character’s stats, other than with Booby Training, is via an assortment of underwear that can be earned in-game and equipped to your preferred pirates. In keeping with RPG antics, there is also a wide array of side quests available in the form of Requests, which can reward players in new bikini tops and bottoms, gold and more. There are also three types of Booby Kin that can be obtained, be it merchants who will allow you to acquire more goods, scholars who are great for uncovering useful items and pirate Booby Kin, who can help out in battle, thanks to new skills for your pirates to use.

When not exploring the game’s dungeons, players are treated to an oceanic overworld, where they can sail a pirate ship, but the earlier you are in the game, the less places you will be able to explore, as the majority of the map will be covered with clouds and I hope you love a spot of reading, as there is plenty of text to read through. With Japanese voice acting only, the many characters of Seven Pirates H have plenty to say and there is a whole assortment of events to watch and wade through. At the very least though, there are plenty of jokes and a lot of humour on show, which isn’t all ecchi-based.

In terms of graphics, while the designs of some of the monsters looks a little uninspired compared to some bland backgrounds, the true attention to detail are on the main characters themselves, be it the monster girl bosses you’ll face in combat, or just the pirates who will become part of Parute’s crew. Also, prepare yourself for a rather upbeat and very peppy soundtrack, which often switches between infectious to mild annoyance, throughout the entire experience, however long or short you choose to play for.

What’s more, on top of the content stated above, Seven Pirates H also comes with the added bonus of having all previously released DLC, readily available from the get-go and players are free to enable or disable it, before they even start a new playthrough. Additionally, even when you do beat the main game, you can either stay on course and complete additional requests, or start afresh with a new playthrough, with some of your progress carrying over.

By no means was Seven Pirates H ever going to be a game accepted by all due to its ecchi nature, but not every game is for every gamer. We are entitled to like what we like, and we are allowed to enjoy it. Many RPGs over the decades have been risqué and sexually glorified the characters in them. Seven Pirates H is no different and it does offer a role-playing experience that fans of the genre can still enjoy. At the same time, the very boob nature of the game has actually become a major component of the game. It’s not just an artistic detail for players to look at, but a different take on Pokémon IV training or skill trees.