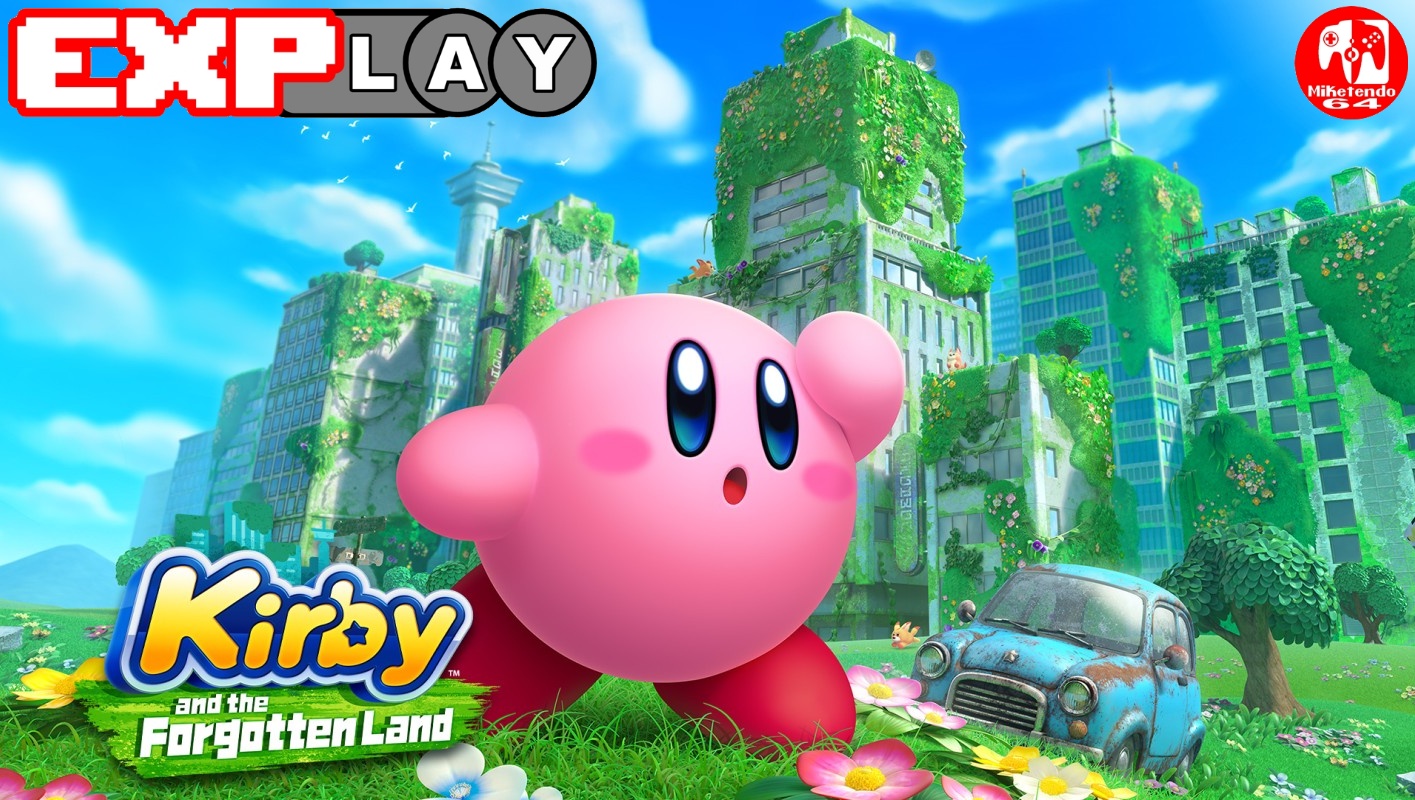 Welcome to EXPlay, (Explain & Play) the review series where we care not for scores but tell it how it is when it comes to every game we get our hands on, whilst also taking the time to include some lengthy gameplay, to give you the reader, the chance to shape your own impressions and views whilst watching and reading. In this instalment, we’re covering Kirby and the Forgotten Land by developer HAL Laboratory.

Kirby and the Forgotten Land: (The Explanation)

At last! Kirby and the Forgotten Land is out now on Nintendo Switch! We had so much fun with the game’s demo that we just couldn’t wait to jump into the full game as soon as it was available. Now that the game is here, we wasted no time immersing ourselves in Kirby’s epic 3D adventure.

Kirby and the Forgotten Land follows the titular Kirby on an all-new adventure. One day, Kirby was out and about and gets sucked into a vortex all of a sudden. Everything goes black and when Kirby awakens, to find themself on a beach in some strange world far from Planet Popstar. Kirby ventures inland to discover a huge city that has long been abandoned by society and has fallen into ruin. However, it is far from uninhabited as enemies, familiar and new, have made themselves at home in the urban wilderness.

As Kirby wanders throughout this forgotten land, a disruption occurs nearby and Waddle Dees are seen scurrying away from birds carrying cages to trap them in. The birds are successful in capturing the Waddle Dees and Kirby sets out to save them and makes a new friend in the process called Elfilin.

In Kirby and the Forgotten Land, players can explore numerous regions like abandoned cities, theme parks, winter wonderlands, and wastelands from an overworld. Each region of the overworld is made up of several stages where Waddles Dees have been captured and taken to. You must play through each stage and rescue as many of the Waddle Dees as you can. Some are found trapped in cages, and others can be rescued by fulfilling certain requirements in the stage.

Upon clearing a stage, players can move onto the next in progressive fashion or opt to take part in any of the “Treasure Road” challenges that appear in the overworld. Near the end of each region, there is a boss stage that will unlock once you have cleared all previous stages and have rescued enough Waddle Dees. When the boss has been put to rest, you can then move onto the next region.

By default, Kirby can only jump, float, dodge, and inhale. Kirby can inhale objects and launch them in any direction on the X axis (Kirby cannot launch them upwards or directly beneath). When Kirby inhales certain enemies, however, Kirby can use their abilities instead of inhaling. These abilities can grant Kirby a sword, chakrams, ice, fire, hammer, wind, a drill, and even guns! Some of these are staple copy abilities from previous Kirby games but the gun and the drill are new abilities making their debut in Kirby and the Forgotten Land.

There are a total of 12 copy abilities for Kirby in this game which may seem measly to veteran Kirby series players who are used to having many more to choose from in previous titles. To make up for this though is the new mechanic “Mouthful Mode”. When next to special objects like a vending machine, locker, lightbulb, traffic cone, or a car, Kirby can inhale them and use them temporarily. These objects give Kirby new attributes like driving around, puncturing water pipes, or illuminating dark areas. There are more objects that Kirby can use with Mouthful Mode but we shall omit them from this EXPlay as not to reveal all of Kirby and the Forgotten Land’s surprises.

Going back to the Waddle Dees that you rescue in the game; they make themselves home in Waddle Dee Town that was destroyed at the beginning and get to work rebuilding it. From absolute ruins, Waddle Dee Town soon becomes a couple of buildings like shops, a cinema, a café and a few houses. As you continue to rescue more Waddle Dees and progress further in the game, more buildings and amenities will be added including a colosseum, a game shop, and a quaint little fishing spot. The game shop, café and the fishing spot offer an enjoyable reprieve from Waddle Dee hunting, level exploration, and boss bashing in the form of mini-games. Doing these are totally optional but if you do play them and do well, you can earn yourself some special Gotcha Toys.

Speaking of Gotcha Toys (more commonly known as Capsule Toys in the real world), these little figurines aren’t just restricted as prizes from mini-games. They can also be earned as rewards from certain characters in Waddle Dee Town as well as found hidden throughout each of the game’s many stages. Gotcha Machines can also appear in Waddle Dee Town as well though it is worth pointing out that while the majority of the Gotcha Toys can be found in stages and in the machines, those that are rewarded by the townsfolk are exclusive and can only be received by them.

If you ever wondered what a 3D Kirby game would be like (like if Kirby went full-blown Super Mario) the answer is Kirby and the Forgotten Land. There is no mistaking the inspiration behind the game’s level design, but the creativity at play is still the wonderous and whimsical celebration of colour that Kirby games are known for.

Handling like a dream, with plenty of eventful puzzles to work out, secret routes to uncover, a multitude of minigames to play through and plenty of Waddle Dees to save, Kirby and the Forgotten Land is Kirby at its finest, just don’t go expecting every future title to be a 3D outing as the developers themselves, have stated they believe both 3D and 2D games can co-exist and that is a reality we look forwards to living in going forwards. Kirby and the Forgotten Land: (The Gameplay)