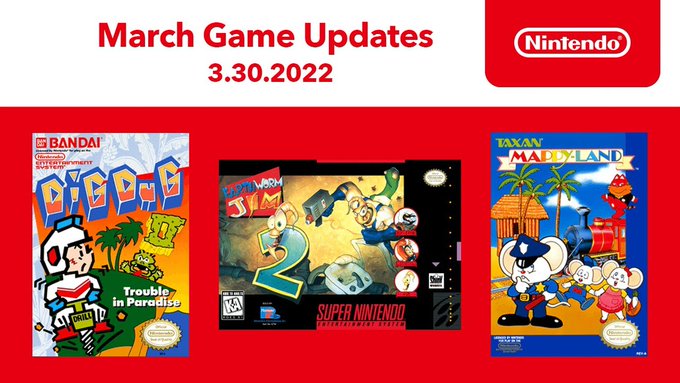 All games are available right this very minute, but additional SNES surprises have also been included, thanks to the release of SP versions for Super Mario World and Super Punch-Out!! and we have complete descriptions for each game, here:

Dig Dug has decided to take a vacation on a remote island, but the Pooka and Fygar won’t give him the chance to rest! In each round, clear out the enemies by inflating them until they burst or digging up traps for them to fall into. But be careful that you don’t get too close to their attack or fall into your own traps.

Help Mappy make it back to the party in time!

Mappy the police mouse has prepared all kinds of wonderful presents for Mapico and Mappy Jr. But the big cheese of the feline world, Nyamco, has ordered his clowder to hide the presents throughout Mappyland. If he’s going to get the gifts to their intended recipients on time, Mappy will have to double-time it on finding them! Avoid and activate traps to knock out those craft cats headed your way. You can also use special items hidden in the level to distract them. Collect six of the same presents to move on to another stage.

Can Mappy make it through all eight towns and survive the onslaught of claws?

Return to the wacky world of Earthworm Jim 2!

In this wild platformer for the Super NES console in 1995, you worm your way back into your super suit and take on the role of Jim, the annelid with attitude! The plot picks up after Jim’s successful rescue of Princess What’s-Her-Name and his less-than-successful attempts to woo her immeditately thereafter. Just when it seemed the princess would have a change of heart, the evil Psy-Crow swooped in and kidnapped her, eager to claim the crown for himself. Now it’s up to Jim to stop their wedding, following their trail from planet to planet. But he’s not alone this time-his pal Snott is along for the ride.

Jump, shoot, swing, and slime your way across 10 different levels, catch Psy-Crow, and rescue the girl of Jim’ dreams!

Now you can see what lies beyond the Special World!

In the Super Mario World game, the look of the world helps give the game its atmosphere. This special version gives that look a twist. Once you clear the Special World and arrive back in Dinosaur Land, you’ll notice things are a little different from how you remember them… Why not start a fresh adventure to see what this strange world has in store?

A punchy line-up of 16 rivals!

In this special version of Super Punch-Out!!, you can take on every major circuit and every opponent. On top of the MINOR CIRCUIT, MAJOR CIRCUIT, and WORLD CIRCUIT options, you can also select SPECIAL CIRCUIT, which is normally only available to those who have claimed victory in all other circuits. In SPECIAL CIRCUIT, challengers will face four boxers: Narcis Prince, Hoy Quarlow, Rick Bruiser, and Nick Bruiser. If you need to practice up, check TIME ATTACK MODE first! The highest SPECIAL CIRCUIT score among the staff at the development time was apparently 583,550. Think you can beat that?

Incidentally, over in Japan, instead of getting Earthworm Jim 2, Japanese subscribers have received Harvest Moon.