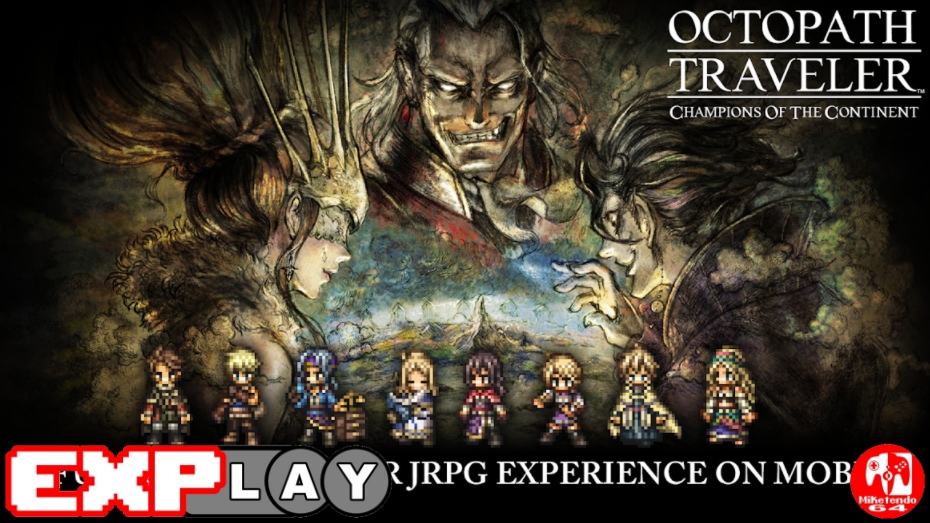 Welcome to EXPlay, (Explain & Play) the review series where we care not for scores but tell it how it is when it comes to every game we get our hands on, whilst also taking the time to include some lengthy gameplay, to give you the reader, the chance to shape your own impressions and views whilst watching and reading. In this instalment, we’re covering OCTOPATH TRAVELER: Champions of the Continent by developer Team Asano.

OCTOPATH TRAVELER: Champions of the Continent: (The Explanation)

When Team Asano first released the rather brilliant OCTOPATH TRAVELER back in 2018, they ended up surprising the world by announcing a prequel that would release in 2020, only it wound up being exclusive to mobile devices with Japanese being its only supported language. With the rest of us scratching our heads and eager fans hoping for a port, Team Asano would go on to develop and release both Bravely Default II and TRIANGLE STRATEGY before at long last, declaring the mobile game will launch worldwide in 2022.

While we still need to wait a while longer for the full release, the lucky few who pre-registered in time, were granted early access earlier this month to the game’s closed beta and we’re fortunate to be able to count ourselves among the lucky few. As you would expect, OCTOPATH TRAVELER: Champions of the Continent is a turn-based RPG, but where it starts to differ to its console counterpart, is in the fact the prequel utilizes touch-screen controls, in the form of swipes for movement and screen taps for interaction.

You will also have to endure a tediously annoying tutorial before you can properly start playing and even when you have progressed far enough into the game to select your desired path, there are plenty of text boxes for players to read through and where voice overs and voice acting are available, prepare to be disappointed in the fact that the closed beta only offers Japanese voice overs.

Having said that, much like the console title, OCTOPATH TRAVELER: Champions of the Continent is still a stunning work of HD-2D art, accompanied by a banging soundtrack. The only issue though, is for such a beautiful game, it does feel a tad insulative that players can’t enjoy OCTOPATH TRAVELER: Champions of the Continent on a larger screen, where they can take in every creative detail?

Because it is a mobile experience, one that comes with in-game achievements that I did enjoy earning, it is worth mentioning that every time I was able to sit down and lose myself in OCTOPATH TRAVELER: Champions of the Continent, it was only ever able to hold my attention for 30-minute intervals, which isn’t necessarily a bad thing, as I often felt like I was accomplishing something, even if it was just grinding levels so I could beat the stronger enemies, but OCTOPATH TRAVELER: Champions of the Continent did noticeably drain my battery every time I played.

The simple truth is, if you love both OCTOPATH TRAVELER and TRIANGLE STRATEGY, OCTOPATH TRAVELER: Champions of the Continent is a must play experience. It’s a shame the experience is confined to mobile devices and players will not be able take part in lengthy sessions like they did with the console games, but there’s plenty of story and lore to read through, enemies to battle and more of Orsterra to explore. Summer 2022 truly can’t come fast enough, but for those of you who are playing the early access demo, the downside is, no matter how far you progress, your save will not carry over to the full game and you will need to start over when you pick up the full game.

OCTOPATH TRAVELER: Champions of the Continent: (The Gameplay)