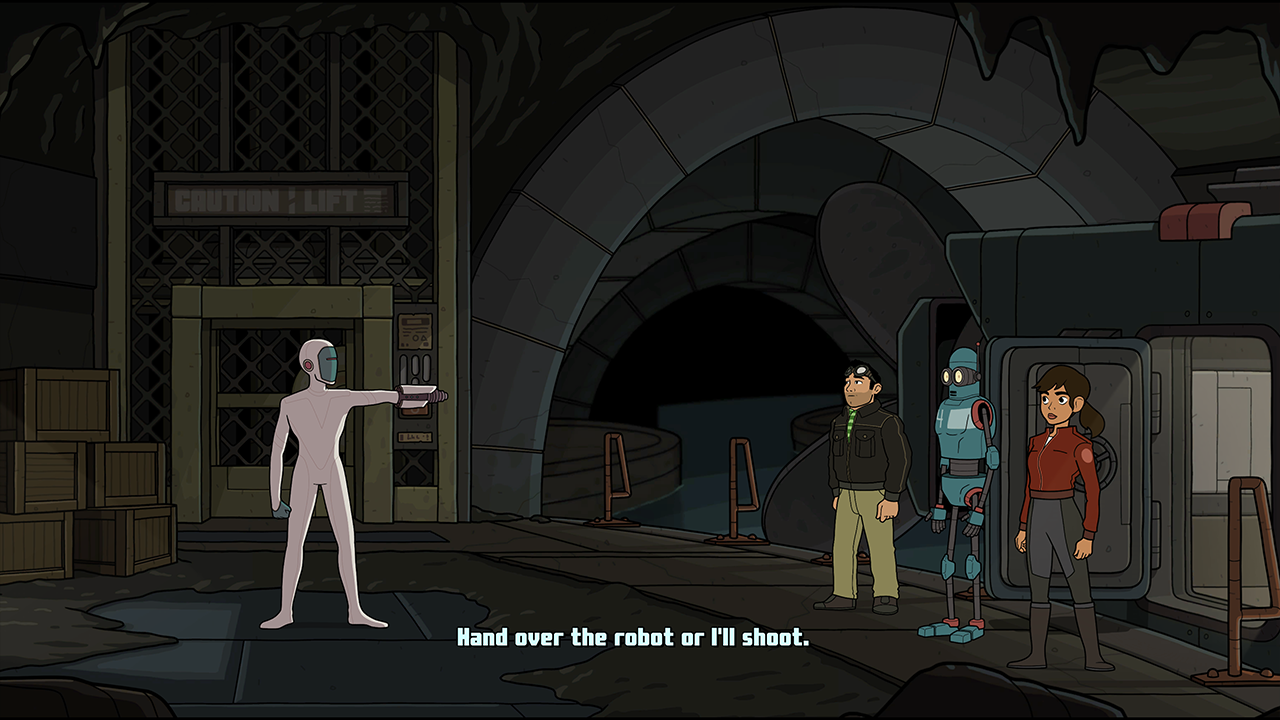 He said, she said…

Welcome back to another Miketendo64 interview that sees us chatting with Dexter Team Games’ Jeremy Fryc, regarding the upcoming Dexter Stardust: Adventures in Outer Space. In the third part of our mini-series comprised of Dexter Stardust interviews, we went back in time to learn all about Dexter Stardust’s development history and origin story.

Now we’re back with our fifth Dexter Stardust focused interview and this time we’re having a good old chinwag about dialogue, but first, let’s welcome back Jeremy:

Miketendo64: Point and click games are famed for their dialogue. For some, they make or break the game. Is there any line of dialogue that you created for Dexter Stardust: Adventures in Outer Space that will forever stand out as your favourite piece?

Jeremy Fryc: Yeah, I have a couple, but my favorite are all ad-libbed. In the game, “Planet X” and “Vrees” are two names for the same planet. I wrote a line for Munk (who plays Dexter) who responds to someone using one of those names while he uses the other. In response, Munk was supposed to say “To-May-toh, To-mah-toh”, but he ad-libbed “Tomato Tomato”. When I was editing his voice overs, I couldn’t stop laughing. It’s not the funniest joke, but it make me laugh.

Another one that Munk ad-libbed is in episode 4. It’s very reminiscent of the “how much wood could a woodchuck chuck” conversation from Monkey Island 2. Munk is not a gamer at all, and has never played that game, but somehow he ad-libbed this hilarious line while talking about “The Commander” with a menacing robot called the “Vanguard”;

Dexter: Who are you exactly?

Vanguard: I am a Vanguard of the Commander of Vrees.

Dexter: Uh… who is this “the Commander”.

Vanguard: He is the one who commands.

Dexter: What does he command?

Vanguard: He commands everything on Vrees.

Dexter: So, he commands man?

Dexter: And what if man doesn’t obey his command?

Vanguard: Man must obey his command.

Dexter: Has there ever been a man who has not obeyed the command of this man?

Vanguard: Never has there been a man who has not obeyed the command of this man.

I’m still shocked that Munk ad-libbed that final line when he was recording it by himself, in his attic. Amazing stuff.

Miketendo64: Just how long did it take to record the 6,000+ voice lines for Dexter Stardust: Adventures in Outer Space?

Jeremy Fryc: Too long. It’s funny because the game was basically “finished” in late 2019… and then when we were about to record, the pandemic hit. I mean, all the other aspects of the game were on me, it wasn’t too difficult to work on. I just needed to be focused and patient with myself. But when it came to the voice overs, I had to rely on other people… and when it came time to get people recorded… boom; the pandemic hits. So frustrating.

But my friends are the heroes here; Munk and Lola had the most lines. Munk actually plays Dexter, Uncle Jedo, Bayard (Dexter’s father), Little Dexter, and Chucho. Overall, he had well over 3000 lines of dialogue, maybe close to 4000. He lives in Northern California, and recorded those line last year (2021) when all the forest fires were going on.

He had to evacuate his house for a few months. It was crazy. He thought he was going to lose everything. But the fires stopped about a mile or two from his house. It was a really stressful time for him, but somehow he managed to perform all those lines with the enthusiasm you hear in the game. He’s amazing.

After getting all the lines recorded (and edited, which is sooooo boring and tedious), I realize why most devs choose not to include voice over; it’s just really hard.

But I’m so happy we chose to do so. I mean, if it wasn’t for the game, it’s possible that Munk, Lola, Alec, and I would have lost touch after all these years, now that we all live in different parts of the world. But the game is like this thread keeping us connected. No matter how the game performs, our friendship is priceless.

Dexter Stardust: Adventures in Space releases on Nintendo Switch on March 3, 2022. Now, while this instalment marks the end of our Dexter Stardust mini-series of interviews, don’t worry. There are plenty of other questions left to be answered and you will be able to see them all in our complete interview, coming soon to Miketendo64.

[Interview] Back to the Beginning with Dexter Stardust (#4)