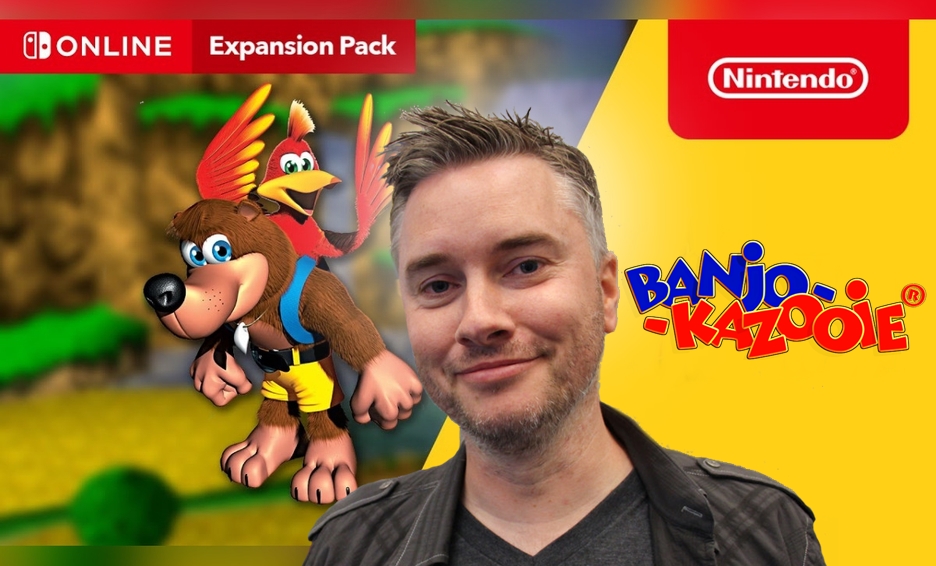 With Banjo-Kazooie coming to the Nintendo 64 – Nintendo Switch Online + Expansion Pack this January, we recently got in touch with the original character artist and animator that brought the bear and bird to existence. The one and only Steve Mayles! He is to Banjo and Kazooie like Shigeru Miyamoto is to Super Mario, and we are super excited to be able to talk to him about the return of Banjo-Kazooie to a Nintendo platform.

We would to thank Steve for agreeing to do this interview. We have been huge fans of Banjo-Kazooie since its release on the Nintendo 64 and we are over the moon to be able to jump back into the game over 20 years later on Nintendo Switch.

So, without further ado, it’s time to point those googly eyes further down the page as we begin our interview.

Miketendo64: Now, even though we are well aware of who you are, there may be some folks who aren’t. Could you tell us a little bit about who you are and what is your connection with Banjo-Kazooie?

Steve: I’m Steve Mayles. I worked at Rare Ltd from 1992-2014, mainly creating characters and animation. On Banjo-Kazooie, I created the Banjo and Kazooie characters/animation as well as many others as part of the 2-man character/animation team

Steve: It’s great to see BK back on a Nintendo console. Recently they appeared in Smash of course, which was a wonderful thing, and now they are back where it all began for them. Home, if you like. I designed them for a Nintendo console after all!

Miketendo64: Will you also be playing Banjo-Kazooie on the Nintendo Switch?

Steve: I do intend to playthrough the game on Switch. I paid for online specifically to play Panel de Pon again, so I just need to let the moths out of the wallet again for the extra Expansion Pack cost. I’m already dreading the Rusty Bucket Bay Engine room, I’m not sure I can go through that again.

Miketendo64: Where did you get the inspiration to create Banjo, Kazooie, and all the other colouful characters in the game?

Steve: Banjo’s origin, I struggle to remember, but transitioning from a human character (the boy Edson from Dream) to an animal, I think Tim Stamper must have suggested trying a bear, as I don’t recall any other animals being in the running (apart from a rival rabbit). Kazooie was more straightforward. She was born out of a desire to add realism to a double jump, simple as that. She is proportioned to enable her moves. I don’t think she is a full model in BK, just a collection of bird bits in the backpack!

As for the rest of the characters, I had a friendly rivalry with my BK buddy Ed Bryan, trying to make everything as good as possible. When a new level sheet went up in the corridor, we’d race to cherry pick the most interesting characters! Often a character would just have a few words description from design, giving us lots of freedom as long as it served the design brief.

Miketendo64: Would you like to see Banjo-Kazooie make a well-deserved return via a remake, remaster, or a completely new entry, be it on Xbox or a Nintendo console?

Steve: Of course! I’d love to see the bear and bird return! Remaster or remake first, maybe, to test the water, then big budget new game! The way things are going, Microsoft and Nintendo seem pretty friendly, so a new game could eventually appear on a Nintendo console? That’s where the fanbase is, right?

Microsoft will ask ” can we make any money from a new Banjo game?” Will enough people want it – it’s easy to think so looking at my Twitter feed, but that is rather skewed in favor of BK! The numbers will have to add up, but I’m confident if it was done right (i.e. it was awesome!) a new Banjo-Kazooie game would be a big hit

Miketendo64: How do you feel that even now, there are so many people who cherish these wonderful characters you have created?

Steve: It never fails to amaze me the amount of interest the game and the characters still get. We had a great team making BK back in ’97-’98, trying to make the best game we could, and I think it has stood the test of time exceptionally well. The great design of the game, how much fun it was, the iconic moves, the music, the dialogue, it all comes together to elevate the characters to new heights! Thank you to all the fans who constantly champion the bear and bird!

Thank you all for reading our interview with Steve Mayles, and thanks again Steve for answering our questions. Banjo-Kazooie will be available on Nintendo Switch Online + Expansion Pack on January 20th in the US and January 21st for Europe. If you have yet to see the new trailer for the game. be sure to check it out on Nintendo’s YouTube Channel.