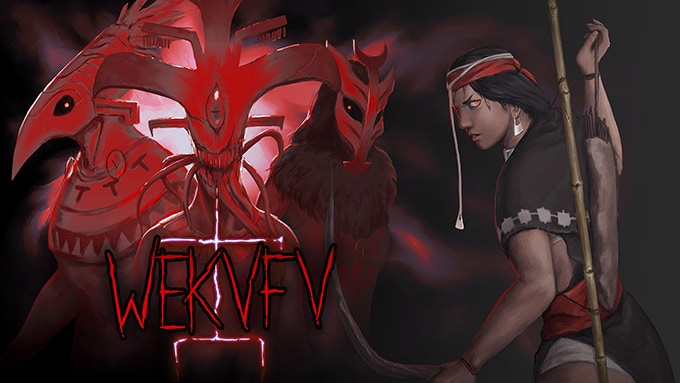 Hey all, we are back with part two of our interview with Stickerb Games to talk about their upcoming game Wekufu. In part two, we will be talking about the inspiration behind Wekufu and the its progress on Kickstarter. We also talk about a possible Switch release and why this game stands out against the others on Kickstarter.

If you haven’t read part one of our interview, we recommend checking it out before reading part two so you don’t miss anything.

To help raise awareness of the game, we have recently spoken with the game’s developer, Esteban Campos Millapel, to talk at length about himself, his studio and, of course, Wekufu.

Miketendo64: Where did the inspiration to make Wekufu come from?
Esteban: There are countless inspiration examples from the SNES era and beyond, but, believe it or not, what inspired me the most on making this game was Turok: Dinosaur Hunter, on the Nintendo 64. When I played that game, I was blown away, not only from the graphics and animations that where superb at the time, but because it featured a Native American character.
It kind of planted a seed that really grew on me and made me learn more about my bloodline, my culture, my roots. So, whenever I thought on making a game, every concept I made always had part of that culture. That’s how Wekufu came to be.
Wekufu’s storyline is inspired on a tale about the “Kallfümalen” (there are many stories about them, all extremely different from one another), a Mapuche Female Warrior that once appeared on an ancient confrontation, and helped her people fight, leading the Mapuche warriors to victory.
Miketendo64: You have started a Kickstarter campaign for the game. How is it going for you so far?
Esteban: The kickstarter started just a few days ago and so far its 7% funded! I’m pretty happy with the results and hope for a steady campaign until the end!
It has been difficult to spread the word about the game, as a solo dev I’m only familiar with developing games and promoting them is something that was alien to me.
Miketendo64: If you don’t meet your goal on Kickstarter, what will be the next step for Wekufu?
Esteban: So far Wekufu has been developed with no budget at all, while not meeting the kickstarter goal with definitely impact the development of Wekufu, I plan on continue working on it until the very end, even if takes years.

Miketendo64:  While it is not currently planned for a Switch release, is it something you would consider should Wekufu make it’s Kickstarter goal?
Esteban: Definitely, I’m a huge Nintendo Fan and would love to see its release on Switch, we have a Nintendo switch stretch goal after we hit our first goal and it would be awesome to release the game on Switch along with all other platforms. I’ll do my best to bring Wekufu to Switch, whatever the outcome.
Miketendo64: There are so many other games on Kickstarter, why should gamers and backers support Wekufu? What makes it stand out above the rest?
Esteban: Indeed, there are many awesome games out there on Kickstarter, and most devs have put all their heart into making them, and that’s not different from my project. Where I believe it really shines its in its connection with the player and its setting, it’s not just a metroidvania, it’s a game that wants to be natural, that wants to be a game of its own, rather than another game in the genre.
Even though it’s still in development, I think it blends really well its elements (Art, Audio and Gameplay). It’s a game that has its own mechanics that work within its setting, you might describe it with many genres, just like other games, but I want Wekufu to be Wekufu. So please look forward to it and help us fund and improve the game!
Miketendo64: Lastly, do you have anything you would like to say to your fans and our readers?
Esteban: Thank you so much for your support and the warm reception! The game has been unannounced for so long, and it just feels great to finally share it with everyone! Let’s spread the word about the game and make Wekufu the best version of itself!

Thank you all for reading our interview with Esteban of Stickerb Games. We hope you enjoyed reading about his game Wekufu and if you want to learn more about the game, be sure to check out its Kickstarter page.