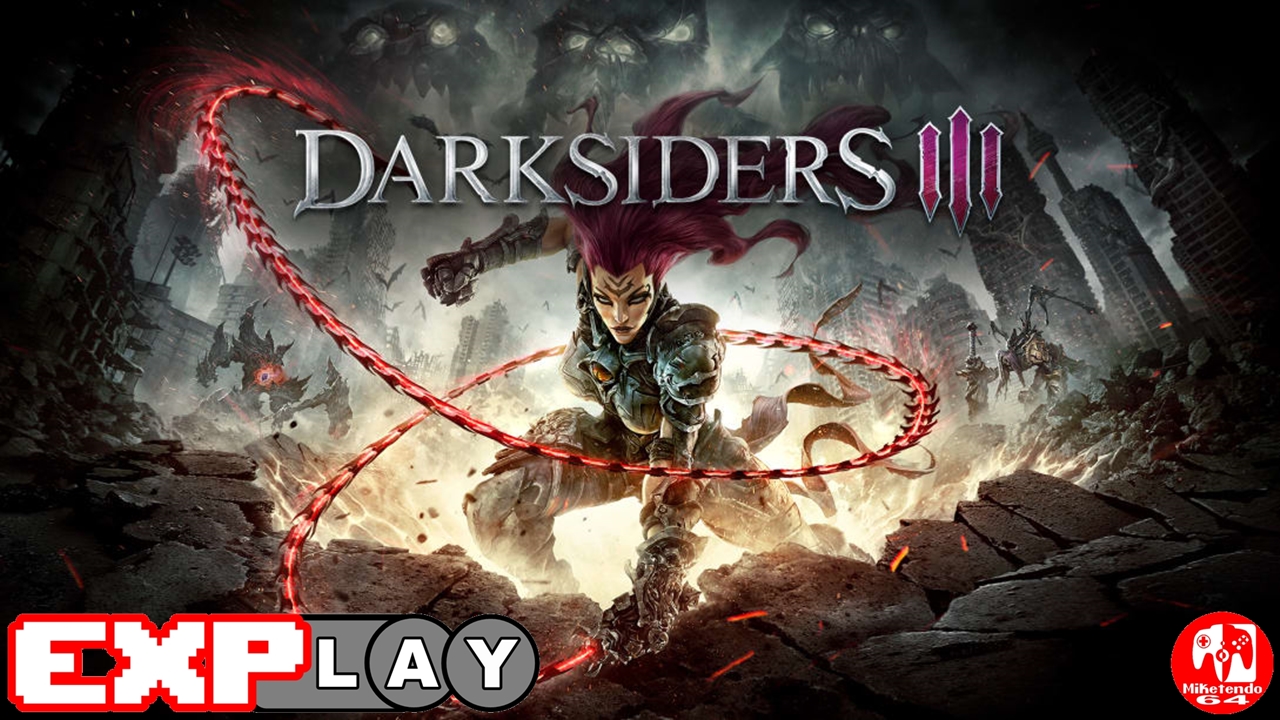 Welcome to EXPlay, (Explain & Play) the review series where we care not for scores but tell it how it is when it comes to every game we get our hands on, whilst also taking the time to include some lengthy gameplay, to give you the reader, the chance to shape your own impressions and views whilst watching and reading. In this installment, we’re covering Darksiders III by developer Gunfire Games.

Darksiders III is a third-person action-adventure with metroidvania style exploration. The gameplay differs somewhat from previous entries in the series with offering gameplay that is likened to more of a Dark Souls game. It is more challenging with multiple levels of difficulty and the extra option of Nightmare Mode that will result in your save data being deleted upon death.

As Fury, players must navigate their way through an apocalyptic Earth as well as the Hollows and Serpent Holes to search for the Seven Deadly Sins. Fury is armed with a whip and can use magic and the power of the elements to punish her enemies. She can acquire other weapons throughout the game including swords and metal claws and upgrade them by using materials found on her travels.

To give some of your weapons some extra oomph, you can collect Element Hollows that will instil upon you their power like fire, wind, and lightning. These charms so to speak, don’t just have physical attributes either. The Flame Hollow when activated for example, gives you the ability to wade through lava pits and reach hidden areas behind lava cascades. The other Hollows also have similar perks as well.

In previous Darksiders games, players are used to taking on large numbers of enemies at a time. The amount of enemies in Darksiders III are fewer in number but are a lot stronger. Taking on one on at a time can be easy pickings but finding yourself between three or four can result in a drastically reducing health bar and leaving you for dead in seconds. To give players a fighting chance, however, you can use the whip to hit multiple enemies at once and a well-timed dodge can open up for some damage dealing counters.

As you defeat enemies, you will recieve souls. These can be used to purchase items and  attribute points from the demon merchant Vulgrim (veteran players of the Darksiders series will be already familiar with this character). Attribute Points can be assigned to any one of three skill settings to make Fury stronger, be it with improved health, strength or Arcane damage. Every time you acquire an attribute, your character will level up but as it does, the price for the next attribute gets higher and higher. That is the price of greed after all.

Souls are not just obtained by defeating enemies, they can also be obtained by collecting and shattering Lurcher crystals. Some crystals may only have a few souls inside but others can be quite beneficial by having 400 or even 800 souls inside. Keep in mind that while you shattering lurcher crystals will indeed increase your souls count, I would only recommend doing that when you are actually going to spend them.

I say this because when you die (and you will die, a LOT), you will lose all the souls in your possession, except for those still inside lurcher crystals. It sounds sucky but you can reclaim your lost souls by returning to the place where you died. You should find a cluster of souls floating around in the area where you met your demise and by attacking them, they will return to you.

Darksiders III is a game that is considered the weakest in the series because it tried to break away from the formula of the last two instalments in the series. However, if you look back at all of the games (including the Darksiders Genesis spin-off) they all differ from each other in one way or another. One thing is certain though. I have been waiting for this game to come to Switch ever since it was announced.

After the other games in the series came to the console, it gave me a new hope that this one will also come to Switch at some point. Now that it has and I can finally play Darksiders III, I can honestly say that I am not disappointed. The combat can be pretty tough at times and there is an awkward clipping of sorts in cutscenes for some odd reason. On the whole though, I do rather like the change in gameplay style and how each game differs from the others and in a way reflects on how each horseman differs from the others as well.

Darksiders III may be a tough game to consider buying if you haven’t played any of the other games in the series but it is not necessary to play the other games first. The story of the main games pretty much run parallel to each other so won’t be missing out on much story wise. On top of that, you may even want to try one of the other games after beating this one so it’s a win-win!