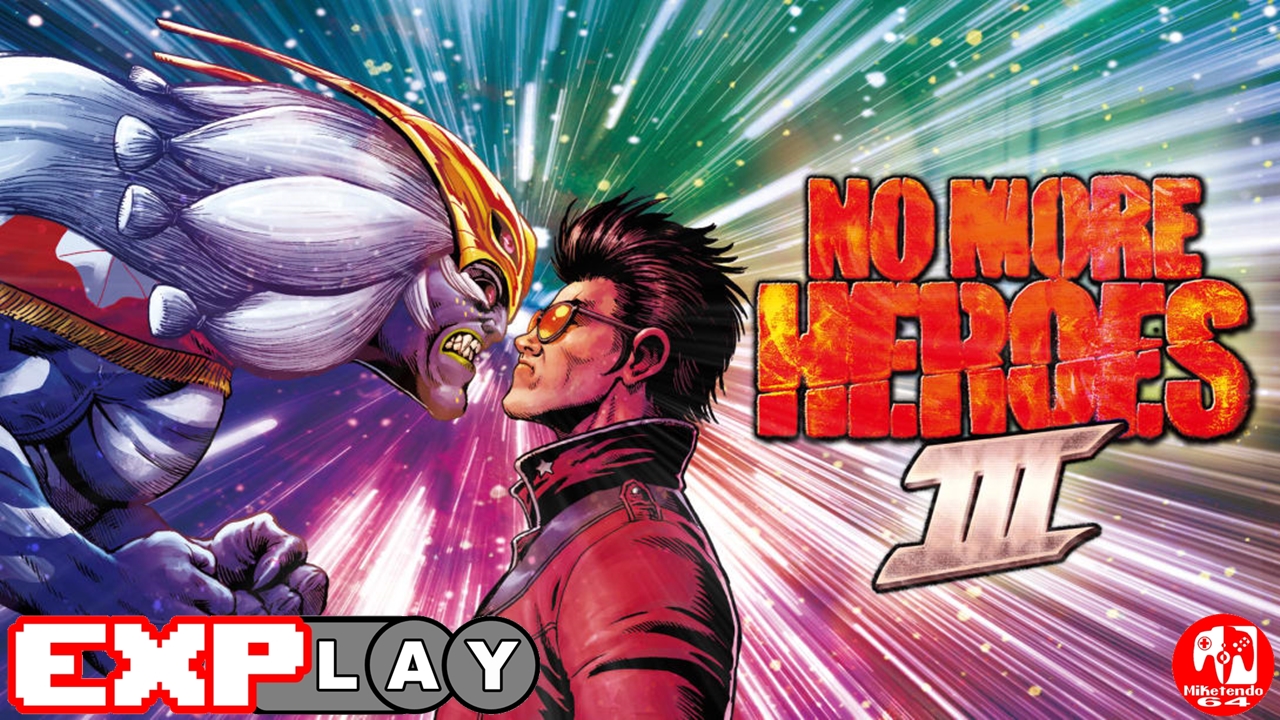 Welcome to EXPlay, (Explain & Play) the review series where we care not for scores but tell it how it is when it comes to every game we get our hands on, whilst also taking the time to include some lengthy gameplay, to give you the reader, the chance to shape your own impressions and views whilst watching and reading. In this installment, we’re covering No More Heroes by developer Grasshopper Manufacture.

No More Heroes 3: (The Explanation)

After a long hiatus, the Otaku Assassin has returned and this time, he is going galactic! When the universe’s most dangerous aliens invade planet earth, Travis Touchdown takes his Beam Katana in hand once again to show those aliens that he is not someone they want to mess with.

The main events for No More Heroes 3 takes place ten years after No More Heroes: 2 Desperate Struggle and some time after Travis Strikes Again: No More Heroes. However, the setup of the story takes place 20 years before when a young boy named Damon finds the alien Fu who crashlanded on Earth. Damon nurses FU back to health and helps it build a rocket so FU can return to its home planet.

Now in present day. Damon has grown up to be a powerful business magnate and i FU returns to Earth to see his friend but he hasn’t come alone. He is accompanied with an armada of UFOs and nine of the universe’s most deadliest assassins. FU has return to Earth with designs to take over the planet, with Damon’s help of course. To make things interesting, however, rather than take over with a full-on invasion, FU presents the people of Earth to challenge him and his squad of Goddamn Superheroes to compete in the Galactic Superhero Rankings.

From his motel room, Travis Touchdown hears the commotion of the Alien invasion outside and goes to investigate. In typical No More Heroes fashion, Travis finds himself in the thick of it once again of having to climb the rankings yet again to become the #1 top assassin but this time its not just of the world, its to be the top assassin of the universe.

No More Heroes 3 is a hack and slash game that has players fight enemies with a range of sword techniques, wrestling moves and death skills. Travis is armed with a beam katana similar to that of a lightsaber (a sword that has a beam of energy extending from it) and the Death Glove (think the NES Power Glove but deadly) and is tasked with fighting and defeating powerful bosses. As Travis defeats the 10 powerful assassins, his ranking among the UAA (United Assassins Association) Galactic Superhero Rankings will improve.

As Travis fights his enemies, he can use weak attacks and strong attacks with his beam katana. As he hits his opponents or they block his attacks, his beam katana will lose its energy. If it depletes too much, he will have to recharge it in a rather ambiguous manner that requires the player to shake the right wiimote up and down until the battery is recharged (you can also simply move the right Joystick up and down in handheld mode or if using a Pro Controller but where is the fun in that?).

If an enemy is stunned, Travis can take the opportunity to show off his Pro Wrestling moves and slam his opponent into the ground. Doing so will deal some heavy damage and recharge the beam katana at the same time. Upon successfullly killing an enemy, you can activate the Slash Reel that has a number of perks if you get three in a row. For Example, getting three 7’s will allow Travis to go all “Gundam Style” in Full-Armor Mode. This mode allows Travis to transform into a highly powerful Mech and fire off homing missiles at his enemies.

Travis’s other means of dealing damage is with Death Skills. He starts out with only one: The Death Kick but he will eventually unlock more, bringing the total up to four. These are activated by holding down the L button and then pressing any of the assigned directional buttons. These skills are effective but they each have a cooldown so it will be some time before you can use them again.

Getting back to the subgject of fighting the Goddamn Superheroes or Galactic Assassins themselves, simply finding and fighting each assassin is not a straightforward task. It never is when the UAA is involved. Before Travis can even get an audience with one of the top ranking assassin’s, he must participate in designated matches and then pay an exorbitant entry fee at a nearby ATM machine. In order to raise the funds, Travis can earn UtopiCoins through fighting enemies in Designated Matches and Defense missions, or by taking on part-time jobs.

Some part-time jobs can be quite menial like cutting grass or unclogging toilets but there are other jobs that will have you repel giant alligators using a tank! Some of these jobs are a “one and done” task but most of them have multiple levels of difficulty that will reward you more UtopiCoins as well as another commodity known as WESN (World End Super Nova). This second type of currency can be used back in the laboratory under Travis’ Motel room to upgrade his health, attack power and other parameters.

Much like in the first game, No More Heroes 3 features an open world that is ripe for exploration and is not just limited to Travis’ home town Santa Destroy. There are also 5 other regions to explore including Perfect World, Thunderdome, and Neo Brazil. Don’t worry about them taking too long to travel around on foot though as Travis has a brand new Schpeltiger Motorcycle to get around on (there is also Fast Travel available for regions you have previously visited). In each region, there are collectibles to find, part-time jobs to undertake and also T-shirts to acquire so there is always a reason to hop on the Schpeltiger Motorcycle and explore the six regions.

As is customary in No More Heroes games, Travis can alter his wardrobe with different T-shirts and outfits. Most T-shirts can be received but finding and talking with friendly T-shit aliens. They won’t simply sell a T-shirt though. You will need to meet their requirements beforehand which, differs between each T-shirt alien.

Even with everything that I have explained about No More Heroes 3, there are still plenty of features that I haven’t touched upon. For example, a couple of other features from Travis Strikes Again: No More Heroes have been implemented into this game but with new functionality. The Ramen Stalls from TSA:NMH have become Sushi Stalls and rather than simply boosting your health and attack power, each Sushi has its own perks and buffs that will temporarily improve Travis’s skills during combat.

Death Chips (also from TSA:NMH) have also been given a new functionality and can provide more permanent buffs as long as they are equipped. You can’t simply find Death Chips in this game like you could in Travis Strikes Again, however, you have to create them using whatever scrap you acquire during enemy fights or part-time jobs and UtopiCoins.

No More Heroes 3 is not just a sequel but a culmination of the gameplay and features from the three previous instalments in the No More Heroes series. It has the Open World exploration of the first game, the smoother combat of the second and the snazzy Death Skills of Travis Strikes Again: No More Heroes. The games pays tribute to the series as a whole and while it many not offer anything “new”, it does take everything that made the other games so special and pushes it to the next level.

Suda51 and the rest of the Grasshopper Manufacture team have truly created something unique with the No More Heroe series and it has a cult following like no other. While there may be some moments during the game’s storytelling that make you think “What? How?” the whole madness of it all and its surprisingly therapuetic gameplay (gotta love slashing those aliens to pieces, right?) is what has fans coming back to these games again and again.

No More Heroes 3: (The Gameplay)