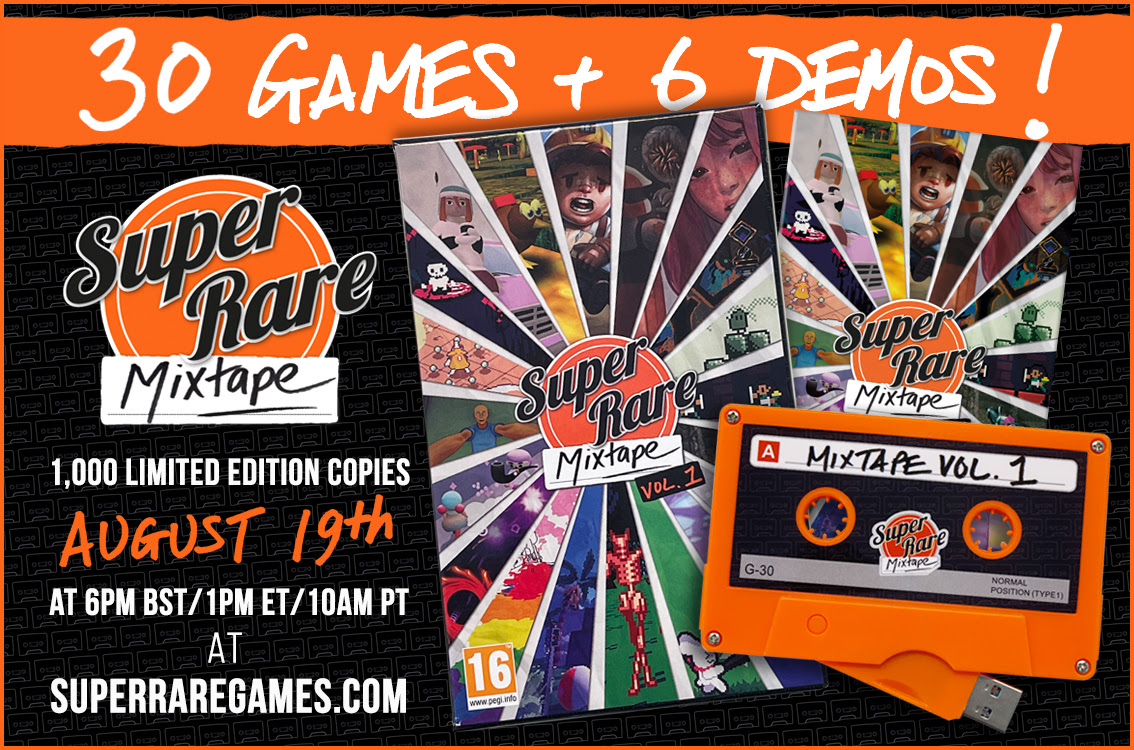 We’re incredibly excited to reveal Super Rare Mixtape Vol. 1 – a curated collection of indie games from some of the best and brightest up-and-coming developers.

Only 1,000 copies will be available for sale for this debut volume, which goes on sale August 19th at 6pm BST (10am PT/1pm ET) – available worldwide for £28 (+ relevant VAT & shipping) at superraregames.com

More details on this uniquely new concept below.

30 games – a curated collection of 30 varied games from small indie developers in the freeware scene – from retro first-person shooters and platformers, to visual novels, tower defenses, and quick experimental ideas, this is a showcase of pure creativity that finally gives these games the attention and preservation they deserve

6 demos – to fit with its PC compilation disc/PS1 demo disc type vibes, we’ve partnered with teams behind some of the most exciting upcoming commercial indie games to provide playable demos – including SkateBIRD, Grapple Dog, Billie Bust Up, and more!

USB tape cassette – your mixtape of games are fittingly featured on a tape cassette shaped USB, complete with a built-in custom launcher for easy plug ‘n’ play use on your Windows PC or laptop.

Please note that the Super Rare Mixtape is a USB 3.0 device that will work on most modern Windows PCs or laptops, but while most games are not very spec intensive, some older devices (i.e. Windows XP, Windows Vista) may have compatibility issues with some titles

Collector’s box – the gorgeous slim box, designed to fit in with your games collection, also includes a full-colour manual with a full page dedicated to each of the 36 titles and why we chose them for this collection

1,000 copies* – as a tester to see if there’s an audience for this uniquely new idea of physical collections of tiny indie games for PC, only 1,000 copies of Volume 1 are available for sale – hopefully we can make many more volumes in the future!

(*1,100 copies have been printed in total as additional units were needed for the many developer samples!)

Super Rare Games holds no rights for any included titles, which may continue to be available freely online, but has been granted permission for their use to preserve physically in this hand-curated lovely collection.

Hi! I’m Ryan (Toadsanime), the Head of Saying Stuff here and creator of the Super Rare Mixtape! You may know me from all of our newsletters & social channels.

I write this with legitimate tears in my eyes. I’ve had the idea for this personal passion project for many, many years now, long before my time at Super Rare Games, though I never believed that I’d be able to make it happen. In my teen years, I grew up in indie game community spaces like TIGsource, The Daily Click, 64Digits, long before indie games boomed into the commercial field with the launches of Super Meat Boy, Braid, Fez, and World of Goo.

Back then, it was purely hobbyist game developers creating whatever they wanted, often only shared with and played by other hobbyist developers. This scene still exists today in spaces like GameJolt and itch.io, which I remain a part of.

Over the years, my hard drive has amassed some 40,000 games from this scene! I once emailed a developer a copy of their own game as it no longer existed anywhere online, which made me realise how poorly preserved and generally unappreciated this space is.

Some of the most creative, original ideas in all of video games come from this community – in fact, many developers of freeware games I played many years ago have gone on to create beloved indie darlings, like Hotline Miami, Wandersong, Baba is You, Spelunky, Celeste, and Minecraft.

I have wanted to create a mixtape of curated games from this special, wonderful community for far too long, and the fact that I’m writing about it now with a copy finally in my hands is beyond surreal. It’s an incredible honour to have worked with so many talented developers to support them, preserve their games, and hopefully shine a spotlight on them to entirely new audiences.

This is well and truly a passion project, as anyone in my personal life could attest to me not shutting up about it over the past year. I’m exceptionally grateful to the rest of the Super Rare Games team for willing to try this new concept, purely for the sake of supporting & preserving indies’ – we know it’s not for everyone, and that’s OK, but hopefully enough people understand and enjoy it for us to make more volumes in the future. I’m already itching to work with 100s of talented devs I have in mind for future volumes, and I think you’ll love what the future could hold for the Super Rare Mixtape.

Thanks to the Super Rare Games team, all the developers, and everyone who grabs a copy for helping make this dream a reality – it means more than you’ll ever, ever know.