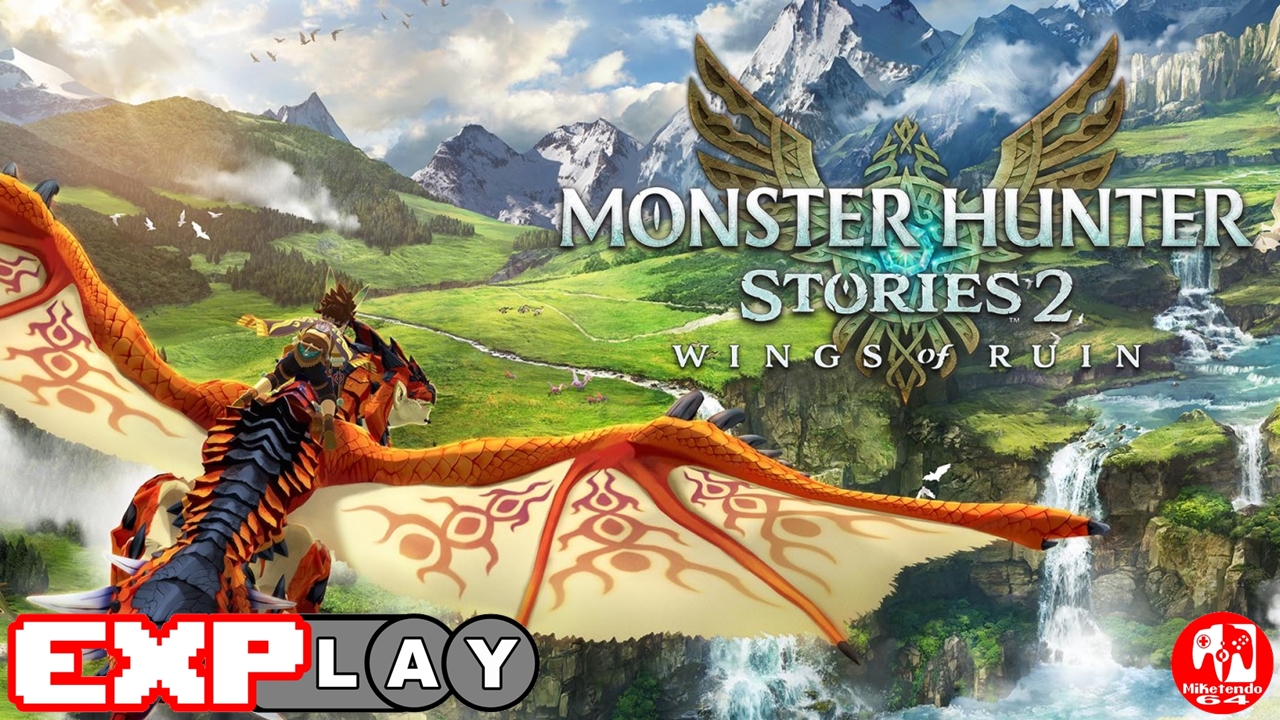 Welcome to EXPlay, (Explain & Play) the review series where we care not for scores but tell it how it is when it comes to every game we get our hands on, whilst also taking the time to include some lengthy gameplay, to give you the reader, the chance to shape your own impressions and views whilst watching and reading. In this installment, we’re covering Monster Hunter Stories 2: Wings Of Ruin by developer Capcom.

In Monster Hunter Stories 2: Wings Of Ruin, You play an unnamed protagonist who is the grandson of a famous Monster Rider called Red and lives in an island village. After a strange event occurs that scares away the Rathalos on the island, including Guardian Ratha, more and more strange phenomena occur with monsters on the island becoming more aggressive towards one another.

During a village meeting with the village Elder, your character wishes to help in the investigation and becomes a rider. The Elder agrees and enlists one of his best riders Kayna to be your teacher and show you the ropes. As you are just starting out, Kayna entrusts you with one of her own Monsties to help you fighter against other Monsters. To clarify, Monsties are monsters that you hatch from eggs and build a bond with. They will fight alongside you in battle and you can use them to climb vines, jump long distances and even swim in deep water.

The Monster Hunter Stories sub series doesn’t follow the same approach as the main series. It is more about raising Monsties to fight alongside you and only battle where necessary, rather than slay anything with a pulse and looks at you funny. Combat is also very different as it is turn-based as opposed to real-time action. You can select attacks and skills to fight opposing monsters.

There are three kinds of attacks: Power, Tactical, and Speed. These work in a Rock, Paper, Scissors kind of way, where one attack is better against another. For example, Power beats Technical, Technical beats Speed, Speed beats Power. If you are fighting a monster whose focus is on you, you will engage in a head to head. If you choose an attack that puts you to an advantage to theirs, you will nullify their attack. Sometimes though, you can still take damage but not as much as from a direct attack.

As you attack other monsters with your Monstie, you can build up a kinship gauge which when full will allow you to ride your Monster and perform a Kinship Skill. These can do heavy damage against monsters and if you synchronize the attack with a buddy, you can do even more. At times, you can also synchronize attacks with your buddy or any Monstie if you both use the same skill against the same monster. This too can do some serious damage against your opponent.

At the end of each battle, you can earn Zenny, experience and materials. Zenny is the in-game currency and is used to purchase items and buy/forge/upgrade weapons and armor. Materials are also use to forge and upgrade weapons and armor and can give your rider a very distinct look depending on the armor that you use. Lastly, the experience gained in battles, will level up your character and monsters and make them stronger in battles.

During the main campaign, you will fight tough Monsters in monster dens and upon beating them, you can take an egg from their nest. You can then hatch these eggs back in the stables at the village to add a new Monstie to your team. Some Monsties can be born with special skills or be taught special skills that will make them unique to other Monsties of the same species. You will also be able to name them but bear in mind that you can only take five with you at a time but you can edit your Monstie party any time at the Stables.

Monster Hunter Stories 2: Wings of Ruin is primarily a single player game but up to two players and take on co-op quests together and even engage in 1v1 versus battles and up to four players can participate in2v2 versus battles. However, the local and online multiplayer is unlocked only after reaching a certain point in the game so you will have to play through for a few hours before you can play with your friends.

Just like in Monster Hunter Rise, this game also supports amiibo. any amiibo can be used to unlock items in the game through a sort of lottery. The Monster Hunter Stories amiibo (this includes Stories 1 and 2) will unlock layered armor, the Monster Hunter Rise amiibo unlock stickers and any other amiibo will reward you with other items like donuts, bugs, and the like.

Monster Hunter Stories 2: Wings of Ruin is a really fun and engaging game. I love the Pokémon-esque monster battles and the fact you can use them to fight against your friends as well as against tough monsters. The story is much deeper than that of other Monster Hunter Games and it is a spin-off that really works.

Some Spin-off games seem to just cash in on the popularity of the main series to sell themselves but don’t really deliver on the promise. Monster Hunter Stories 2: Wings of Ruin delivers on its promise and is a much richer and rewarding experience. You don’t have to be a fan of the main series to enjoy this game as they offer totally different experiences. If you like a single player RPG that you can sink your teeth into that allows you to build a formidable team you can use to fight your friends in fun battles. this game should definitely be on your list.