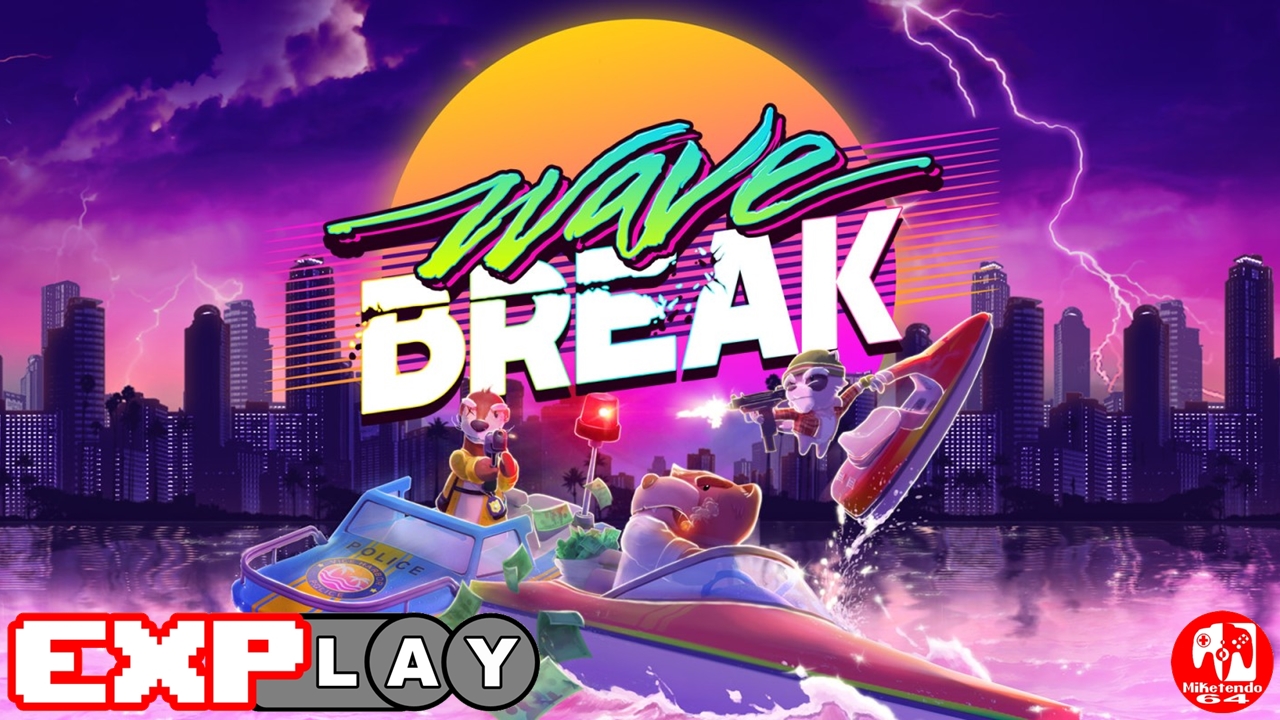 Welcome to EXPlay, (Explain & Play) the review series where we care not for scores but tell it how it is when it comes to every game we get our hands on, whilst also taking the time to include some lengthy gameplay, to give you the reader, the chance to shape your own impressions and views whilst watching and reading. In this installment, we’re covering Wave Break by developer Funktronic Labs.

Have you ever wondered what it would be like if Tony Hawk Pro Skater was instead set with you piloting a speedboat and you were an otter holding a gun? If you answered yes, or if you are just intrigued by the premise, Wave Break may be your answer. In what is dubbed, on their Nintendo.com store page, as the world’s first skateBOATING game. The game has an 80s look and a story that harkens back to Miami Vice, an 80s crime drama set in Miami, Florida, USA.

When you first start up the game you are greeted with a brief tutorial showing you that ZR is your accelerator while in the water, and can provide a short boost of speed while on ramps and rails. ZL is used to reverse your boat. B when held down allows you to jump higher and X attaches you to rails and edges for grinding. Y is the button you will use to flip and A is your grab button. Just like in skateboarding games, holding the button down longer will allow for a longer move to be made, and rotating will add degree rotations and spin to your character allowing you to net more points for doing 180s, 270s, 360s, and more.

After the tutorial you are tasked with completing goals within the levels in a single player campaign. Similar to Tony Hawk Pro Skater, you will need to collect all the letters to spell B-R-E-A-K which are strewn around the map, as well as C-O-M-B-O. To gather the combo letters though, you need to gather them all without breaking your string of moves. Along with having the skateBOATING style gameplay, there’s also a gun you can activate with the R button and L button to lock on and shoot at enemies and opponents while playing.

Throughout each level there are other characters around that will give you hidden tasks which build in a way on top of each other. These may require you to do certain tricks in certain places, across gaps, rails, and ramps. As you progress through the tasks you unlock subsequent levels in the game. Reaching the next levels may prove somewhat difficult as I oftentimes fought against the camera to see my surroundings and landing tricks and combos can be hard.

Along with the story campaign there is a multiplayer aspect to the game, though I could not find anyone playing the game when I tried searching for opponents online. After a few minutes I had given up looking for others playing the game. This is oftentimes an issue with online games, moreso it seems with indie titles and Switch games, to some degree, with a niche audience.

Wave Break has a park creator mode which lets you and your friends create and edit a park of your own to skateBOAT in. The system is fairly easy to understand and creativity in levels is more or less only prohibited by your imagination.

Overall my time with Wave Break was a bit lackluster. The campaign is focused on completing a set number of tasks, the amount of which may seem overwhelming and gating in a way before you can move on to other levels. This can prohibit novice skaters from proceeding through the game, which is a shame since the game begs to be played. Hopefully in the future the developers will make it easier for you to jump into levels without prior need for completion of so many tasks. I am doubtful that the game’s multiplayer will rise to heights as well, especially now that Tony Hawk 1+2 is out on the Switch as close competition for skating enthusiasts.