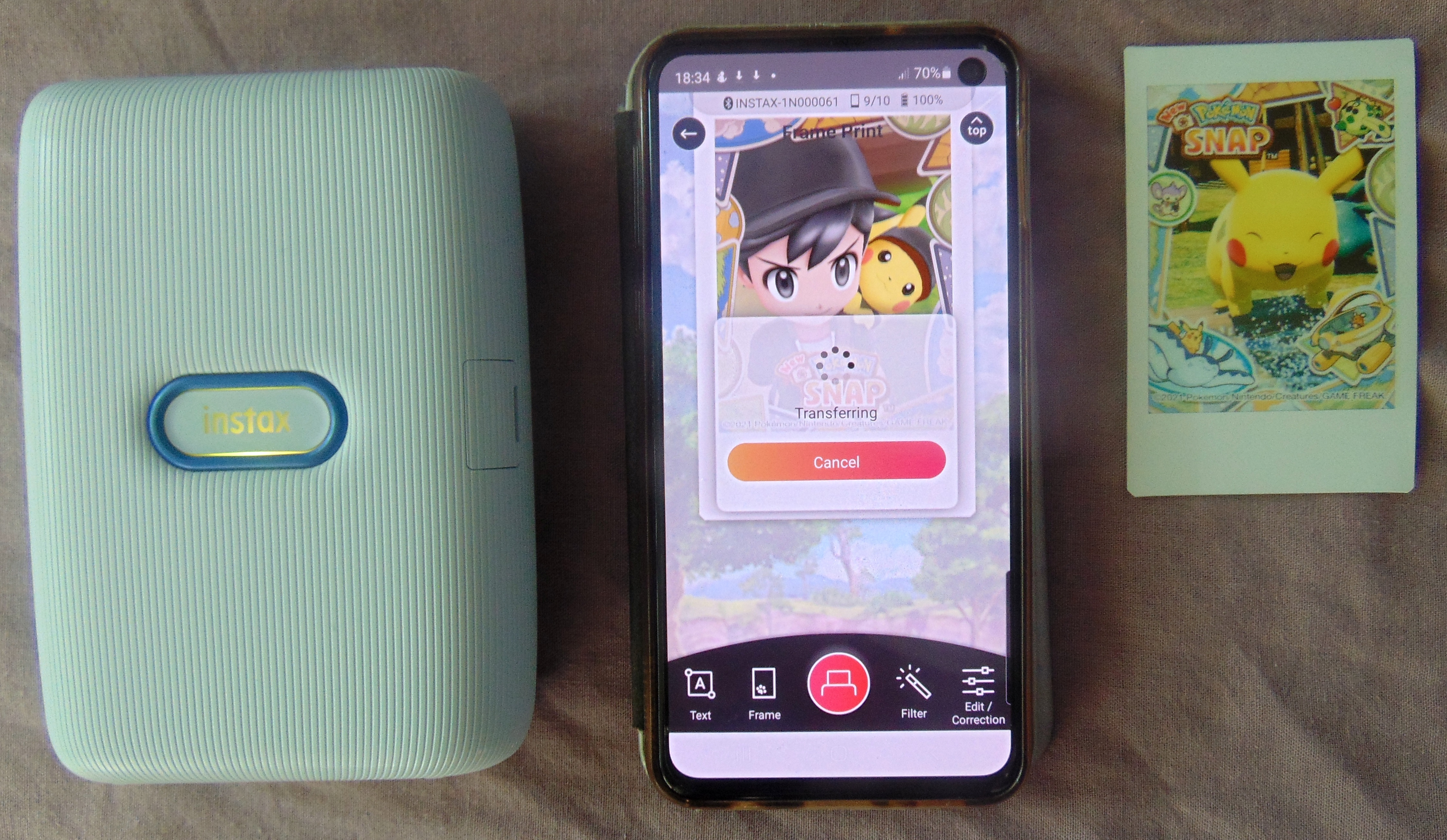 Alongside the release of the new Instax Mini Link SE (Special Edition) printer (you can find our hands-on feature about the printer here), Fujifilm has released a new free smartphone app for Android and iOS called “Instax Mini Link For Nintendo Switch“. Much like the original Mini Link App, this new version allows the user to connect their smart device to an Instax Mini Link printer via Bluetooth. They can then choose and edit photos, as well as add a frame from the reasonably-sized selection available in the app.

When the user is ready, a simple finger swipe across the screen or a press of a button will print out the selected photo. As the photo comes out of the printer, it will be white at first but it will slowly begin to develop like magic (or rather like a Kodak Polaroid photo). The photos are not very large but they can fit relatively snuggly into a purse or wallet thanks to their credit card size.

This feature works seamlessly with a number of smart devices but I have a Motorola G5 that struggles with it and won’t make the connection. The strange thing is that I do have a third-party QR Reader app on my phone that has no trouble connecting to my Switch. I can send my screenshots to my phone this way but not through the Instax Mini Link for Nintendo Switch app. That said, everything else in the app works fine so it is no issue for me to send my screenshots to my phone and then open them up within the app.

As I mentioned before about frames, The new app has all the frames included in the old app as well as three sets of themed frames. The themed frames are based on Animal Crossing, New Pokémon Snap, and Super Mario. Each set has a number of frames to choose from to give your screenshots and photos that extra pizazz.

The frames are not the only things that are Nintendo-themed either. You can also customize the appearance of the Instax Mini Link for Nintendo Switch app as well, with Animal Crossing, New Pokémon Snap, and Super Mario designs. You can also freely alternate between them by selecting “App Design Settings” in the Settings menu (the cog icon in the top right corner).

It will be interesting to see if other themes and frames will be introduced to the app at a later date. Being a Legend of Zelda fan, I would love to see some Zelda-themed frames but the likes of Metroid, Kirby, or Donkey Kong frames would also be very welcomed.

To sum up, the Instax Mini Link for Nintendo Switch app is an essential tool for the Instax Mini Link. After all, you need the app to print out your photos with the Mini Link Printer as you can’t do so without it (unless of course, you use the standard Instax Mini Link app). Though the photos themselves do come out lighter than what is shown on the screen, you can adjust the brightness and contrast of your image in the app, so it will print out closer to the original image.

If you enjoy taking screenshots of your favourite Nintendo games (or even not Nintendo, it can be from any videogame or even any image on your phone), the Instax Mini Link for Nintendo Switch app and the Mini Link Printer is a fun and novel way to taking those digital images and making them physical for you to display any way you like.