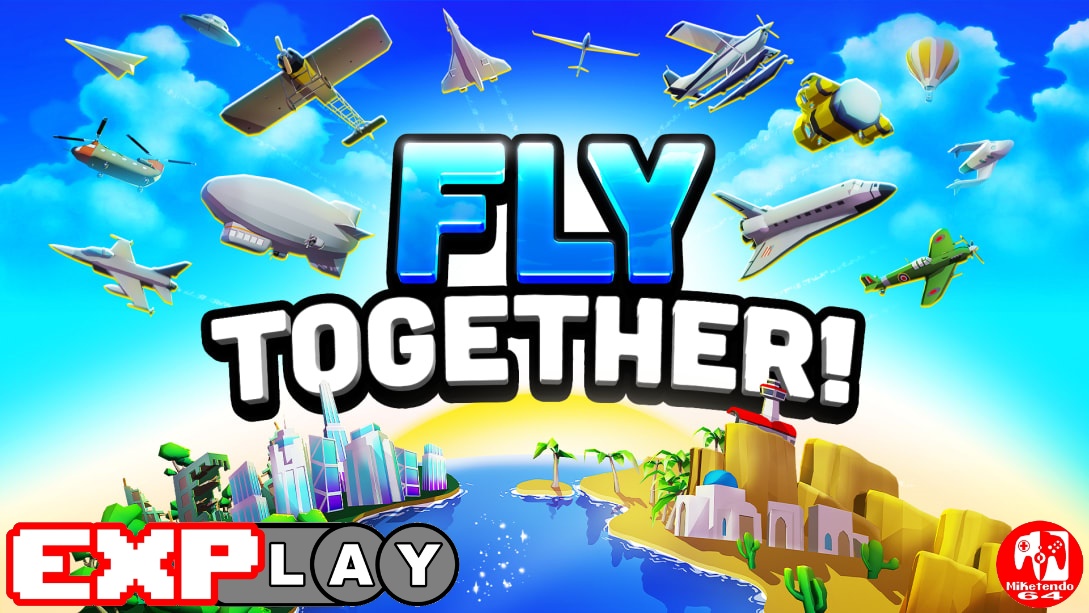 Welcome to EXPlay, (Explain & Play) the review series where we care not for scores but tell it how it is when it comes to every game we get our hands on, whilst also taking the time to include some lengthy gameplay, to give you the reader, the chance to shape your own impressions and views whilst watching and reading. In this instalment, we’re covering Fly TOGETHER by developer Northplay.

Fly TOGETHER!: (The Explanation)

In a world where Danish developers can make train conducting fun and go on to have a successful series starting with Conduct THIS! and continuing with the more recent Conduct TOGETHER!, it’s time for developer Northplay to take the fun off the rails, literally. Swapping locomotives for aeroplanes, the chaotic world of passenger transportation is back and this time, it’s airborne!

Branded as a sequel, Fly TOGETHER! is another brilliant serving of multiplayer chaos that revolves around a simple premise, picking up passengers of varying colours and transporting them to their destination before the clock on each available stage, times out. Of course, there’s more to just flying from A to B, as planes will need to avoid all manner of obstructions and hazards, such as mountains, weather conditions and avoiding the flight path of freight planes.

While things are all very easy in the beginning with players needing only to manage two planes, more can soon become available, ramping up the difficulty spike for a singular player, but others can soon join in thanks to a single Joy-Con. Depending on your performance, the total score of passengers successfully delivered will result in players earning stars, with a total of three obtainable on each stage, with plenty of enviroments and regions unlockable.

Players can also earn coins upon level competition, a well as bonus coins for the number of stars earned. As for the purpose of coins, by levelling up your airport level rank, players can gain access to an airport of their very own, where they can purchase new aeroplanes, store the ones they have already and, provided new blueprints have been obtained via regular gameplay, other new aircraft can be acquired as well.

For the players hoping for more out of Fly TOGETHER! then just the game’s main campaign, there is a multiplayer battle mode where up to 8 players can participate, so as long as you have plenty of Joy-Con to pass around, anyone can jump in and play. Work together and see passengers return to the ground safely, or opt for the crash and burn option. As long as everyone is smiling and laughing, there is no wrong way to play.

However, you choo-choo choose to play, with colourful explosions galore and a vibrant art style that helps set the mood, it is hard not to fall in love with the game’s soundtrack. Even the opening title sequence has a funky track that warrants multiple listening sessions because it’s just that funky and too good to skip unnecessarily. Still, one can’t help but wonder why there are so many airports in such close proximity.

Fly TOGETHER! is everything you could possibly want in a sequel. It kept all of the gameplay elements that worked in the last instalment, the art style has been improved but remains consistent, whilst taking the series in a bold new direction that worked wonderfully. Its crazy action-puzzle gameplay will keep you coming back for more and regardless of whether you’re playing alone or playing nice with others, plenty of fun can be had.

Fly TOGETHER!: (The Gameplay)