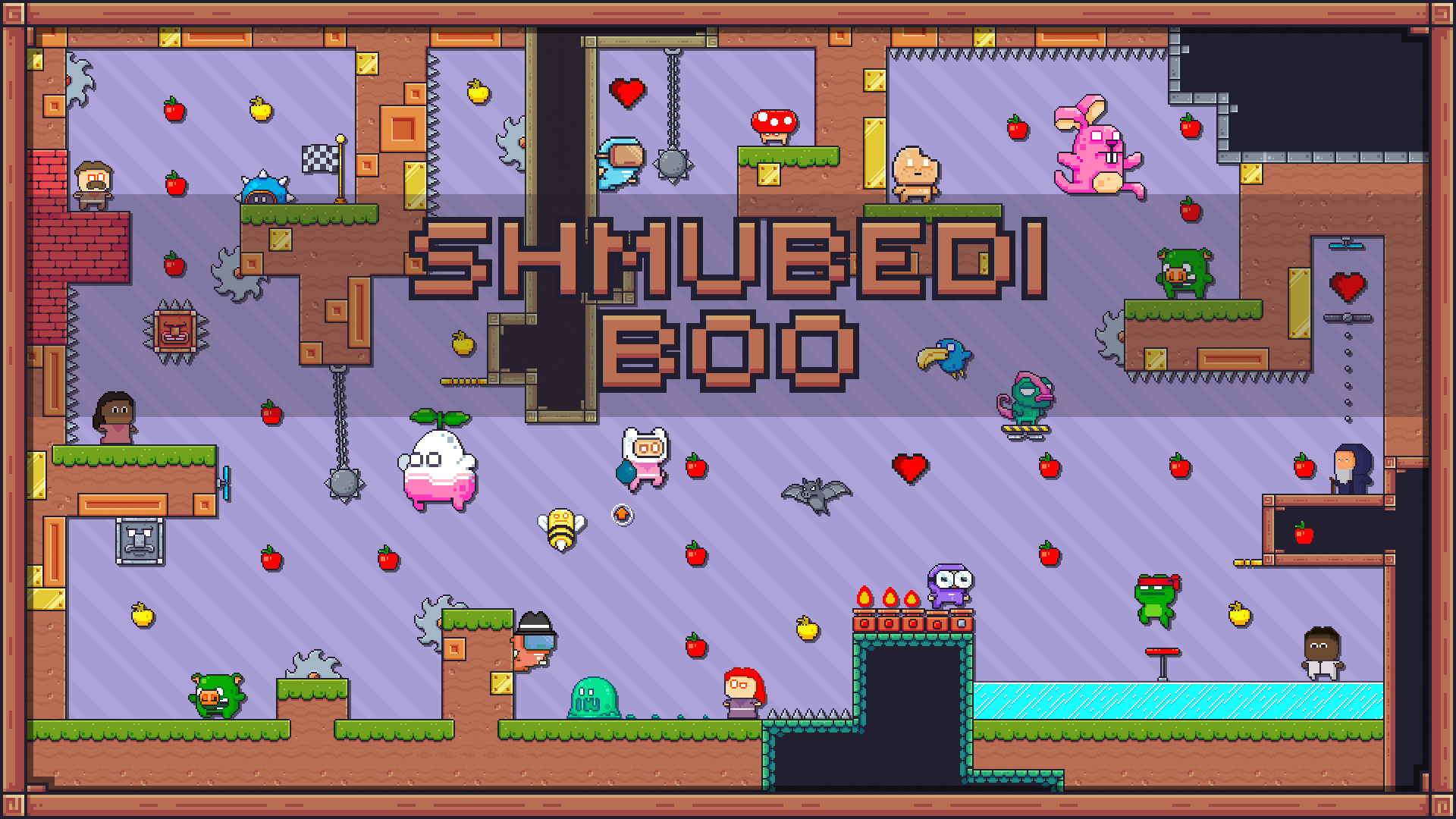 Platformers can provide some of the biggest challenges in gaming. Games such as Super Meat Boy and Super Mario Maker 2have made the hardest of the hardcore scream in agony due to their difficult nature. Shmubedi Boo desires to follow in the same vein as those games.

Developed by Dymtryo Derybas, who developed their first game Attack on Robots earlier this year for the Switch. The indie company is made up of 10 developers, and this is their second game to be released on any platform. Dymtryo Derybas takes inspiration from Super Meat Boy and Celeste, they want to set a new standard for hardcore platformers with their second release. Shmubedi Boo was released on Switch on October 7, 2020.

Shmubedi Boo is not about the story. In fact, there really isn’t much of a story in the game. Here is the crux of it. A rabbit steals all the apples from the land of Shmubedi Boo. The game’s protagonist goes around the land recovering the stolen apples and find the rabbit who stole them.

That’s it. That’s the story. There are no plot twists, and the story isn’t in-depth at all. The story is a side item compared to the platforming and challenging obstacles. Shmubedi Boo will not keep you engaged with an engrossing story.

The gameplay in Shmubedi Boo is simple. Your character runs and jumps through trap-filled levels. You can purchase upgrades for your character like more lives so that you can sustain more hits. There isn’t a lot in regards to items but what little there is can be obtained by selling apples you have required. The more apples you collect, the better equipment you can buy.

Your character can also cling onto walls. This will help out if you want to wait to avoid hazards like a nasty saw or enemy. You can use bombs to defeat enemies and blow up breakable walls. They are a finite resource so be sure to stock up by purchasing them at the shop. Bombs add a little variety to the gameplay to mix things up a bit so it isn’t just jumping from platform to platform all the time.

The Shmubedi Boo features 120 single-screen levels to scream through, I mean to get through. There is a multiplayer mode if you want your friends to join in on the agony. I haven’t tried out the multiplayer mode, but people who have say it works, so I will take their word on it.

There is an achievement area to take a look at how well you’ve done, how many times you’ve died, and your high scores. There is an options section to fix the music, sounds, and language to your preference. There is also a hidden character the Duck to unlock. If you have trouble with the controls, there is a control section for the player to learn how to figure out the control mapping in the game. However, there isn’t any option to fix the floaty physics of the controls.

Shmubedi Boo’s audio is simple but memorable. The development team has a good ear for music and sound effects. The energetic soundtrack filling every stage and bright hops, blobs, and ouch sounds when your character dies (you will do that a lot), are funny and fit the game. The music is meant to get your adrenaline pumping for action-packed platforming. It works in doing that. You feel like a daredevil ready to take on any challenge.

The sound effects are a unique mixture of traditional performing sounds but add a unique flair to make the sounds stand out. When your feet hit the floor, it makes a toy-like sound. Like a child acting like their action figure is jumping onto a hardwood floor.

The music and sound effects do their job. They make the player feel like a superhero trying to save the day from the evil rabbit who stole the apples. I could listen to a few songs from the soundtrack a lot. That is how good the audio is in Shmubedi Boo.

The visuals in Shmubedi Boo have a bright feel similar to Super Meat Boy mixed with New Super Mario Bros. This is a single screen platformer, so the size of each room will not wow anyone. What will impress the player is the small details like feathering flying from flying enemies, the saws cutting through the ceiling or floor, and the texturing is simple but effective.

The performance is solid at 30FPS. There are no noticeable dips. Even when there are lots of traps and enemies on the screen. The 720p resolution is solid with no dips in the resolution. Shmubedi Boo has been optimized greatly for the Nintendo Switch. Especially in portable mode.

Here is where the game falls apart. What makes a great platformer is the controls. Especially when the platforming demands such precision. Shmubedi Boo’s floaty controls force the player to fight the controls and the traps in the levels, instead of the player trying to figure out how to properly navigate through well-placed traps and jumps. That isn’t a good design.

Great platformers like Donkey Kong Country Tropical Freeze give the player great controls, while it’s up to the player’s timing and skills to make it through each level. Super Mario Bros perfected this formula, and it should be the blueprint for each platformer made. Shmubedi Boo doesn’t follow that formula.

Shmubedi Boo is unforgiving. The game will punish players at every turn. When you run out of lives, you will have to spin a wheel, if you don’t get a cherry, you will have to start over at the last checkpoint. For a game that demands so much of the player, it doesn’t give you as much help as it should. You will throw your Switch or controller. You may set your Switch on fire to erase the pain this game will inflict upon you.

Shmubedi Boo had the potential to be a great platformer in the vein of Hollowknight, Celeste, or Ori, but the floaty controls sink the experience. There are good things about Shmubedi Boo, like the music, (which is limited, but effective), some of the levels are pitch-perfect when it comes to platforming filed with clever traps, and excellent enemy placement. However, that isn’t enough to overcome the atrocious controls and demanding nature of the game.

Shmubedi Boo could’ve been a great new indie platformer praised for its challenging levels, trippy music, and unique sound effects. Alas, Shmubedi Boo is too concerned with trying to out brutal games like Super Meat Boy and Celeste. Unlike those masterpieces, Shmubedi Boo doesn’t reach that level due to it’s trying to hard to be the hardest game. Shmubedi Boo forgets that hard hames that are fun make you want to drive through until you get it. Shmubedi Boo makes me want to forget all the time I put into it.

Shmubedi Boo is a pleasant enough platformer that is unfortunately undone by poor controls and unforgiving nature. This isn’t a game you’ll want to remember any time soon.