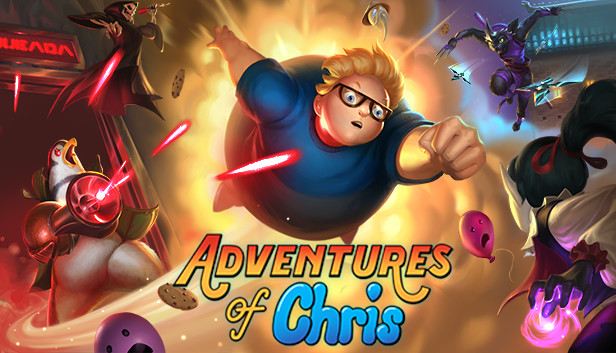 Adventures of Chris has been in development for quite some time. The game was originally designed as a pixel-art title inspired by a game with the same name. It was then later changed to accommodate a hand-drawn visual approach instead, seeking inspiration from the likes of 90s Saturday-morning cartoons. Adventures of Chris finally saw release on October 8th, 2020 for the Nintendo Switch.

You start off playing as the titular protagonist Chris, who on his way home gets teleported by a mysterious portal to Transylvania, and stumbles upon a treacherous castle. Here is where Chris meets the main villain, Count Junior, as well as his ghostly partner. After a series of unfortunate events, Chris is cursed and turned into a balloon and is held captive in a room, alongside other kids who have been turned into inanimate objects, reminiscent of infant toys.

We’re then introduced to the rest of the villains, each of which keeps one of the kids as a gift from Junior. After an explosion, Chris is released from captivity and floats into the sky, where he arrives at the main hub area, the Kingdom of Lost Balloons. Some character conversations and a prophecy told later, the players’ main objective is to travel around the globe, locate every captive kid, and bring them back home.

There is more to the plot once you save every kid, but that delves into the late game, therefore it’s spoiler territory, which I shall avoid for the sake of this review.

Inspired by 90s Saturday-morning cartoons, Adventures of Chris is a 2D side-scrolling platformer with some Metroidvania-like elements. While the objective is as simple as going from left to right while platforming and defeating enemies, there’s some variety to its gameplay with fetch quests, as well as diverging paths that reward players with collectibles and secret abilities.

You have your attack move, a standard jump, limited magic abilities that use a special gauge; the standards of any modern platformer. What sets this title aside from all else, however, is Chris’s unique ability to inflate and deflate at any given time; though of course, this is limited to the slots that restrict you from performing this move countless times.

Once inflated, you go upward, and once you released, you fall back down. This mechanic creates situations where you can reach high areas, avoid deadly traps on the ground, and much more. It’s a well-implemented mechanic and levels make good use of this ability, on top of all other abilities you gradually unlock by advancing in the campaign.

There is a good variety in gameplay to keep every level feeling distinct from one another. One stage, for example, has you controlling a missile-firing submarine, while in another, Chris is attached to a bird-like enemy and you fly through the sky.

In terms of length, beating the main campaign of Adventures of Chris should take you roughly about six hours, with 100% completion being another hour or so. It’s a pretty linear experience, with only a handful of collectibles. Cookies serve as the “coin” of this game; with it, you can purchase upgrades like damage reduction and more health.

In levels, you can find country flags (corresponding to said level location) and books, which once returned to the library, fill out some of the lore behind the world and villains. There are more than fifteen upgrades to Chris, which you unlock via story progression or finding balloon masters.

The soundtrack to Adventures of Chris is a definite highlight with its many tracks. The main theme and world hub theme, for example, I would say are quite memorable. They are enjoyable to listen to and atmospheric to each level. Sound effects are good too; the standout being the various magical attacks, which sound impactful and powerful.

Though originally Adventures of Chris was designed with pixel-art in mind, throughout development the developers changed visuals for a more hand-drawn cartoon approach. Due to this change, this title looks much more visually appealing and stands out from the crowd. There is this “flash”-Esque animation throughout, which makes some movement look somewhat rough, but aside from that, it does have a lovely artistic design.

In regards to performance, I must admit that I didn’t see any hiccups in frame-rate or resolution drops. My experience with Adventures of Chris was indeed a smooth experience from start to finish. This goes for both Docked Mode and Handheld Mode, which may come as a surprise to some. However, the Switch is more than capable of running this game without a hitch.

Adventures of Chris is a great game… with one big issue that tampered with my overall experience. That issue being the unbalance and unfairness in enemies and bosses. In the case of its enemies, many fire projectiles, far too many the majority of the time, and it makes it extremely annoying to avoid getting hit. Ninjas seamlessly throwing an infinite amount of shurikens, penguins with laser guns that don’t stop firing. It’s a constant issue that had me dying a lot more than what I’d like.

Even with max health, there were on many occasions moments where I’d just barely make it to the next room. What’s worse, however, are the bosses. Their attack pattern, health points, and overall movement are far superior to Chris’. And while I enjoy a good challenge, some of these bosses seem to be impossible. In fact, I’d say around half of these would’ve been impossible to beat, unless I’d found a way to cheese the fight or get straight-up lucky.

Still, this wasn’t a huge issue… until I got to the final boss. After hours of attempting this fight, I had to quit, or else I would’ve never gotten this review out. The second phase of this boss has you floating and deflating in the air with no platform insight to recover balloon slots. Additionally, the boss moves so frequently it was impossible to damage him normally, and if you used magic, you’d run out of it after a few seconds.

There’s also a ceiling that is ablaze that will do damages to you, the boss has a ridiculously high health bar, and there is not enough space to move around. If you lose this fight and want to return to the world hub to buy upgrades, tough luck since you’re soft-locked to this fight. I like difficulty in my games, but there’s a point when it’s no longer a challenge, it’s simply unfair and unbalanced.

Adventures of Chris offers a light-hearted story about how anyone can wear the mask, packed with some solid gameplay mechanics, soundtrack, and visuals. Frustrating enemies and bosses aside, this title is worth checking out.