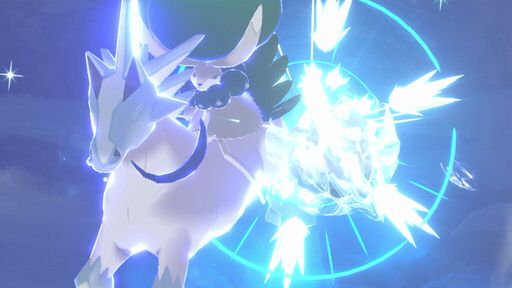 Now that The Crown Tundra is out in the wild and ready for Pokémon Sword and Pokémon Shield Expansion Pass holders to enjoy and explore, a couple more details have been shared on a few more new Pokémon players can expect to encounter. So join us as we welcome back “Who’s That Pokémon?” and this time, we’re tackling the High King Pokémon, Ice Rider Calyrex:

Description:Glastrier’s powers are heightened by Calyrex’s psychic energy. The cold Glastrier emits can reach three hundred degrees below zero. It also has the endurance to run for seven days and nights on end, no matter how rough the road, by instantly freezing and smashing through any obstacles in its path.

Moreover, Glastrier’s intense cold has brought out the full potential of Calyrex’s psychic powers as well. This lets Calyrex manifest its powers over a radius of more than 50 kilometres.

Calyrex can use its psychic energy to condense the cold emitted by Glastrier into gigantic icicles. It can fire these icicles at opponents like arrows or wield them like lances for charging attacks. These psychically strengthened icicle lances appear powerful enough to blow holes in rocky mountains and pass through them completely.

Signature Move (Glacial Lance): In this powerful Ice-type physical move, the Pokémon attacks by hurling a blizzard-cloaked icicle lance at opposing Pokémon. In Double Battles, this move can damage two opposing Pokémon on the battlefield.

Ability (As One): Ice Rider Calyrex’s Ability, As One, is a new Ability introduced with the Pokémon Sword Expansion Pass and Pokémon Shield Expansion Pass. This Ability combines the effects of both Calyrex’s Unnerve Ability and Glastrier’s Chilling Neigh Ability.