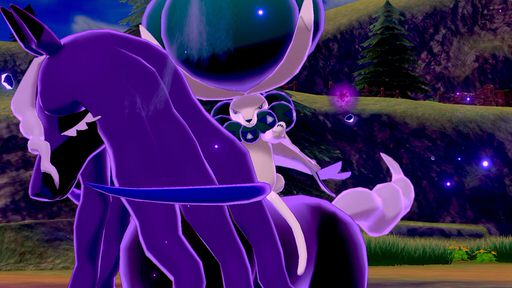 Now that The Crown Tundra is out in the wild and ready for Pokémon Sword and Pokémon Shield Expansion Pass holders to enjoy and explore, a couple more details have been shared on a few more new Pokémon players can expect to encounter. So join us as we welcome back “Who’s That Pokémon?” and this time, we’re tackling the High King Pokémon, Shadow Rider Calyrex:

Description: Spectrier’s skills have been heightened by Calyrex’s psychic energy. It is swift enough to run thousands of kilometres in a single day, and its spectral powers have gained strength.

Moreover, Spectrier’s unearthly might has unlocked the full potential of Calyrex’s psychic power. This lets Calyrex see all events from past to future. The regal Pokémon can manifest this power over a radius of more than 50 kilometres.

Calyrex can pour its psychic power into Spectrier in order to create countless small will-o’-the-wisps and rain them down on opponents like a meteor shower. It appears anything touched by one of these wisps can have its life-force stolen while also being scorched with burning heat. Moreover, Calyrex can condense Spectrier’s spectral aura into a large, black, mist-like mass. This mass is imbued with the power to absorb life-force, and it sucks in the souls of nearby living things like a black hole.

Signature Move (Astral Barrage): In this powerful Ghost-type special move, the user attacks by sending a frightful amount of small ghosts at opposing Pokémon. In Double Battles, this move can damage two opposing Pokémon on the battlefield.

Ability (As One): Shadow Rider Calyrex’s Ability, As One, is a new Ability introduced with the Pokémon Sword Expansion Pass and Pokémon Shield Expansion Pass. This Ability combines the effects of both Calyrex’s Unnerve Ability and Spectrier’s Grim Neigh Ability.