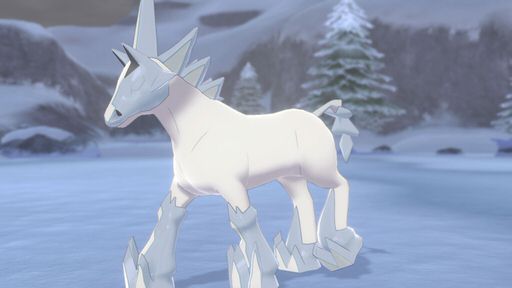 Now that The Crown Tundra is out in the wild and ready for Pokémon Sword and Pokémon Shield Expansion Pass holders to enjoy and explore, a couple more details have been shared on a few more new Pokémon players can expect to encounter. So join us as we welcome back “Who’s That Pokémon?” and this time, we’re tackling the Wild Horse Pokémon, Glastrier:

Description: This Pokémon generates intense cold air within its body and emits that cold from its nose and hooves. This cold air covers Glastrier’s face and legs in unyielding ice, giving its attacks extraordinary destructive power. Nimble movements are not Glastrier’s strong suit. But it can use the cold exuded from its hooves to freeze the ground, letting it shoot off sliding across the ice to close distances in a flash during battle. A ruffian ploughing through snowy lands Glastrier Glastrier’s might and stamina let it charge through the snowiest of lands and the worst of roads on its thick, burly legs. It’s also belligerent and proud and takes anything it wants by force. It apparently can’t help challenging any strong opponent it sees to battle.

Ability (Chiling Neigh): Glastrier’s Ability, Chilling Neigh, is a new Ability introduced with the Pokémon Sword Expansion Pass and Pokémon Shield Expansion Pass. When a Pokémon with this Ability knocks out a target, its Attack stat is boosted.