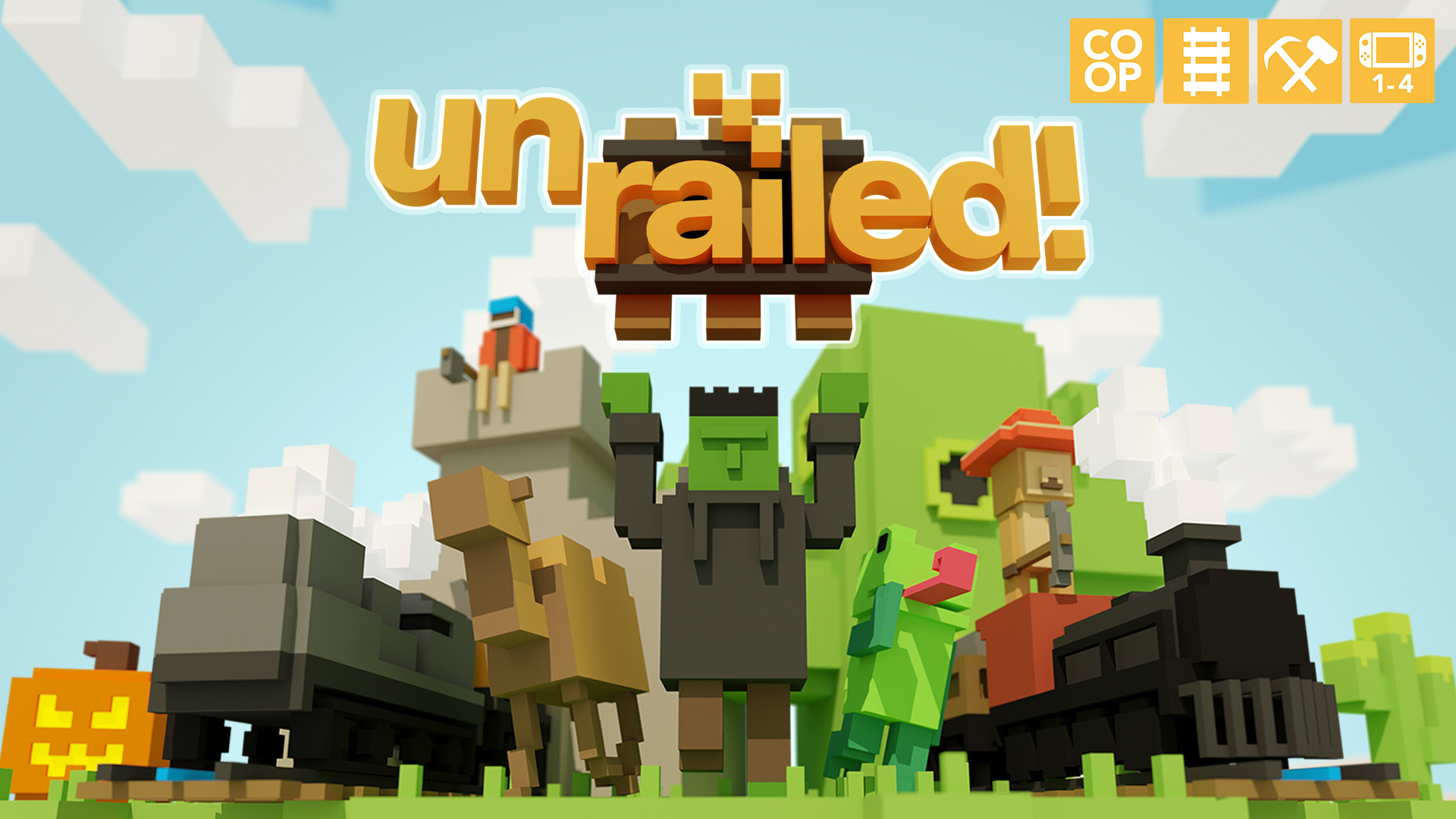 Unrailed! is currently available on Windows, MacOS, Linux, PS4 and the Nintendo Switch, and coming soon to the Xbox One. The game has won awards for Best Innovation, Emerging Talent, Audience Choice, and Tommi. First seen in Summer of 2018, the game trailer showed off the unique art style and deceivingly simple gameplay. Now two years later the game is finally out, along with a Switch demo, and ready for you and up to three other friends to lay down some rails.

Unrailed! doesn’t have a story mode. It’s you and your AI partner, or you and up to 3 friends locally or online working together or competitively across procedurally generated maps where each encounter is different from the last. Your main objective is to move from left to right around mountains, through forests, across rivers and open water, and mining or blasting your way through rocks. Your destination is the local station at the other end of the map which leads to the next area and your path to upgrading your train and its subsequent cars.

In Unrailed!, you play alongside an AI teammate, or with up to 3 other humans either in local single screen or online cooperative or competitive play in a variety of game modes. Your main objective is to get your train from station A to station B at the far right of the map. In your way are forests, rocks to mine, bodies of water to cross, and mountains to circumnavigate. You can pick up an axe to chop down forests and turn the wood into planks for creating new rails or bridge pieces to help you cross over water.

To mine the rocks one of your teammates needs to use the pickaxe and begin walking towards rocks to mine iron. The wood and iron can be combined to form completed rails that are made by stacking piles of wood and iron in a cart, which then get turned into rails that you can pick up and place ahead of the train. Iron can also be used to turn into dynamite which takes a while to make in the specially marked train car but has an explosive impact on clearing forests and rocks out of your pathway.

Along with the axe and pickaxe you also have a water bucket which is used to cool off your engine when it gets hot. To gather water, you just need to stand by one of the waterways and fill up your bucket and then head over to your traincar to stop it from overheating, or to douse the train cars that are on fire.

At the end of each map, when you successfully reach your destination station, you are thrown back to a screen where you and your teammates can spend golden bolts. You receive golden bolts by meeting certain in level achievements or by finding one hidden bolt within the map. Upgrades to your various train carts can increase the speed and efficiency of your load capacity and building rates. There’s also my favorite, the ghost cart, which allows you to pass through up to three carts, which can be helpful when navigating through small pathways or along trickier routes.

Unrailed! has three main modes: endless, quickplay, and versus. Each game mode can be played with up to four players, or an AI partner. I did find that the game worked well enough with three players, but levels seemed more manageable with four players each working on their own tasks. While playing you can emote with up to sixteen various icons, like asking teammates for wood, iron, building rails, watering the train cars, thumbs up, heart eyes, and more. I actually found that emoting worked well enough to communicate, though there were a few online matches with random people that I was in where one or two players were obnoxious and didn’t seem to know how to play or care to win.

Along with emoting and train car upgrades there are also day/night cycles, weather patterns, and multiple biome types. There are multiple character skins you can also unlock as your progress from people of different colors and styles, to animals, like penguins, lions, and frogs.

Versus mode, which I played the least amount of, is a competitive race to the end in a 2v2 match up. In this mode you can toss explosives towards your opponents in hopes to slow them down and blow them up, which drops them down via a balloon from the sky above. Versus mode is fun, though I found the cooperative mode to be more interesting to me.

The music and sound effects in Unrailed! are low-fi blips and boops that match the voxel design of the game. Items like the axe and pickaxe have tree cutting and rock breaking sound effects respectfully, to help you hear the impact you are making as you cut through the forest and mine through the boulders.

The use of dynamite is arguably the best sound used in the game as it’s devastation and blast echo. The game has a low key soundtrack to boot and is mellow, despite the stress that can come when navigating through the maps and placing rails down while only having a few spots to choose from and the train is barrelling towards you.

The voxel top-down view style of Unrailed! gives it a unique and clean art style that works well with the cartoon style of the premises of the game. The characters all swing with huge gestures as they chop trees and mine rocks. There’s a slight blur as you dash along the map trying to outrun the train or sneak past a teammate. When your train cars overheat there are small flames that slowly build as the fire engulfs the locomotive.

I played Unrailed! nearly all docked to my tv and online against random people. I only had one connection issue occur, which happened when those two teammates I mentioned earlier who didn’t know how to play decided to leave the game. All in all the performance of Unrailed is great, and the visuals easy to see. I did have a bit of a problem seeing some of the finer details in handheld mode, but all in all the game performed well. There is some side edge blurring that happens in both desktop and handheld, which seems to give the game a bit more of a depth of field look and not due to performance issues.

Couch and online co-op or competitive games that really grip me are sometimes hard to find. Unrailed!, however, was one game that I enjoyed and have gone back to many many times during and after my review was written. I loved the fast-paced and frenetic gameplay and the need to work together online through emoting orders and satisfaction or anger is a great addition.

Laying down rails through procedurally generated landscapes with friends or random strangers is a fun way to spend your afternoon. Unrailed is one of the best cooperative and competitive games out for the Switch. The gameplay premise is simple and unique, but the difficulty and stress level is akin to games like Overcooked. If you have some friends to play with locally or online, I would recommend grabbing this game for Switch.