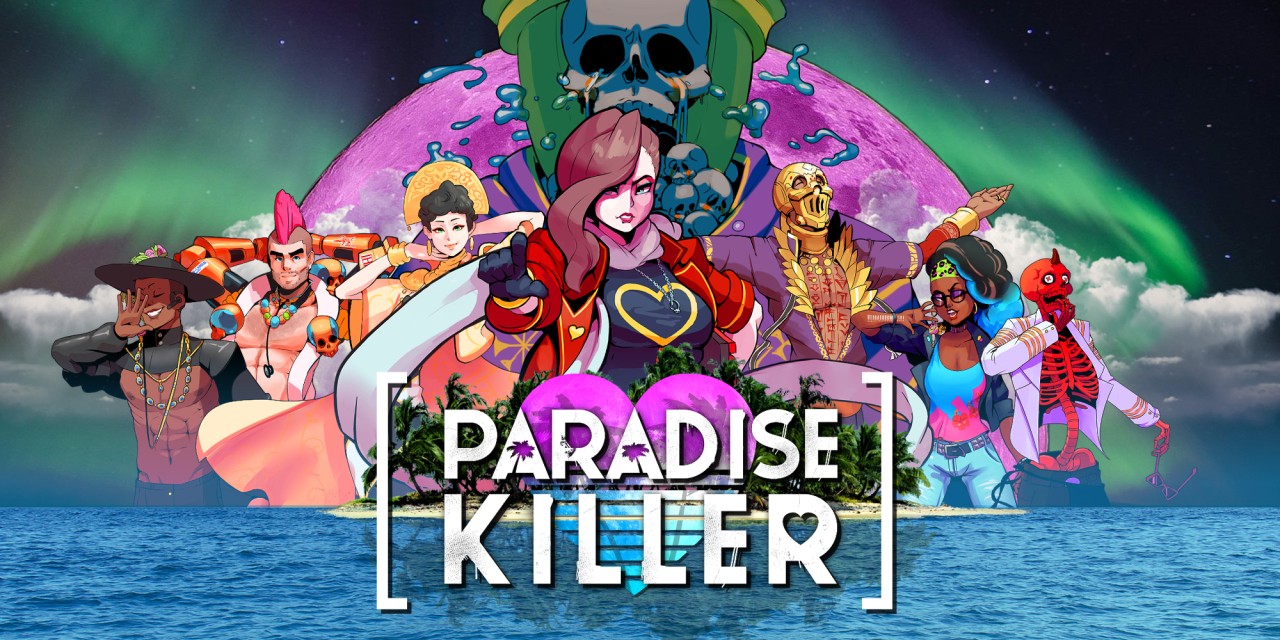 Paradise Killer is a vibrant 80’s synthwave inspired, murder mystery-solving, deep Lo-Fi exploration into death. This title was developed by indie developer Kaizen Game Works and Published by Fellow Traveler. The developers believe in player freedom and that is evident in Paradise Killer’s vast, open world. You have the freedom to choose and accuse and follow this story in your own way.

How do you envision the afterlife? Apparently, Kaizen Game works and Fellow Traveller believes that the underworld and afterlife is a mix of 80’s Miami Vice inspired land, smooth synth-like jazz music, and mystery! The game first was released back in April in Melbourne Australia. Now, Paradise Killer is out on Nintendo Switch, PC and Mac.

Is On the eve of the islands next rebirth, known as Perfect 25, the council are all murdered. You are the “Investigation Freak” Lady Love Dies and now you must solve the mystery of the Paradise Killer.

The world of Paradise is full of hints and clues and flamboyant, gregarious characters to investigate. You must gather as much evidence and use your own actual wits to figure out the mystery. Fact and truth are not the same, however. As you dig and investigate, you learn more about how you investigate than just the mystery itself.

The game begins with a welcome, explaining that this game is unique in its layout and that you can go about your investigation however you see fit. Thus, really amplifying its replayability. In this day and age of copy-paste structures in video games, especially open-world games, this is a breath of fresh, synthwave air. At first, honestly, I was not as into this title, but the more I played and learned and bought into the world, the more I wanted to start over and try different things.

The world is run by The Syndicate, who created the first Paradise Island, to worship their dead alien gods. This worship of demonic gods brought unsurprisingly brought about corruption. This brings the death of the island, and a new resurrection. It is an awfully long, cycle.

You are Lady Love Dies, the Syndicate’s lead investigator. Born at the Longest Tower in Britain in 1000 A.D. She has endangered Paradise and is sentenced to eternal exile. She was forced to watch as the cycles continue: The island gets closer to perfection, the demons ruin it, cycle repeats. Before Perfect 25, the final cycle, PARADISE WAS KILLED.

This story plays out in two parts. Dialogue heavy, almost visual novel-esque and open-world exploration where you will solve puzzles and investigate the large world of Paradise. Honestly, I would like to delve more into the story, but with its unique approach to investigation, I think I’ll leave it up to you to figure it out!

This game plays out like one of those weird independent movie college filmmakers would make that almost doesn’t make any sense, and that’s the point. You must accept the setting and style and just make the best of what is before you. Do not think too hard about anything in this game, just enjoy the ride! Even the names of the characters are remarkably interesting, such as Lady Love Dies, Doctor Doom Jazz, Crimson Acid, Henry Division, Yuri Night, etc. If you are thinking of names for your next 80’s style synthwave band, use these names!

Paradise Killer is a mish-mosh of first-person, open world exploration, puzzle-solving, and text-based visual novel. Even the characters that you encounter throughout the world are rendered in beautifully bright 2D. You collect various things, mostly Blood Crystals that you use as currency at vending machines and elsewhere. You are also aided by Starlight, a talking supercomputer laptop that helps you identify suspects, find points throughout the world and gives you advice on your next move.

One annoying, yet understandable feature is that you must find save points to save your game. You need to set aside some time for this title so that you have enough time to understand the plot as well as find the next save point. In contrast to that point, every bit of dialogue between Lady Love Dies and the cast of Paradise Killer is saved for you to go back and reread what you have experienced. This is of great importance to me because I tend to forget things, especially in dialogue-heavy murder mystery games like this one.

Each dialogue you have with each character will ultimately have an emotion tied to their response. It is up to you to decide how you approach your relationships. As stated earlier, freedom to play how you want to play is the name of the game in Paradise Killer. They truly made a “choose your own adventure” book style murder mystery game!

As you unlock different save points, you can spend Blood Crystals to turn them into fast travel spots. This also unlocks skins for Starlight. My favorite is the Shiba Inu, The best dog. The controls are quite simple, albeit different. Using the bumpers to crouch or jump took some getting used to and the normal walk is painfully slow. Although there is no sense of urgency in this game, so your slow walk is not a game-breaker.

Paradise Killer showcases beauty in simplicity when it comes to gameplay and controls. This title also rewards curiosity and forces you to figure most of this game out on your own, which is not a bad thing at all in a game that is all about freedom, murder, and sweet synthwave soundtracks!

This game is full of secrets and unlockables. You just have to find them! Once again, the freedom the developers wanted to give the players allows for a large, lengthy playthrough. Skins for you starlight are just the beginning. You choose what evidence you think is important, and you choose what character you think is the prime suspect.

The land of Paradise is vast and while it is a single-player story, it has plenty of secrets you need to investigate and unlock! While there is currently no DLC or multiplayer,  Kaizen Gameworks states that: “Games should eschew ‘storytelling’ and embrace ‘story interacting’” which means that you are part of the story entirely, which is some of the primary features of this title.

Even if it sounds redundant and cliché, your decisions do matter in how this game plays out! From learning a dead alien language to poking holes in alibis, you can do anything you want in this game and have a pleasant experience.

As a musician, I deeply appreciate the effort put into the soundtrack for Paradise Killer. You can skip any track you want to fit the mood of what you’re doing and this soundtrack makes Paradise Killer feel like an 80’s sci-fi mystery thriller that you are creating as the game plays out.

The audio in the game has no dialogue except a few blurbs here and there. The world sounds are well done and balanced and really there’s not a lot to complain about with the sound and audio for this game. Just jam out that soundtrack!

The graphics and visuals of Paradise Killer are all smooth and polished. On the Switch, they run very well, full frames, no hiccups. The most interesting thing about the graphics to me are the characters. In a fully immersive 3D world, the characters you encounter are 2D Rendered cut-outs.

They are brightly drawn and posed in various, ambiguous poses, especially Doctor Doom Jazz, who looks like a reject from JoJo’s Bizarre Adventure. The art in this game is almost as if you’re playing out of a comic book or an 80’s sci fi anime. The art and visuals are very pleasing to the eye and the performance is very well balanced in both docked and handheld mode!

In Paradise Killer, freedom is the name of the game, ironically. You are trapped in exile, yet you have the freedom to explore how you, the player, see fit. You can investigate and accuse anyone you choose, and you can find out all the secrets of every building on the island. How you play determines how the story will play out. While this is a game feature that is often beat to death in the ground, I believe the developers of Paradise Killer may have figured out a way to make that feature interesting and different.

The world is bright, interesting, and honestly fun to explore. The music is amazingly composed and makes you feel like you should be on an episode of Miami Vice or any other 80’s crime drama. The writing and storytelling are very well done and intelligent. The naming is just funny at times, but I dig the risk of being unique with the weird names. I also appreciate the attention to detail by hiding so many secrets and facts about the world you are exploring to help you solve the mystery on the island.

For a single-player, open-world mystery game, Paradise Killer proved to be a bit more interesting than I initially thought. This game feels like you are playing through a weird, college independent film. While I am not the biggest fan of this style of mystery game, I felt the delivery and overall experience is worth recommending to anyone looking for a weird, interesting game!