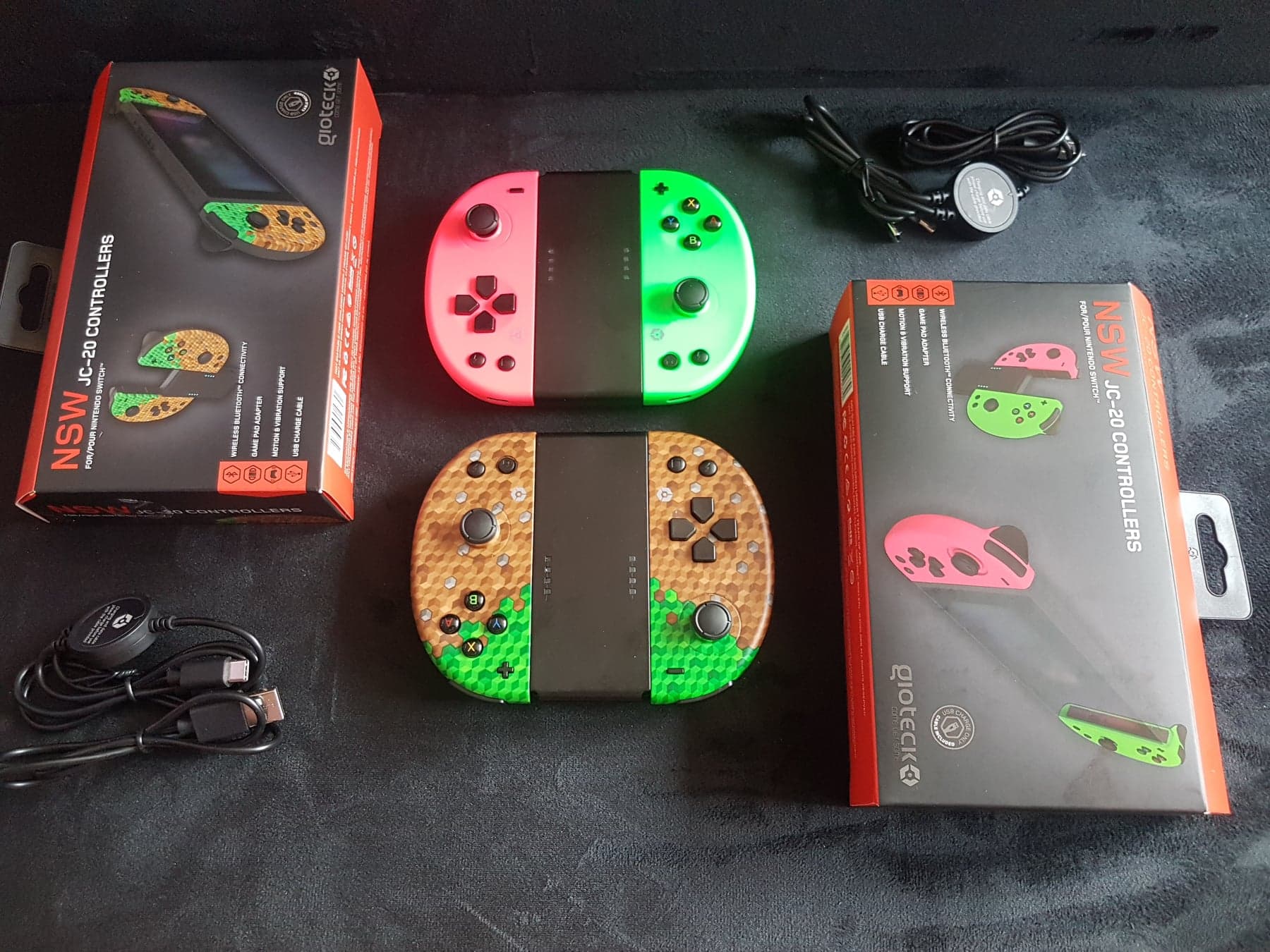 Since the launch of the Nintendo Switch, there has been no shortage of third-party controllers and accessories. In fact, there’s so many now that it can be hard to keep up with them all.

New ranges and product are announced every month and thanks to Gioteck, I’ve recently had the chance to try out their latest range and I’ve got to say, I’m rather impressed. Although I understand the appeal of the official Joy-Con and am in awe of just what exactly they can do, I would be lying if I didn’t admit to having some issues with them.

Being able to share Joy-Con with a friend and play with one apiece is a great idea and it’s something that works well, but even though I don’t have the largest hands in the world, both the controller and its buttons, feel too small for my liking.

I would have preferred something bigger and that’s precisely why most of the time I prefer to use the Nintendo Switch Pro Controller, but thanks to Gioteck, my Pro Controller hasn’t seen as much use as it normally does.

As part of a care package full of products we’ll be covering, among them were two sets of Gioteck’s JC-20 Controllers. The first is the Pink/Green set, similar to those of the neon green and neon pink Joy-Con released by Nintendo. The second set is the one with the Cubes and Pastel edition, which is a design inspired by Minecraft.

All controllers in this set are slightly larger than official Joy-Con, but are wider and feature a curved edge that is friendly for your hands, but you can still dock them to your Nintendo Switch, should you wish to enjoy some handheld gameplay.

They lack an IR Sensor, but their motion and vibration support are on a level you would hope for, allowing them to be useful controllers for games such as Fitness Boxing and 1-2-Switch. (Yes, that’s right. For the full purposes of reviewing these particular products, I made brought both those games out of retirement.)

Now, before proceeding any further, let’s talk about what is in the box and list the features that these controllers possess:

As far as USB charge cables go, the one packaged as part of the JC-20 Controllers is a handy one. Because you can’t charge them via your Switch when docked as they don’t draw power from it, the cable has a split end, allowing you to charge both controllers in a set at one time.

So, while the split end of the cable connects to your controllers, the other side can be inserted into a USB plug adapter, or plugged into the actual Switch dock itself. Charging takes 2 hours, but players can get 10-12 hours of playtime out of a fully charged controller.

Connecting to your Switch:

When pairing the new controllers to your Switch, some issues can occur, especially if a new firmware update is out and consumers will need to update their Gioteck controllers, or the controllers require charging. As for the actual steps to connect, we’ll be sharing those here:

Not only do the JC-20 Controllers feature a HD Rumble well enough to allow players to play the likes of 1-2-Switch and Super Mario Party with precision, but they are a pretty impressive piece of kit.

They feel pretty durable, they have all the buttons you need, including capture, home, a d-pad and even turbo buttons. I was put off originally by the fact that the analog sticks are smaller than those on official Joy-Con, and even the buttons are smaller, but because of the design of the actually controller, they feel friendly to use, even whilst playing games such as Hyrule Warriors: Definitive Edition.

I hacked and slash for hours, both in handheld mode with the controllers attached to my Switch and in TV mode, attaching the controllers with the game pad adapter the products come with. Not once did I feel the urge to put them down and swap them with my Pro Controller.

What’s more, although they can heat up during longer use due to the battery, after an entire month of using them, I have yet to sustain any Joy-Con drift and it is just so refreshing not having to experience that as I do on a daily basis with my official Joy-Con.

While no third-party controller can every put the real deal to shame, Gioteck’s JC-20 Controllers are a pleasure to play with. I thought the smaller analog stick and buttons would put me off, instead, they spurred me on. If you’re looking for a cheap alternative to Nintendo’s official Joy-Con, why not give these bad boys a go?

*Products were provided by Gioteck for the purposes of this review

To check out more reviews by the Miketendo64 Review Team, feel free to click here and stay tuned for our second Gioteck product review, which is coming soon.