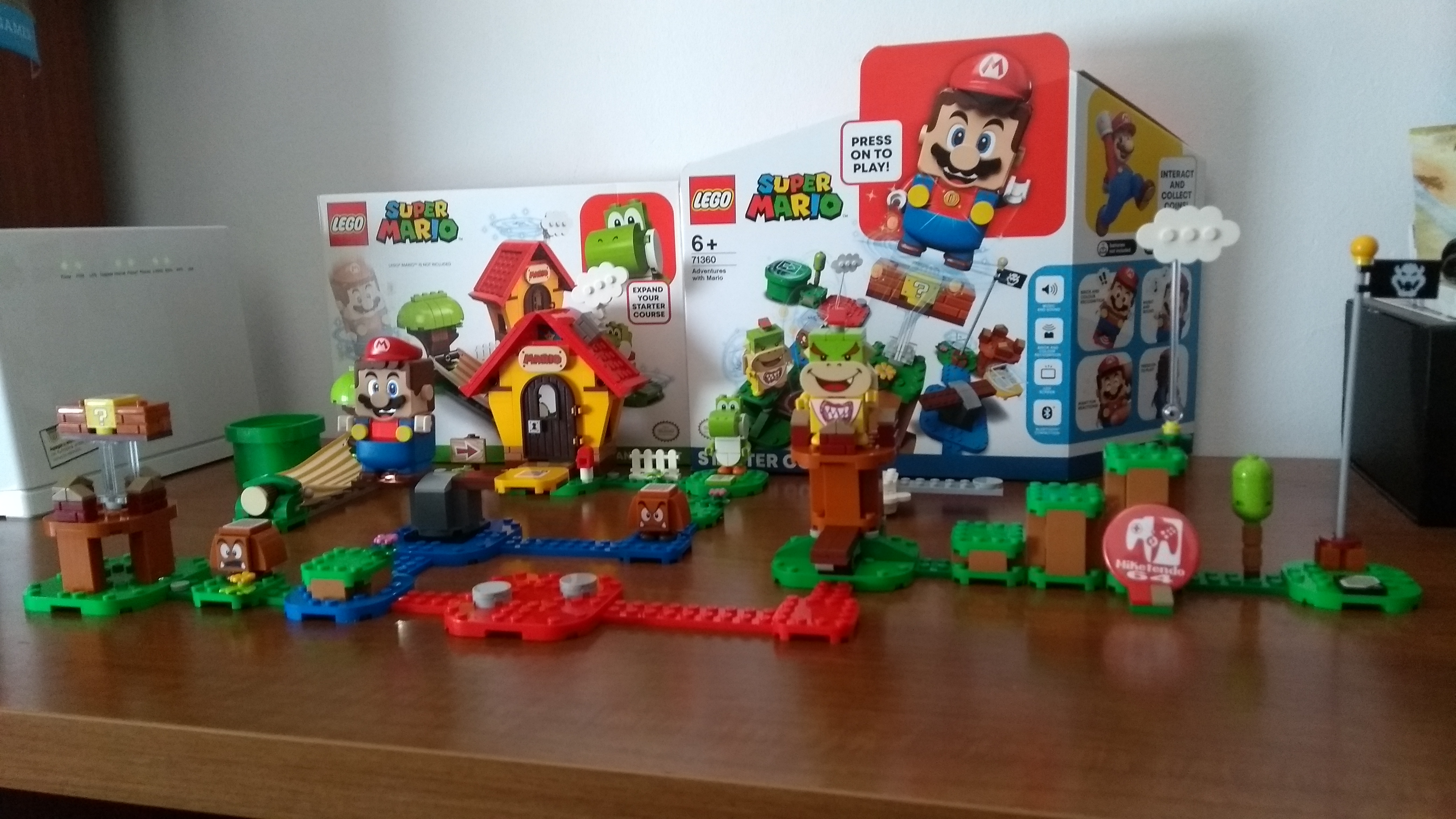 LEGO Super Mario has officially been released onto the world. The new toy range from LEGO launched worldwide at select retailers on August 1st, 2020. We were lucky enough to receive a product sample to test out ourselves and feature on our website. We would like to thank both the LEGO Group and Mischief PR for sending us a sample.

LEGO Super Mario is not what most people would have thought it to be like. It isn’t a staple Minifigure in the guise of Super Mario, it is something else entirely. Mario has taken on a new ‘blocky’ form that could have come straight from a leaf out of Minecraft’s book. LEGO Super Mario isn’t just a plastic figure, he has all the bells and whistles (literally!). By popping a pair of AAA batteries into our plumber’s back (with the help of a screwdriver and a touch of a button), Mario will be almost good to go, to set off on his newest adventure.

The stages have to be built of course (those bricks aren’t going to stack themselves). However, there are no physical instructions and you will require the assistance of the official LEGO Super Mario app. To download the app, you have a couple of options available. You can either use the QR code provided in the quick installation guide or search for ‘LEGO Super Mario’ in the Google Play Store or Apple App Store.

The app is actually very handy and can take you through the process of setting up your sets, brick by brick. Every step that is shown on the screen can be moved, rotated, and zoomed in and out of. If you accidentally skip a step, you can slide the progress bar along the bottom back to whichever step you have passed.

There are helpful videos in between instructions to show you how each piece you build, can connect or interact with one another. They are only a few seconds long but they can be insightful and offer you some ideas for your own designs. Once you have everything built, it’s time to bring the pieces together and create some courses!

I will admit that it has been a long time since I have last played with LEGO. By this, I do mean actual LEGO. The LEGO video games I have played from time to time. In fact, strangely enough, I was playing with LEGO well before I ever set eyes on a video game console. That was a long time ago though and playing with LEGO Super Mario has rekindled that love I use to have when I used to play with LEGO.

Connecting all the little LEGO bricks and parts together has always been quite a therapeutic experience for me. The added beauty of being able to “build” my very own Super Mario courses with an official LEGO Super Mario figure and sets was a dream of mine. It may have taken 30 odd years for it to finally happen, but as the saying goes “Better late than never.”

It is very clear that LEGO Super Mario is aimed for young children, ages 6 and up. It is not meant for the likes of adults such as myself but it is quite entertaining to create these little figures and obstacles and watch as they all come together. Of course, building the sets is one thing but what are the sets good for after building them? Why playing with them of course!

LEGO Super Mario can interact with most things in the course. With the scanner between his feet, Mario can read special barcodes that you connect to certain enemies, characters, or objects. The barcode for the Super Star, for example, turns Mario into Star Man. The Speech barcode will have Mario greet whichever character it is placed in front of though Mario will interact with any barcode, regardless of where it is put.

The scanner can also interact with colors like Green for grass, Blue for water, Yellow for sand, and Red for fire/lava. This includes the likes of bricks used in your courses and even surfaces that Mario is placed on. While Mario was activated, he burnt himself as he stood on the palm of my reddened hand. His chest displayed flames and he yelped in pain.

When Mario is placed in the green pipe, he will begin a countdown from 60 seconds. You must then take Mario through the course and collect as many coins as you can until you reach the end. LEGO Mario can be made stomp on enemies, or blocks and can collect coins for his efforts. The ? Block will generate a random reward for Mario that could be anything from the aforementioned coins to a super Mushroom, Super Star, or even extra time on the countdown clock.

When you want to add some extra challenges to your LEGO courses, you can expand your adventure with the expansion sets. There are a fair number already available that bring new interactive pieces and characters. While you can get a few sets quite cheaply, the majority of the sets can be quite pricey. Bowser’s Castle, for example, is at the steep end of the spectrum of around £89.99 / $99.99 / €99.99.

The enemy blind bags, on the other hand, give you the opportunity to add even more enemies to stomp at a more affordable price (around £3.49 / $4.99 / €4.99 depending on individual outlet prices). How you wish to expand your collection is totally up to you. We found the ‘Mario’s House & Yoshi’ expansion set too adorable to pass up!

LEGO Mario can also change his outfit for four other types. These include Fire Mario, Propeller Mario, Cat Mario, and Builder Mario. These “Power-Up Packs” cost about £8.99 / $9.99 / €9.99). When they are attached to LEGO Mario, he will recognize the Power-up and will display it on his chest screen. He can also make sounds to accompany actions like flying, climbing, stomping, etc.

I really did enjoy myself putting the set together and feeling pleased with my handiwork. While I may not play with it too much after the initial construction of the sets, I do see myself coming back to it from time to time to add another expansion set (and another). I love how LEGO Mario interacts with things on the courses and even with things that aren’t. Mario will make sounds for jumping, walking, and will even drift off to sleep if rocked gently!

If you would like to see some more images of the LEGO Super Mario Starter Set and the Mario’s House and Yoshi Expansion set, feel free to check out our gallery below.

Well, thank you for reading our Feature / Product Review on LEGO Super Mario. We hope you have enjoyed it and that it may have inspired you to pick up a set for one of your youngsters (or for yourself, we’re not ones to judge). If you would like to see more of our LEGO Super Mario content, feel free to watch our LEGO Mario Starter Kit unboxing and some ‘gameplay’ of LEGO Mario playing through our course.

If you would like to know more about The LEGO Super Mario range, be sure to visit LEGO US, LEGO UK

or your home country’s official LEGO website at www.lego.com