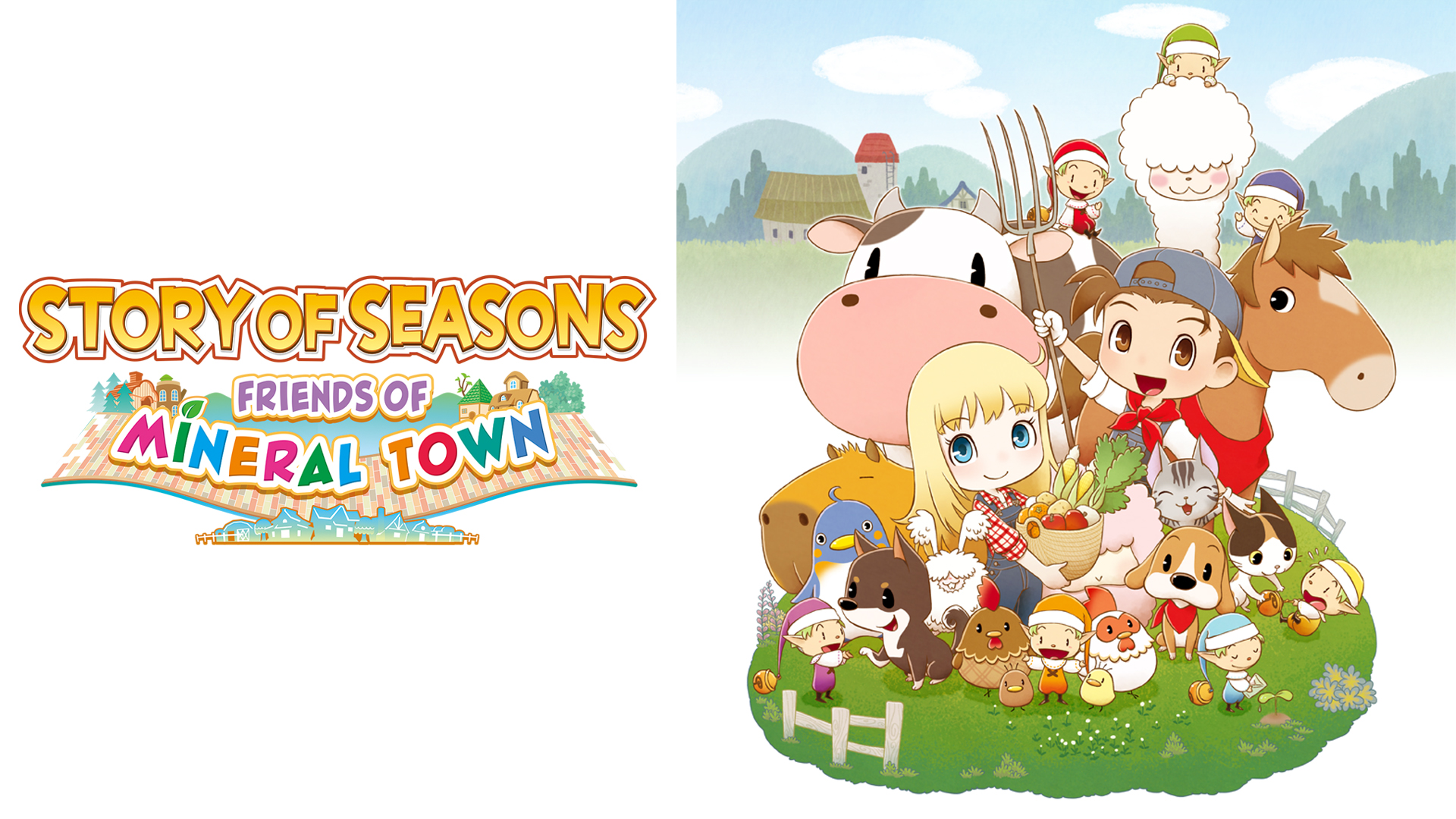 Back in 2003 (North America) / 2004 (Europe) a developer by the name of Marvelous Interactive released a game titled Harvest Moon: Friends of Mineral Town. The game was published by Natsume for the Gameboy Advance system. Friends of Mineral Town debuted as the first title in the Story of Seasons franchise and was a remake of the classic Harvest Moon: Back to Nature game which saw a release on the original PlayStation.

Now, over 7 years later the games original developers are back to deliver a 3D remake of the game for modern audiences. Originally released in October of 2019 in Japan, Story of Seasons: Friends of Mineral Town will see a July 10, 2020 release in Europe and a July 14, 2020 release in North America.

Much like its series predecessors, Story of Seasons: Friends of Mineral Town is a game all about life on the farm. You begin the game by receiving a letter from the mayor of a small town. Upon reading the letter the player decides to pack up and head to the train station to buy a ticket for a train to Mineral Town, where the player’s grandfather had his own farm.

Once you arrive you are greeted by the mayor who introduces you to your grandfather’s farm. Having been rundown for some time, the game then shows you some sequences from the player’s childhood at the farm. In those sequences, you enjoy life at the farm & meet a new friend before ultimately it’s time to head back home to the city.

Like with many games of this nature, Story of Seasons: Friends of Mineral Town is a slow-paced farm simulator in the vein of its predecessor Harvest Moon. Having inherited the local farm, you start off the game with a variety of different tools at your disposal to help kickstart your new life. From this point on the gameplay is all about personal choice on what you’d like to accomplish day-to-day.

You can clear out the field to begin making room for growing crops, head out to the town to introduce yourself to your new neighbors, or even go mining at the local cave. Whatever you decide to do, just know you are limited in hours in a day, so make sure to plan out your day accordingly to gain the most amount of profit.

Your day-to-day activities are accomplished via a stamina & fatigue based system. Showcased via the berry icons on the screen, daily activities like planting seeds, mining, fishing, and more will decrease your stamina the more you are active. Food can be obtained from crops you grow or via purchase in Mineral Town and will help replenish stamina, or you can spend some time at the local hot springs which will replenish stamina for free over a period of time.

Doing things outside at night or working in poor weather will also deplete your fatigue meter (represented in-game via the face icon). Building up too much fatigue will cause the player to collapse. Both of these can be regenerated by a good night’s sleep, eating, or visiting the hot springs.

Story of Seasons: Friends of Mineral Town features a variety of different activities for you to attend to when not doing your day to day tasks on the farm. The game features a seasonal calendar based on the four seasons of Spring, Summer, Fall, and Winter. Said seasons play a huge role in the game as it decides what you’ll be able to grow on the farm, what activities you’ll be able to accomplish, and more.

Each season has different festivals that the player can take part in when they arrive in Mineral Town for the day. The first festival players will experience is the Spring Derby in Spring. Here, players can take part in watching horse races in the plaza and even bet on the horse you think will win.

Story of Seasons: Friends of Mineral Town also features an in-depth social experience to help make your time in Mineral Town a bit more special. With a variety of townsfolk to meet, befriending residents will help unlock additional perks and bonuses over time. If a character likes you enough, you may even be given the chance to marry them.

Marriage in this game has no limits and there’s a decent selection of both bachelorettes and bachelors to fit your personal preferences. A first for the franchise, same-sex marriage, also makes its debut in this title. Once you become married you’ll eventually be given the option to have a kid.

But what about better tools? Well, the tools at your disposal from the start also have the ability to be upgraded. The Watering Can, Hoe, Hammer, Axe, Sickle, and Fishing Pole can all be upgraded as you play and manage farm life. Using tools like the axe for example when hitting trees will earn the tool some experience and as you level up said tool you’ll be able to give the blacksmith in Mineral Town some ore to upgrade the tool. Each one you upgrade will have additional bonuses for said tool, for example upgrading the fishing rod will give you the opportunity to catch bigger fish.

In addition to raising various crops, Friends of Mineral Town allows you to also raise livestock. A barn and chicken coop are available at the farm and can be used to raise Horses, Chickens, Cows, and more! Livestock can be purchased via a shop located within Mineral Town. A few days in you’ll also receive a baby horse you can raise on the farm for free.

At first, the game starts off quiet, aside from the sounds of the environment or sounds that the player character makes. You’ll be greeted with a lively soundtrack upon starting day #2 on the farm. For me, Story of Seasons: Friends of Mineral Town succeeds in its audio department.

From cheerful tunes to its relaxing soundtrack, it was a joy to just kick back and do day to day tasks at ease while hearing the sounds of nature at work. Both the farm and Mineral Town have their own music tracks that are catchy and upbeat.

Having originated from the Gameboy Advance, there wasn’t much that could go wrong in terms of the game’s overall graphics. Marvelous delivered this game to modern audiences with this 3D remake while keeping the games overall and original aesthetic. The visuals in Story of Seasons: Friends of Mineral Town definitely live up to the original game and previous entries in the franchise.

The performance was another point Marvelous delivered on in this remake. Having both experienced the gameplay in Handheld and Docked, the game ran flawlessly throughout my entire experience. Obviously like most games, it’ll run higher when docked, but for those who want to kick back and play in handheld, you will have an overall pleasant experience.

I’ll come out and say I never did experience the joys of the original game Harvest Moon: Friends of Mineral Town. I was fairly young at the time of its release, so to see the game coming to Nintendo Switch after hearing great things about the original left me excited for its debut in the modern era of gaming. I did come into this title with prior knowledge of the franchise having played the most recent entry Story of Seasons: Trio of Towns for the Nintendo 3DS.

In terms of gameplay, having been released in 2003/2004 nothing is outdated, and fans can expect everything they’ve come to love from the classic Harvest Moon titles to the more recent Story of Seasons games (if you own a 3DS definitely give those entries a try!) Although it was a remake for a fairly old game, Marvelous did everything they could to make it a great experience for the modern era while still retaining the games classic gameplay and aesthetic.

*A Day 1 Patch was made available after this review was written.

For those who have never played the original, or who have even played it, Story of Seasons: Friends of Mineral Town is a faithful remake of the original brought to life by its 3D graphics and is not to be missed on Nintendo Switch.