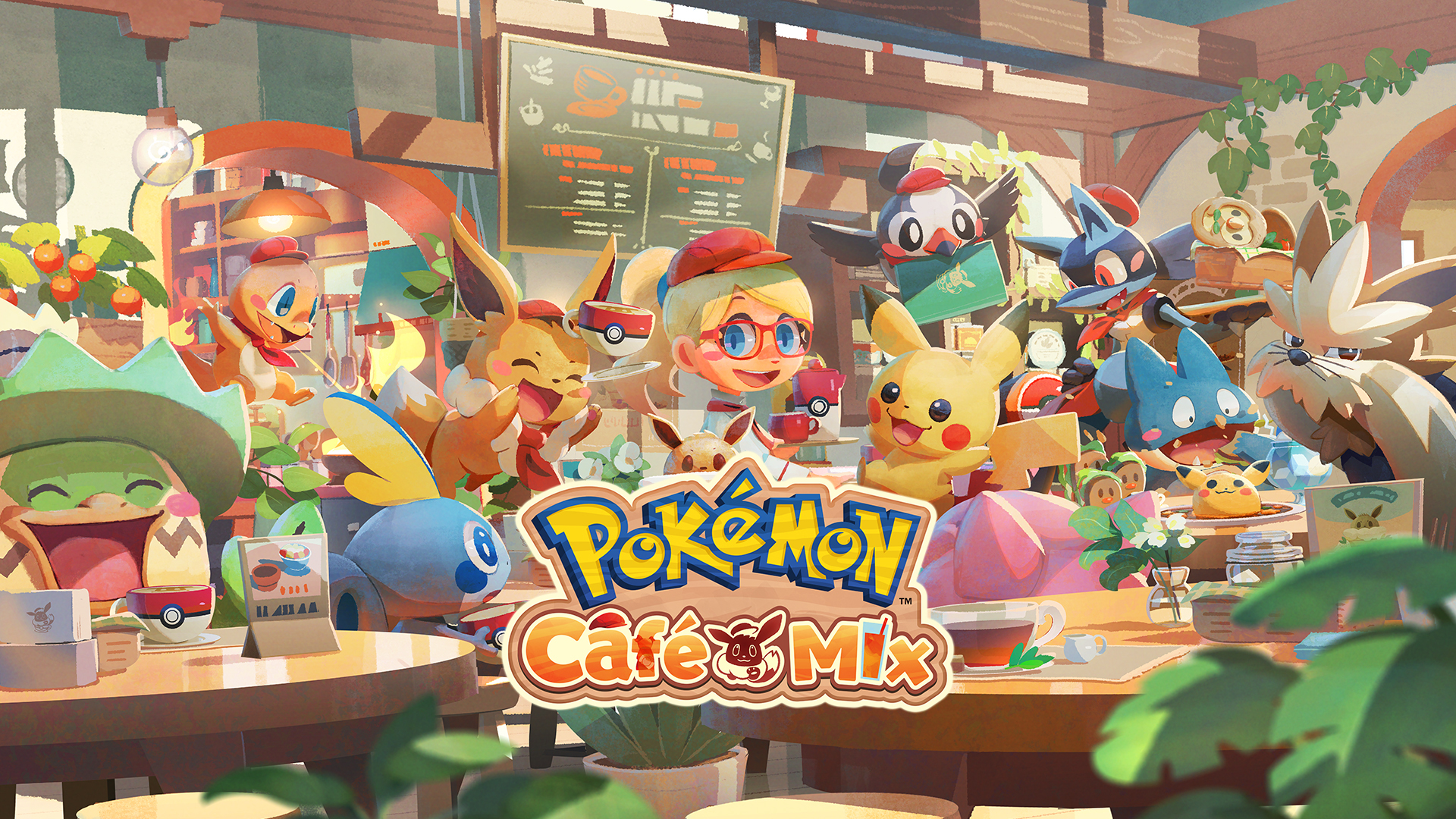 Revealed as part of a Pokémon Presents presentation on June 17, 2020, Pokémon Café Mix is a brand-new spin-off Pokémon title that is developed by Genius Sonority for the Nintendo Switch and mobile devices running on Android and iOS.

In case of any Amnesia or should you find yourself wondering why the name Genius Sonority sounds so familiar, it is because, in addition to Pokémon Café Mix, they have worked on numerous Pokémon games which includes: Pokémon Colosseum, Pokémon XD: Gale of Darkness, Pokémon Shuffle and many others.

Suffice it to say, when it does come to the Pokémon brand, they do know what they’re doing and having seen how well they supported Shuffle, it does look like Pokémon Café Mix could have a long life ahead of it.

The story of Pokémon Café Mix, is one that revolves around a café, in which the player acts as the owner of, with the help of human NPC Leah. Although the intent was to serve human clientele, instead your culinary creations end up being the talk of the town by the Pokémon who visit your café instead.

Still, there’s no time to get complacent, there is work to be done, orders to be met and fantastic dishes to serve and if you wish to cater to a wider range of Pokémon, your café will have to endure a serious of upgrades should you wish for more Pokémon patrons to stop by.

It’s time to abandon those dreams of becoming a Pokémon Master, for the time has come to aspire to be the owner of a Master Café and Take Down any competition. Just be careful not to end up in a Bind because, if you don’t lose your (Tenta)cool and (Ma)choke, you can go on and be a (Ma)champ. It’s not a Farfetch’d fantasy my (Geo)dude.

Simply put, Pokémon Café Mix is a (Butter)free-t0-start puzzle game, where by completing orders, players can befriend the Pokémon that come into their café and, once enough friendship has been attained, have them join your employ as staff members, which in itself is a worthwhile endeavour.

You see, while you might not be able to (Vul)pick your preferred started and instead, start off with an Eevee, each Pokémon in-game has their own speciality with regards to what dishes they are best suited to making and capable of using skills, which can go a long way to completing orders.

With regards to the orders aspect of the game, each order is a puzzle stage where players will be given completion requirements and a given number of moves you can make, so unless you can get a Vise Grip on the situation, it is easy enough to use up all of your moves without completing all requirements.

There’s nothing to fear(ow) from defeat, however, since there is a health system at play, with players having a total of five hearts, so should you fail a level, thus failing to make the Cut, you can always try and try again until you either run out of hearts, or you manage to prove victorious.

In the event you run out of hearts, by allowing yourself to Rest up, you can Recover one heart every thirty minutes that pass, but for an added advantage in battle, should you need it, you can always rely on a few Pokémon power-ups that can help turn the tide to your (type) advantage. Of course, should you fail your current order, you can always use the likes of Golden Acorns to purchase an additional three (Z-)moves.

Should you wish to do without the aids, however, players are free to resort to the default gameplay tactics of quickly selecting one of the on-screen Pokémon icons and linking them together with as many of the same icons as possible, to obtain as high a score as possible before they all burst. Incidentally, you need only to link two icons together to make a combo.

The stronger the combo, however, the quicker you can fill up your Café Skill gauge, which when filled, adds a café skill icon into the level that you can use to clear out all icons and gimmicks that within its effective range, but what are these gimmicks?

Gimmicks are another piece of the puzzle and an obstacle to overcome. Ranging from oil-covered icons, to marshmallows trapped in jars, caramel, sugar cubes, whipped cream, tomato, nuts and more. For the most part, most gimmicks can be cleared, activated, or ceased, by creating a combo next to them. Some. however, likes nuts, require the use of skills and megaphones to clear them.

Without a doubt, the gimmicks are the hardest part of Pokémon Café Mix, they are the true challenge and without the proper focus(punch), you can easily go from clearing orders with little to no difficulty, to having to play the same one over and over and over again, until you can finally best it.

Some levels can seem infuriating and put me into a (Poli)wrath filled Rage a couple of times, but when you get those moments where you can see the (Vanil)light, you’ll be clearing puzzles left, right and (Pokémon)centre and during moments where Friendship bonus is engaged and more stars can be obtained upon order competition, well that’s just a Lovely Kiss if you beat it.

In addition to completing orders, the main bread and butter of Pokémon Café Mix’s gameplay, in its current state, it does offer a range of available content with plenty more to come in due time, via free updates.

One such update being the fact more orders are to be added bi-weekly, and there will also be a special event in July where players can attempt to recruit Scorbunny, provided true friendship is attained first.

On the subject of staff, right now there is currently a number of 15 base Pokémon, which consists of all three Kanto starters, and numerous others. However, while most potential staff Pokémon require you to complete a set number of orders to have more Pokémon appear, players can actually obtain a Pikachu, but only by logging in for five days.

For an extra special Sweets Pikachu, that you’re willing to pay(day) for, you’re more than welcome to purchase a special DLC pack. Of course, should you wish to make it rain(dance) and spend some more of your hard-earned cash, you’re welcome to purchase some of those valuable acorns.

Other in-game features at play, however, are the café upgrades, which in addition to bringing in new Pokémon to visit you, can also see new utilities added for new menu items, put up decorations and even increase the size of your premise, enabling you to serve even more patrons. What’s more, once a day, players can invite two Pokémon that have frequented your café once before, to attend a small tea party.

During this period, provided you can serve them their desired orders by completing special orders, you can increase your friendship with them and get a couple more vital stars in order to employ the Pokémon who show up, or increase your friendships with current staff members, potentially levelling them up and further enriching their capabilities.

For even more of an added challenge, however, for those of you brave(bird) all regular orders, you can unlock Master Café Mode, which allows you to play through the previous orders, but now with an added difficulty. Players can earn stars that they can exchange for Master Points, by completing the harder levels, but they will vanish when new regular orders are added, such as the ones coming in July 2020.

Then, as another means of testing a player’s steel resolve, there are in-game challenges, which can vary in nature and reward you with various useful prizes.

Featuring a simple, but jaunty Parisian soundtrack and above generic sound effects that gets the job done, why it might not go on to win awards, Pokémon Café Mix is still an enjoyable game to listen to nonetheless.

Where Pokémon Café Mix lacks in the audio department, it soon makes up for it when it comes to visuals. I absolutely love the colourful artistic aesthetic at play. I’m sure the Smeargle behind it is pleased of their creation and I love how the creativity to this game, is present throughout.

It’s not just the designs of the Pokémon and the café that look impressive, but the menu items as well. There is no shortage of imagination when it came to their creation. I would be lying if I said I didn’t wish they were real so I can Swallow one or two of them. They’d certainly give me a Helping Hand in my efforts to Bulk Up.

Granted there is a bit of Gen I pandering at play, what with plenty of Kantonian inspired meals and employable staff Pokémon, it does bring me great pleasure to see some Gen VIII representation at play.

I would have loved to have seen more spin-off games utilising Gen VII, but it was not meant to be, but at least Pokémon Café Mix has opted to include a Yummy Yamper Pasta as a menu item, and reveal both Scorbunny and Sobble as in-game Pokémon set to make an appearance. I very much look forward to obtaining them both.

As for any criticism I have, surprisingly, I don’t have any. Not really. Yes, it is a shame that Pokémon Café Mix on Switch, can only be played in handheld mode, but the touch-screen controls are very responsive and as a free game that no one expected on Switch and I actually do prefer playing this on my Switch than I do playing it on my android device.

Furthermore, at the end of the day, Pokémon Café Mix is a puzzle game that performs exactly as it says it does. There are some things that could be done to make it more of an enriching experience title to play, but this is a game evolve as time goes on anyway, and there is nothing wrong with the current package. Especially since it doesn’t force its microtransactions upon the players. This alone makes it a bit of a king(ler) in my book.

“Gotta Employ ‘em all?” For a Pokémon game we never (Venu)saw coming, Pokémon Café Mix is a charming little title that is more befitting a Sweet Kiss than to be thrown out with the rest of the (T)rubbish and I can honestly admit to spending more time with it than I ever expected. Who knows, you might just find yourself having a blast(oise) with this one as well?