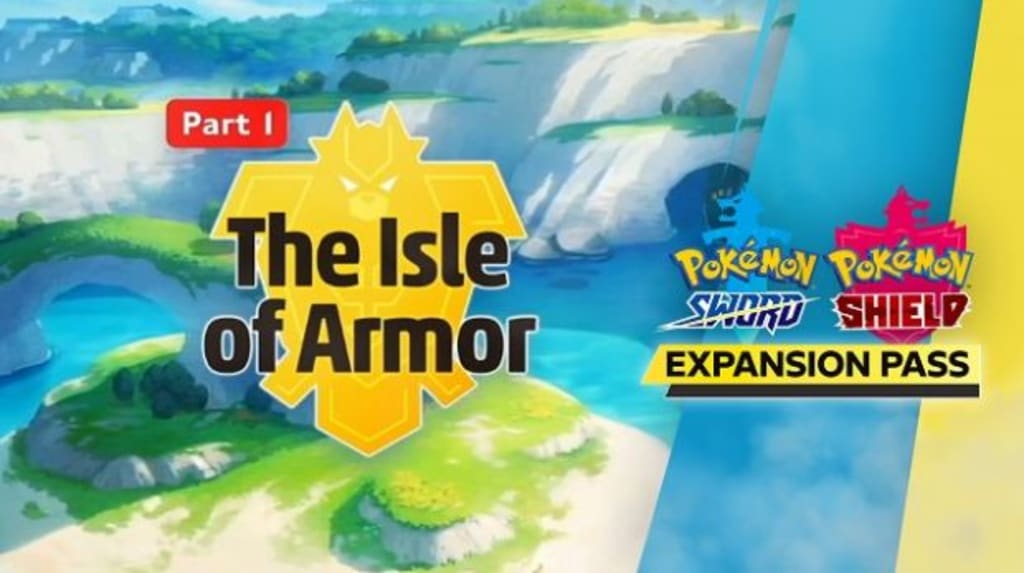 *The following article is a joint piece by Solid Jack and Mike Scorpio:

For the Trainers who opted to pick up the Expansion Pass for 2019’s Pokémon Sword & Pokémon Shield, the time has come to take in the sights of the Isle of Armor and indulge in all that it has to offer.

Now that 100 hours have passed since the DLC released, Jack and Mike are on hand to share their thoughts on this new adventure. Spoilers will be avoided where possible, but do not think of this as a review, as we feel it would be wrong to do a review on the Isle of Armor on its own since it is not something you can purchase separately and part of something bigger as it is the first half of a two-part Expansion Pass.

Instead, this is an opinion piece where two writers have come together to share their thoughts and views on their latest Galar outing:

With the Armor Pass to hand, it is time to set off on a new adventure and adventure is the key word. While it is true the Isle of Armor does possess a story for players to playthrough, which Mike will actually be covering in his part of this article, adventure is actually the true focus of this new location.

For a bigger, fuller story, The Crown Tundra is the DLC you will want to check out when it releases this year, because The Isle of Armor is all about exploration and I am loving what I am exploring.

Not for a single second did I expect Game Freak to suddenly upscale everything and have everything put the main games of Sword and Shield to shame, so on a graphical scale, I’m not disappointed in the slightest. Instead, I’m actually overjoyed.

Trees and grass may look the same as it does, but the presentation is entirely different. Instead of a singular Wild Area taking up a good portion of Galar, all of the Isle of Armor is a Wild Area and the variety is lit.

From the beaches to the open ocean, to diverse caves, a desert and more, the Isle of Armor is a sight to behold and the more time I spend exploring, the more I found myself wishing the full games could have been like this. It might have reduced some of the complaints. Not all, just some.

Still, it’s not just the sights that are easy on the eyes, but the Pokémon as well. With the whole location being a Wild Area, there are plenty of Pokémon to stumble into in the wild and some of the interactions are just perfect.

As a scuba diver, I have a love for sharks and Sharpedo is one of my more favourite Pokémon. I was actually hoping Sharpedo would make it in and my hopes were well-founded, but never in a million years did I expect them try to behave like something out of a Jaws movie.

When you stumble on them out in the water, they are all too happy to pursue you and honestly, the scuba diver in me refuses to swim away from them. I want to see them up close, even if I must send out my Inteleon and kill them in one hit. Majority of the time though I actually throw a few Poké Balls at them and see if I can catch them first.

My only regret regarding Sharpedo however, is while I do possess a Shiny Carvanha that I have every intention of evolving, my Carvanha currently resides in Pokémon GO and currently, there are no means of transferring him over just yet. (Why?)

Other Pokémon in the Wild I couldn’t help but head over to, includes the likes of Galarian Slowpoke, Tangrowth, and of course, Wailord. As one of the first things I saw when I left the Corviknight Station, I made something of a beeline for it.

I loved every second of my battle against its Level 80 might and no, I didn’t defeat it. Instead, I caught it and for a brief while, it was part of the new team I would use in the Isle of Armor.

Speaking of Pokémon, whilst the likes of Zarude is supported in the Isle of Armor, just not officially released yet, there is still a total of 210 Pokémon you can set out to catch right now in your efforts to fill out the Isle of Armor Pokédex and while I’ll admit I added quite a few from Pokémon HOME first, it was a good thing too as it gave me first-hand experience with a bug currently in effect.

If you transfer your Pokémon from HOME to Sword or Shield, before you obtain the Isle of Armor Pokédex, when you do get it, they’ll all be automatically registered. If you transfer them after you get the new dex, however, they won’t be registered and you will have to go to a Pokémon Breeder.

By leaving each and every missing Pokémon with them and taking them back, they will be registered this time, but remember, you can only do 2 Pokémon at once per breeder. Of course, you can do the other thing and just catch them in the wild, but there is still an annoying bug at play that does warrant patching.

Just in case catching ’em all doesn’t appeal to you and you seek another reason to explore the new areas, I hope you like Digletts! Alolan Digletts that is! There are 151 of them to be found and whilst in some areas you can see their hairs sticking out above the terrain easily, in other areas, they can be hard as hell to spot, but a true Detective Pikachu will find them out no problem. Of course, the good detective would do so without asking for a reward, whereas we, we’ll happily take all the Alolan gifts we can get.

I purposefully set my expectations low when it came to the Isle of Armor and as a result, I was not disappointed. The process to evolve your Galarian Slowpoke into a Galarian Slowbro is bit of a slug, but I just love his design so much that I actually made it my priority to get one, before I would play through the story. He’s a worthy addition to any Trainer’s team.

Because I’m waffling though, the fact of the matter is I enjoyed my time on the Isle of Armor. The Alolan Diglett quest is tedious at best, but at least we don’t have to find 900 of them. (Looking at you Korok seeds.)

Still, it’s a worthwhile adventure and a good sign of what is to come. Gen 8 still has plenty to offer and hey, I got to complete yet another Pokédex. Nice job Game Freak, you get a thumbs up from me, but do us a favour and fix the Pokémon HOME bug.

“Everybody is Kubfu Fighting!”

Jack has covered the principles of the DLC, so I get to focus on what the Isle of Armor is all about… Kubfu Fighting!

When you first step out onto the Isle of Armor from the Corviknight Station, you will be greeted by your new rival. For me as I have Pokémon Shield, it was Avery. The eccentric Pokémon Trainer doesn’t take too kindly to you, especially after you give them a good thrashing. Avery tries to put you off from gong to the Master Dojo, mainly because he wouldn’t his dreams of becoming a Gym Leader would be dashed should you outshine him.

Ignoring Avery’s words, I took in the sights and battle a few Pokémon while I made my way over to the Master Dojo. Inside is where I would meet my new Sensei, Master Mustard. The old guy may look frail and has a good sense of humour but he certainly has a mystic air about him.

Being accepted into the Master Dojo and having to undertake trials was a nice change of pace. Having to chase down the fast Slowpoke was certainly something I wasn’t expecting. I was glad I had my souped up bike to make catching them easier, it may have been quite tasking to catch them without the upgrades.

Upon completing the other two trials, I was finally permitted to have Kubfu join my team. The little guy is quite shy at first and requires plenty of attention in order to warm up to you.

While there are special spots in the game where you can take Kubfu so he will warm up to you, I chose to to set up camp, play with him and cook him a nice curry. What do you know? It did the trick and he was well on his way in trusting me.

I did enjoy the unique fights in that you could only use Kubfu against the other trainers. It made the game feel different in a way. You have to focus all your effort into training just one Pokémon instead of a party of six. My Kubfu still wasted the opposing Pokémon but he was like 10 levels higher than them to help give him an advantage.

I shall leave talking about any further progress because the story is rather short and I don’t want to spoil everything. What I will say is that the journey was kind of fun and watching little Kubfu get past its timidness and get stronger and eventually evolving has felt more impactful than all the other Pokémon I have trained and evolved along the way.

As regards the new Rival, I didn’t care too much for them. I appreciate Game Freak returning to their roots with an arrogant and competitive rival. However, I didn’t much like Avery’s personality and if I am lucky to not encounter him again in The Crown Tundra DLC, it wouldn’t bother me at all.

In the trailers prior to the release and the short introduction of meeting him when purchasing the DLC for the first time, you think “This is certainly an interesting character”.

The reality though is that they are another bumbling buffoon you would rather not waste time on. (Sorry Avery but it’s true, oh and Jack wasn’t too keen on Klara either.)

The Isle of Armor doesn’t expand on the story as one would think but is more like a short side story to indulge in. The addition of a new rival fell completely flat with me and would have preferred if Hop had been beside me for the new adventure. I loved Master Mustard and his character arc. The Highlight for me though is watching my little Kubfu become a Martial Arts Master… Rapid Strike Style!!!