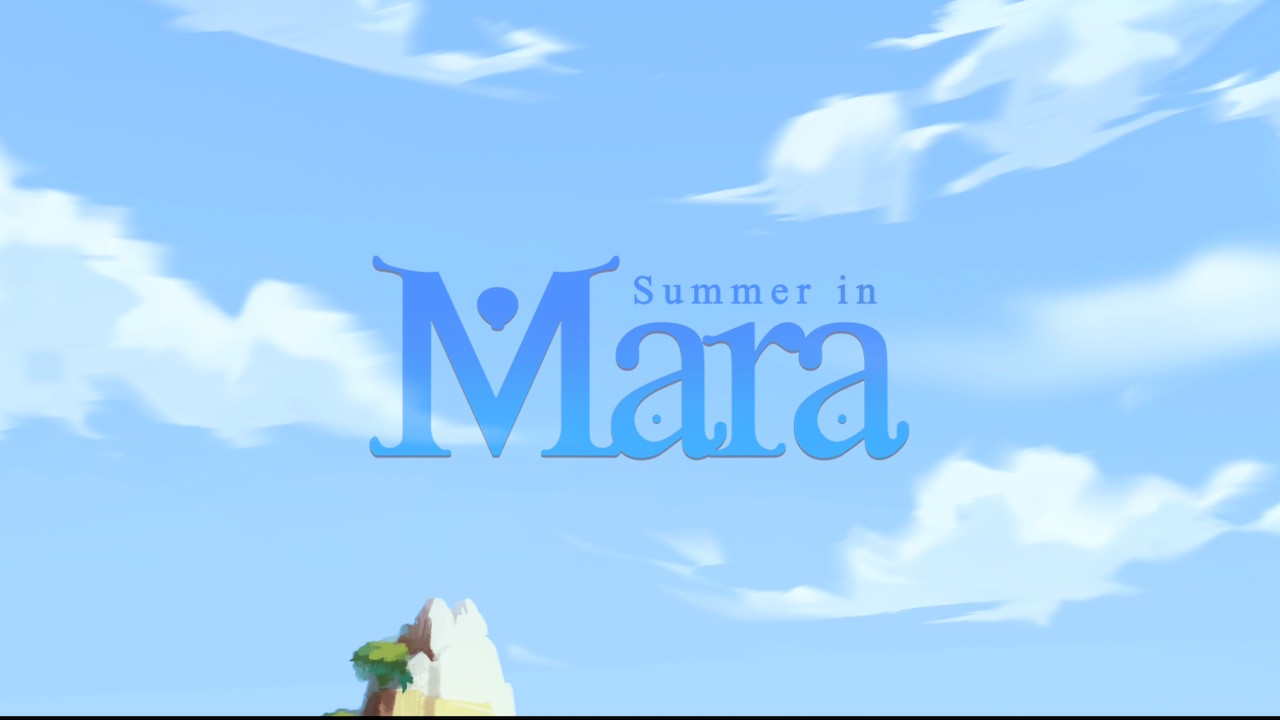 Summer in Mara, by Chibig, started out as a Kickstarter back in February 2019 and surpassed its financial goal raising over $265,000 USD. The game went through a few setbacks in terms of release dates for all the major consoles and PC which was somewhat disappointing as I had backed the game early on and while perks like stickers and artwork from the game was a nice bonus, the wait just seemed to take forever.

As a backer, I was privy to game updates through their Kickstarter page and as time went on I waxed and waned over my excitement as it seemed the games long development time and trying to hit all the major consoles also drug down the quality instead of if the developers had targeted specific systems for launch.

Summer in Mara has you play as Koa, a young girl taken in by Yaya Haku, as a young girl after the boat she was on catches fire. Rescued from the ocean waters, Koa is taken to the Home Island in Mara and raised by Yaya. The game kicks off with you as Koa wanting to travel the ocean and have adventures, but Yaya goes traveling and doesn’t return. So Koa takes it upon herself to sail the seas.

Before you can go on your journey though, and before Yaya Haku goes missing, Koa must learn a bit about growing foods, harvesting, cooking, and planting trees. In this way Summer in Mara has crafting similar to Animal Crossing: New Horizon, StarDew Valley, My Time in Portia, and Minecraft.

The game starts off with pretty simple gathering items you have on your island, but then after discovering a small being named Napopo a strange seashell-like character that seems to be lost. Koa decides she’s going to help Napopo find her family and get back home and sets sail to the main island in Mara.

The townspeople in Mara’s multiple islands are unique. Each of them has a history in Mara which you learn about and uncover as you help with tasks such as catching fish, building items, growing food, joining in the commerce of the land, and more. As you learn early on in the game there are several characters you will meet that will want to interact with you, from the catlike Onzo and Mayo, to the fishlike people Noho, Brram, Taka, and Caleb. The gruff Awan looks like a beastly ram or yak and Aquila is one of the only humanoid characters, though with a purple-tinted skin and greenish colored hair.

Each of the characters you meet will help you along in your journey, usually though, only if you help them first. In this way Summer in Mara is the longest fetch quest game I have played in a long time. While I enjoyed some of the crafting, harvesting trees and planting in your garden become more of a chore, which can easily be bypassed by sleeping, there’s not much to the various shallow mini-games that game throws at you. Fishing for instance is a game of line up the bar under the fish icon and move left to right without snapping your line. Chopping trees or hammering rocks for wood or metals and minerals respectively is mostly just mashing a button and then picking up your spoils.

While you are accomplishing these tasks Koa also needs to sleep and eat as she has a stamina and hunger meter. The penalty for letting Koa relapse without resting or food is just that you wake up the next day, which is fine, though it would have been nice to either be penalized for overexerting Koa or not have the meters at all which serve only to slow you down.

Along with crafting there is a great deal of story told through conversations with the townspeople you meet. It should be noted though that there are other people strewn about the towns and islands that you can not interact with and only serve to fill out the landscape and make the islands feel more full than what they really are. I found myself speed-reading through the dialogue boxes which sometimes were more surface-level conversations and rarely seemed to move the story long.

One issue with the questing nature of the game is that sometimes it was hard to know where you had to go to find or craft certain items as the in-game information was scarce. Early on in the game I needed some thread and couldn’t for the life of me figure out where to go next when simply I needed to swim out to my boat and get on it, whereas I thought I needed to complete the pier to be able to board my boat.

The boating sequences, which were reminiscent, though worse than The Legend of Zelda Windwaker, served mostly as long traveling areas between islands which dotted the world of Mara. Along the way you could run into materials floating in the sea, sort of like the boating in Assassin’s Creed games that featured floating trash or treasure in the ocean.

The developers of Summer in Mara boast over 300 quests in the game, though I have a feeling that most of them are repetitive in nature, like making a salad, finding a certain fish or shell type, feeding someone some orange juice, planting pumpkins, and more of the same ilk. There were some early quests in the game that do have multiple steps like when you first get your map or get your upgraded tools. These quests at least attempted to intertwine the multiple threads of the story and link you to more than one character, maybe one character owing some money to someone else, or someone wanting to secretly impress their boss at the restaurant.

Summer in Mara has almost thirty interactive NPCs along with its story campaign, as well as multiple mini-games within it like the aforementioned crafting, cooking, fishing, and building, the problem is most of the options within the game are bland and repetitive and not really fun and engaging, at least not to me.

You do have the ability to customize Koa with various outfits and backpacks along her journey. There are also twenty islands to explore, though some of them are very very small, and most uninhabited. There are hidden messages throughout the game as well in the form of the crab mail system, which is silly, as you will find crabs with letters in bottles tied to them walking the shorelines or floating in the ocean.

Summer in Mara’s audio is an interesting bit. As I found while playing the game that the background music would sometimes just stop for no apparent reason. I couldn’t tell if this was because the game was loading a new soundtrack or if the song had run its course.

Other than background music, Summer in Mara has sound effects that are ok, like when you harvest your garden or kick a tree. The effects are nice, though basic. There’s no spoken audio in the game though characters do have a sound byte that helps you imagine what their voice might sound like.

Summer in Mara is a bit of a mixed back when it comes to visuals. I experienced several instances of texture pop-in and buildings just jumping into view while playing docked. I also noticed trees and grass would slowly appear more and more detailed as I got close but with that jarring jump to fully textured. There were times when I was able to get Mara stuck in geometry in the city as well. There’s an odd gradient surrounding the sky in Mara as you look out to sea, and the islands pop into view behind a fog.

The islands of Mara are lush and full of life, though in some areas trees are scarce and the landscape just feels like something to run in from point A to B without much to do in between. You will find yourself often holding the run button or jumping from destination to destination since walking is slow and boring.

During my time in Mara I had experienced at least two quest glitches, which halted my progression in the game, though the developers have stated that they will be patching them in day one launch updates. I had one or two system crashes as well though I could not recreate them, and am not quite sure why they happened in the game.

The game runs fine without hiccups or long load times, though you will get a loading screen when you go from island area to island area which adds to the chore of sailing.

Summer in Mara is a game that I had been wanting since I first pitched in on Kickstarter back in February 2019. Along the way, I saw the development process and got more and more excited about the game that would one day come out. After having spent some time in Mara, I will say that while not totally a letdown, Summer in Mara is a disappointment in a game I had hoped would be great. If you are at all interested in the game check out some Let’s Plays or other videos and see for yourself the game that Mara is, and sadly, isn’t.

The world is vast and interesting, but getting from place to place is a slow trod unless you want to spend the money to get to where you need to go. Characters are interesting and tell the story of Mara, but interacting with them is done through long strings of fetch quests and there’s not much in terms of liveliness in the various people you come across. Overall the game is just ok.

Summer in Mara is unfortunately the product of ambition being grand and not quite hitting the mark. The game has great artwork but suffers visually in some areas of the world looking bland and flat. There’s a lot to do, but some of the things you do are just boring and not fun at all.

One thought on “[Review] Summer in Mara (Nintendo Switch)”