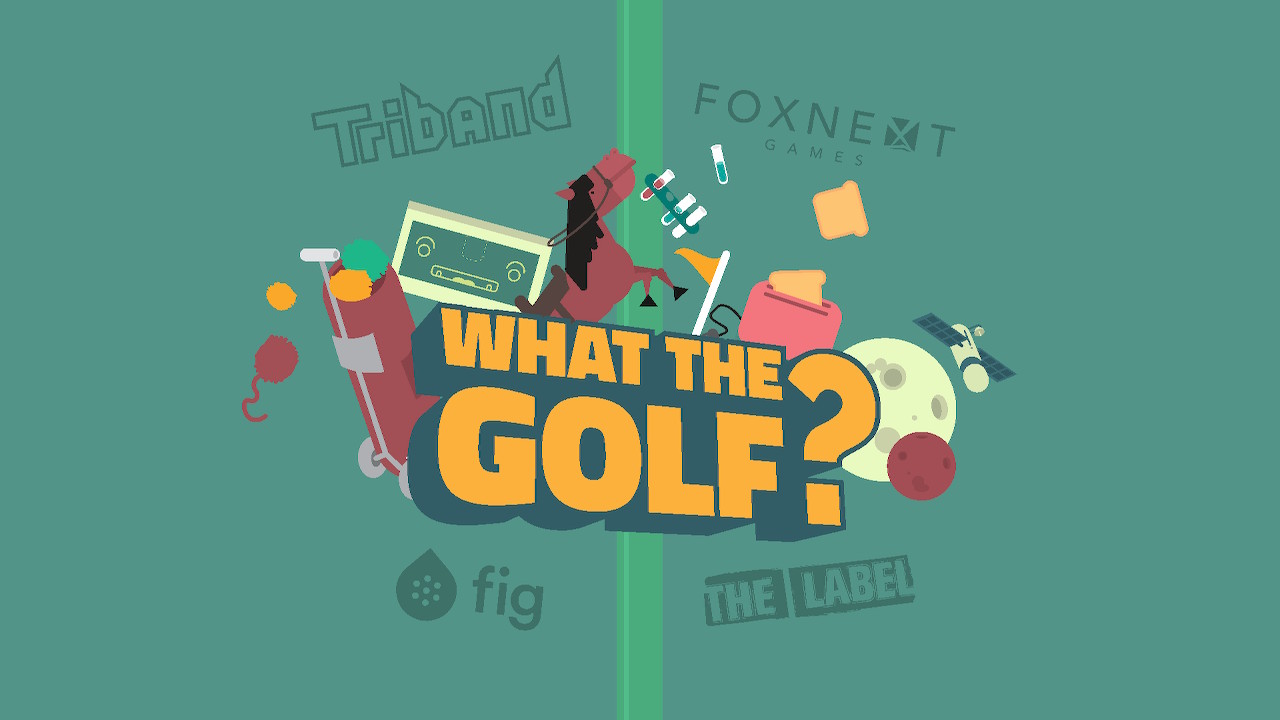 [Review] WHAT THE GOLF? (Nintendo Switch)

What the Golf? was developed and published by Triband, a small indie team from Copenhagen, Denmark. The game first released on Windows and iOS via the Apple Arcade in September of last year. It was brought to the Nintendo Switch on May 21st, 2020. The new Switch version includes a brand new competitive two-player mode and touch controls.

What the Golf? is the kind of title that doesn’t need a story as the main attraction is the gameplay. Having said that, there is indeed a “story”, but most of it shows up during the final few minutes of the game. I don’t want to talk about this aspect as it goes into spoiler territory.

You may be surprised to hear that… this isn’t really a golf game. It’s made very clear from the start that this is not your traditional golfing experience. Sure, the objective in most levels follows the basic premise of golfing, which is to hit the ball to the flag. But it’s constantly innovating and bringing in new ideas to keep the formula from ever feeling stale. What the Golf? stands out because of the unexpected twists to the golfing experience.

Most of the time you won’t even be hitting a ball. You’ll likely be golfing a horse, a house, the golfer himself, just to name a few things. Other times the objective changes completely. For example, you might be playing football or bowling, racing against other cars, hitting a bullseye in archery, helping a crab plan out a party, beat a sheep in a race as a tortoise, boil eggs, etc. There are even some levels with no flag at all, instead, you must complete a puzzle.

I burst laughing-out-loud on various occasions when discovering new mechanics that spiced up the gameplay. A lot of the humor comes in the different visual gags and being able to frequently exceed expectations. You don’t really know what you’re swinging at until you make the first move, and this usually is some funny prop you weren’t expecting.

Better yet, unlike many games where you’ve seen everything within the first few hours, What the Golf? regularly brings in new gimmicks, even at the final boss fight. These never overstay their welcome, so the gameplay never gets repetitious. There is a level mechanic introduced late into the campaign that was so unexpected it made my jaw drop, it came out of nowhere and was ingenious. Obviously won’t spoil what it is, but as a hint, it revolves around playing in handheld mode.

I won’t go into too much detail into this aspect (because it’s quite simply amazing to discover these yourself), but there are many references to video games and pop-culture. They are more than just “references”, some play right into the gameplay, but with the recurrent golf twist.

There are a few modes to talk about. First off is the main course, the “Campaign”. You advance via a level hub. There’s the main path, which is blocked off by walls that you must destroy. At the roadblock, the path branches out to various themed sections that revolve around the areas’ level gimmick.

Each course is separated into three categories. The main course (you need to complete these to beat the game), a harder version of that same course and one final version that adds a twist. Once you complete all three objectives you’re rewarded with a crown, obtain all crowns in a section to unlock an artifact. There’s twenty-four in total and that’s how to 100% the game. Speaking of which, it took me around seven and a half hours to beat the campaign and unlock all the artifacts.

Then there’s “Party Mode”, new to the Nintendo Switch version. This is a local two-player versus mode where you compete to reach the flag first. After a handful of courses, you arrive at the Coliseum, where you fight to the death (think of it as Mario Party’s “Bumper Ball” minigame with projectiles to fire). The more points you obtain by winning, the more lives you have. It’s an incredibly fun competitive mode that my friends and I had a blast playing. It’s something I’ll definitely come back to and play in the future.

The following modes aren’t quite as prominent as the previous two but are worth mentioning either way. “Show to a Friend” is a mode with twenty predetermined courses from the campaign meant to exhibit what it has to offer. I really enjoyed watching my family give the game a go via this mode. They got familiarized with the gameplay and had a lot of fun playing. “Daily Challenge” is a mix of courses that change every twenty-four hours. Your results go on an online leaderboard (random fact, I managed to get in the Top 3 once). “Achievements” is an online leaderboard that registers how many strokes you took in the campaign.

The “Impossible Challenge” was to my surprise, not impossible to beat. It’s quite a challenge that took me 745 strokes to complete. It’s a mix of new courses and some from the campaign. Finally, I’ll quickly mention “Settings”. There are options to change the language, modify volumes for music and SFX, play on multiple save files, and of course the credits.

Controls are very basic and consequently make What the Golf? a very accessible game to play. Use the analog stick to aim and control the force of the stroke. Use any of the face or trigger buttons to swing. Additionally, the Nintendo Switch version introduces touch controls, which work great in handheld mode and is just as easy to use.

Sound design is great, the same goes for the soundtrack. Most tracks are soft, joyful, and relaxing. However, at times the music changes in genre and goes into rock n’ roll or electronic territory, for example. The soundtrack reminded me a lot of Rayman’s OST, which has that same “bouncy” cheerful feel.

Visually, the design is mostly simplistic but it maintains a certain charm to it. The gameplay jumps between both 2D and 3D styles. When in 2D, it’s generally a combination of geometric shapes, while in 3D it’s mostly low-poly models. I like the soft colors used in the color pallet, nothing too vibrant to become irritating to the eyes. As for performance, I had no issues at all with the frame rate. It stays consistent throughout the entire playthrough.

The only segments I wasn’t a fan of are the alternate challenge courses with a limited amount of strokes to complete. Some of these levels are particularly frustrating to play, as the restriction is quite tight and require precise movements to complete. This isn’t a challenging game, so having strict challenges felt quite off and could take a good amount of time to complete.

There is more content being worked on for the near future, which is great news to hear as the game is simply a joy to play!

WHAT THE GOLF? is an outstanding game any fan or hater of golf should experience. Why play boring old golf when you can have this? It’s clever, humorous, and easy to play. An absolute delight to go through from start to end.