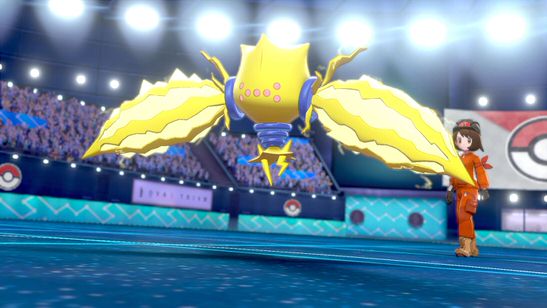 Thus, welcome back to “Who’s That Pokémon?” and this time, we’re tackling the Electron Pokémon Regieleki:

Description:This Pokémon absorbs electrons to live. Electrical energy makes up most of its body. Its Electric-type moves are said to pack the greatest power of any used by Electric-type Pokémon.

Researchers have determined that Regieleki’s body is fitted with what appears to be special insulating equipment that does not conduct electricity. Some theorize that in ancient times, people tormented by Regieleki fitted the equipment on the Pokémon to restrain its powers.

Signature Move (Thunder Cage): In this Electric-type special move, the Pokémon fires furious bolts of electricity from its lower half, trapping opponents directly below it in a cage of lightning. Thunder Cage doesn’t only deal damage to opponents when it lands—it will also cause them to be trapped within an electrified cage, causing damage every turn for four to five turns and preventing them from fleeing or being swapped out.