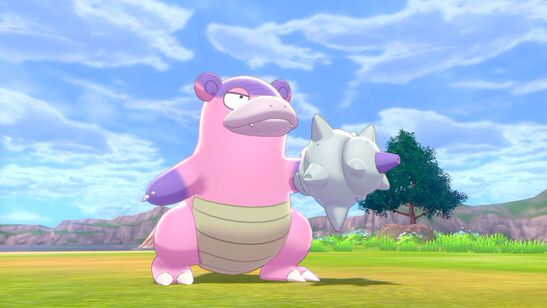 Thus, welcome back to “Who’s That Pokémon?” and this time, we’re tackling the Hermit Crab Pokémon Galarian Slowbro:

Description: A Shellder bite set off a chemical reaction with the spices inside Galarian Slowpoke’s body, causing Galarian Slowbro to gain the Poison type.

The Shellder sometimes unconsciously bites down harder on Slowbro’s arm, causing an itch that drives Slowbro to start swinging its arm around indiscriminately and smashing its surroundings. This makes Galarian Slowbro a highly dangerous Pokémon.

Although this Pokémon is normally zoned out, facing off against strong opponents activates the stimulants in its body, sending them coursing through its nervous system and delivering a jolt.

When this happens, Slowbro’s expression sharpens. With a speed that puts even the quickest reflexes to shame, Slowbro readies its Shellder and makes poisonous liquid shoot from the Shellder’s tip.

Signature Move (Shell Side Arm): Shell Side Arm is a Poison-type special move in which this Pokémon fires poisonous liquid from the tip of the Shellder attached to its arm. This move may poison the target. Moreover, it inflicts either physical or special damage depending on which will damage the target more.