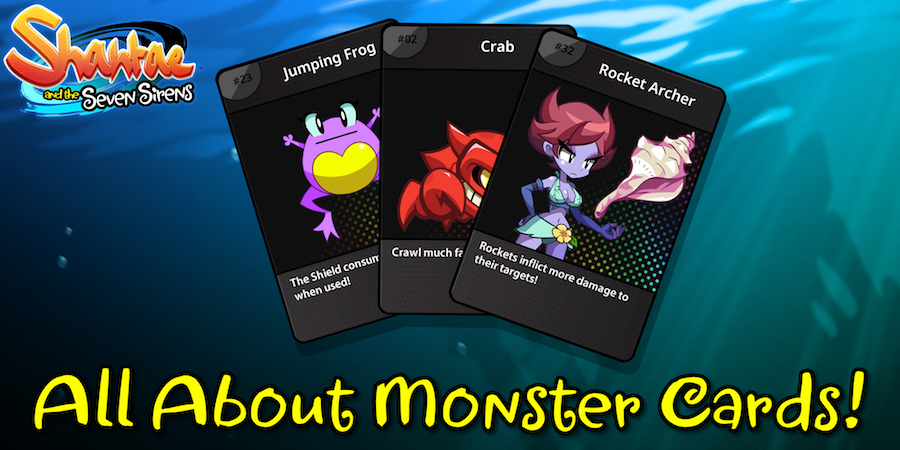 The long wait for the console and PC release of Shantae and the Seven Sirens, is almost at an end and it’s publicity, still remains a constant. As part of the promotion, WayForward has chosen to go into detail regarding another new feature for the game, Monster Cards, useful power-ups that double as collectables, with the rarest of Monster Cards requiring players to trade in golden nuggets.

The full details on Monster Cards can be seen here:

In Shantae and the Seven Sirens (scheduled to arrive on Nintendo Switch, PlayStation 4, Xbox One, and PC on May 28), Shantae is out to save her friends and uncover long-buried secrets, but she’s also aiming to collect ’em all — all the Monster Cards, that is! While our Half-Genie heroine once again has all the transformations, dances, and magic spells one would expect for navigating her latest adventure, she now also has access to a wide variety of Monster Cards — 50 in total! — to boost her abilities in a number of ways. Here’s how it works.

Above: When Shantae defeats an enemy, it may drop a Monster Card!

The first step to building up your Monster Card deck is, of course, to get your mitts on some Monster Cards. Fortunately, they can be found simply by defeating enemies — just bash a bad guy, and there’s a random chance it’ll drop a Monster Card. Each enemy type drops its own unique card, and, while Monster Cards vary in rarity, the more of an enemy you defeat the greater the chance you’ll have to obtain it.

Some cards can be equipped as soon as you have a single card of that type, but others require multiple cards; for frequently encountered enemies, you might need three or even five copies of its card before they can be equipped. Don’t worry, though — drop rates for common cards are generous, and if you get more duplicates than you need, you can sell them to Paradise Island’s local Monster Card enthusiast for extra gems.

Once you have enough cards to equip them, the real fun begins. Each type of Monster Card bestows a different effect, covering everything from enhancing Shantae’s mobility to boosting particular attributes of Shantae’s spells. The Rocket Archer card, for example, causes Shantae’s new rocket spell to inflict more damage on foes; the Lobster Jogger card attracts loot from a greater distance; and the Crystal Crab card lets Shantae smash vases simply by walking into them. Three cards can be equipped at once, allowing you to customize Shantae with a combination that focuses on a single aspect of Shantae’s abilities (say, crawling speed, climbing speed, and swimming speed) or spread them around to bolster a variety of attributes. Of course, if you want to challenge yourself, you can choose to equip no Monster Cards at all.

In addition to regular Monster Cards, there are a few extra-rare, extra-useful cards, such as the Water Lily Siren card, which increases the damage inflicted by Shantae’s hair whip. These cards aren’t dropped by enemies, but can be acquired from a certain non-playable character in exchange for golden nuggets. You’ll have to keep an eye out and search everywhere if you want to find all the nuggets and, in turn, get a complete Monster Card set! (The full set of Monster Cards is NOT required to earn 100% game completion, however.)

You can build up your Monster Card collection right now by playing Shantae and the Seven Sirens on Apple Arcade, or you can wait until May 28 when the game launches on console and PC. Better yet, if you want to obtain your own real-life Monster Cards, be sure to check out the Limited Run Games physical collector’s edition on Switch or PS4, which includes a full 50-card set (not guaranteed to enhance your IRL abilities, sorry) and will be available to order until June 14, 2020.

If you are looking for a full list of Monster Cards, be sure to check out our guide.