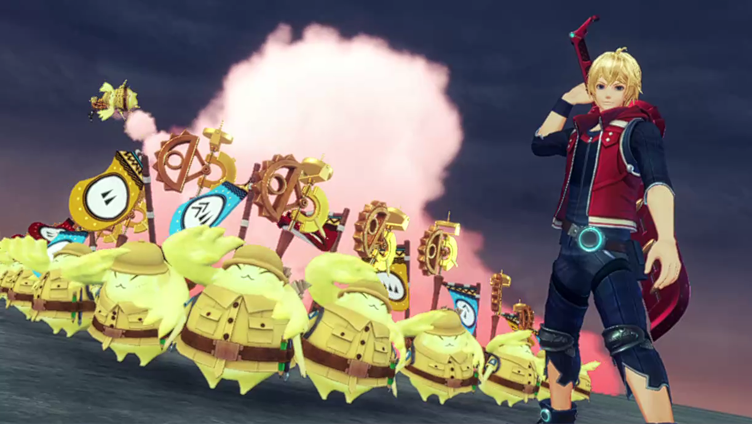 New details and screenshots for the “Future Connected” content in Xenoblade Chronicles Definitive Edition have emerged on the official Nintendo website for Japan. New Nopon characters will join Shulk on an adventure around the Left Shoulder of the Bionis in the Epilogue story “Future Connected”. There are also new enemies to fight in the form of Fog Beasts. We have gathered up the details and screenshots below.

One year has passed since the final battle. Visited is peace in the world, all races scramble the hand, it had promoted the reconstruction – such midst. Shulk suggests to Melia to visit the lost capital, Akamoto. They board the flying boat Junks and aim for the imperial capital, but suddenly they receive a mysterious bombardment. And the place where Junks crashed was a place called “Bionis shoulder”.

The stage of the adventure is “Bionis Shoulder”, which was never visited in this volume.It is on the left shoulder of the giant god and is a floating island made of suspended minerals.

Otomo, an adventure on the shoulders of giant gods, is Keno and Nene of the Nopon tribe. Even though he is still young, Keno shows the power of an adult in battle.

Keno: Longing for his father, he aims to be a “hero.” A little shy. And seems to be skilled with the ethereal rifle from his father.

Nene: A solid person instead of Keno’s mother . Contrary to her
cute appearance, she is quite the power type in battle.

In the field, like the main story, various powerful enemies are waiting for Shulk and co. Since the power of Shulk’s “future vision” has been lost, I would like to think more carefully about how to fight when facing an enemy.

A monster in black mist is called “Fog Beasts”.Not only do they have a mighty power, but their vibrations have the effect of attracting nearby enemies and forcing them to attack the Shulk and Co.

The Nopon team of surveyors from the Nopon tribe known as Noponer Rangers have scattered around the shoulders of the Bionis. If you fulfill their request, they will become friends, and to freely assist you in battle. If you cooperate with the sirukus, you will be able to use powerful special moves.