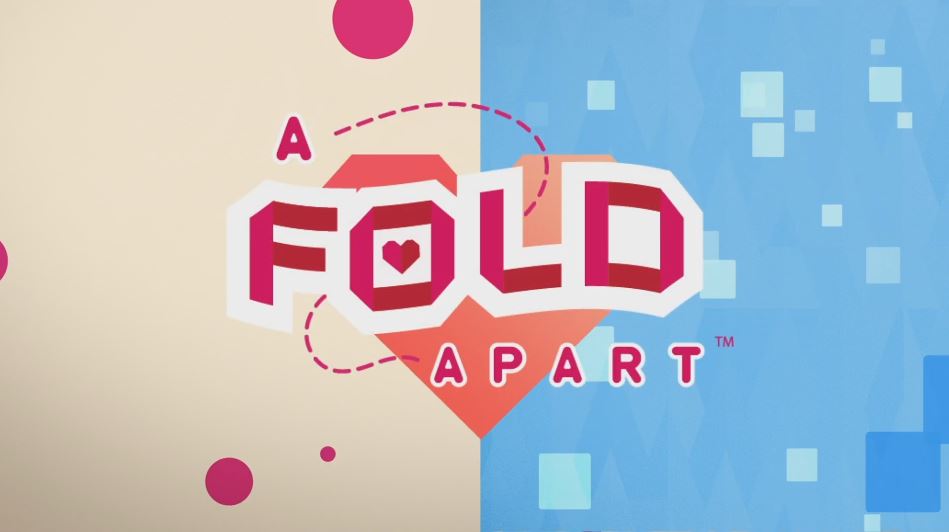 From what I could find during my research, indie darling, A Fold Apart, by Lightning Rod Games has been in development since late 2016/ early 2017 based on blog posts on their website. The small Toronto Canada-based studio is composed of former EA, Disney Interactive, UserJoy, and Ubisoft has unleashed their first multiplatform title. The game’s story is loosely based on game designer Mark Laframboise’s own personal experience with a long-distance relationship and a love of puzzles.

A Fold Apart sets off on you choosing the kind of couple you want to be, whether male/female, female/female, or male/male relationship. The characters you choose are depicted in the various chapters of the story, although the dialogue seems unchanged throughout. The story in A Fold Apart is told through on-screen conversations through text messages back and forth or larger on-screen monologue as your two romantically involved avatars try to navigate a long-distance relationship.

The story starts with one partner taking a job as an architect getting to help design a landmark building in another city in a short-term job for the better part of a year. The toll of being separated begins to affect both people and that’s where the gameplay of A Fold Apart takes center stage.

As the title suggests, folding and the idea of folding paper is a core mechanic of the game. The chapters in A Fold Apart mix between the two partners and their perspectives as they navigate their feelings and try to get back to one another. The puzzles play out in small snapshots that are like moving photos. You will need to move along a path towards a star which signifies the end of the puzzle. Along your journey, you will need to fold the ends of the photo left and right committing to your fold along with flipping the paper and folding again to align paths to the end.

Progression in the game happens at a slow but methodical pace, adding different ways to fold, i.e. top and bottom, freezing time, and rotating the paper, thus changing gravity for the characters, moving boxes, and more. As the game adds new puzzle elements it introduces you to move in multiple directions and dimensions as folding the paper and moving your character may require some out of the box thinking.

Outside of the puzzles, there are small bits where you will interact with the other character over texting. From time to time you’re given a choice with how to respond either with a snide comment or harsh reply or loving, gentle, and with understanding. It’s easy to see in these parts how developer Lightning Rod Games hopes that their game touches your heart, as well as your gaming fingers.

A Fold Apart is told through a half dozen or so chapters and over fifty puzzles. Like most puzzle games, though some of the puzzles really only require a few short seconds to solve, and if there’s one fault of the game is that it’s over very quickly. That’s not to say the game is easy, it does what it set out to do to create an emotional story with puzzle elements and that it does very well.

The game does have an inclusive approach to how you choose your storied characters, which is a welcome addition that many people will likely applaud. Being able to choose a same-sex relationship from the get-go is sure to be a point of appreciation. More games should allow you to choose your way to play that best defines who you are.

A Fold Apart is heavily reliant on its orchestral score which hems and haws at your heartstrings throughout the two-hour game. When the characters discuss their broken distant hearts it’s easy to feel the low beats in the instruments as well as the joyous tunes that carry on through to the end of the story.

The game does a great job using its music to convey the struggles of a long-distance relationship and the distant feelings one would have of loneliness and betrayal by a partner that decided to take a job that took them far away.

A Fold Apart is primarily a 2D game that uses 3D models for its characters and level design. The game’s main aesthetic is as photo papers that encompass the puzzle parts and the folding, creasing, and flipping which has enough of a 3D paperlike feel to make you really feel like you’re interacting with a piece of paper. The foreground and background of the world has a slight cell-shaded look to it and reminds me a lot of a budget Pixar or Dreamworks short film.

If there’s one place that A Fold Apart surprised me, only due to its seemingly low poly game design and slow pace, is in the performance area. The game hiccuped for me a few times when loading into a new puzzle. I also had 3-4 level ending bugs that crashed the game for me or sent me back to the beginning of a stage.

The crashes weren’t terrible in terms of time lost, as many puzzles can take just a few minutes to complete, even less if you are doing it for the second time. It was just jarring to me having a crash happen which took me out to the Switch’s home screen. I’ve communicated with the devs regarding some of the issues, so while I couldn’t recreate them, and was able to complete the game at 100%, just know that I had some crashes in my playthrough.

A Fold Apart is like a love letter to anyone that has ever been in a long-distance relationship acknowledging the strain and struggles that being a part can cause. There’s tension in every moment of the day, from missing a text or call, to being in a different time zone. The realities of this are apparent in the heartfelt way you traverse alongside the characters’ lives through to the conclusion of the game.

It won’t blow you away, but it may make you blow your nose. A Fold Apart is a touching story of two people that love each other, miss each other, and for whatever reason have a hard time communicating that to one another across a vast distance.

If A Fold Apart does anything well, it’s helping validate any of us that have been in a long-distance relationship that your feelings of loneliness, sadness, and heartbreak are real and it’s ok to hurt.