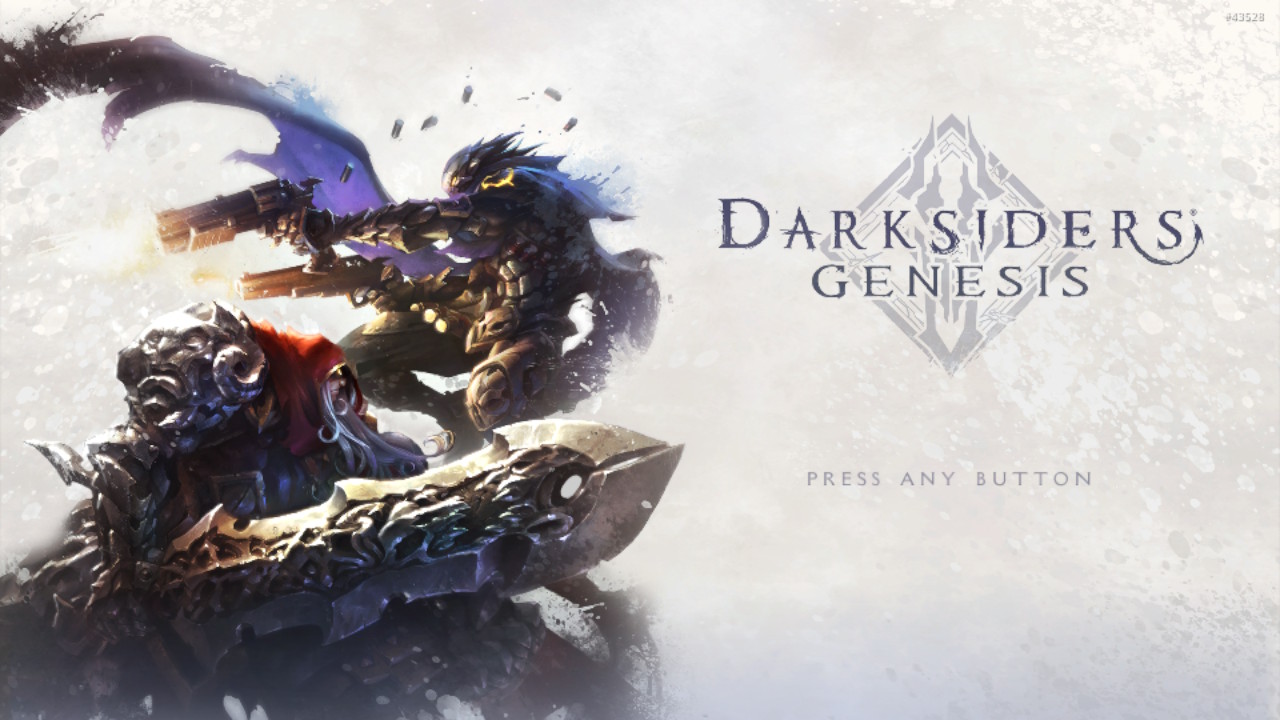 Darksiders Genesis is the fourth installment in the Darksiders video game series and features the Fourth Horseman of the apocalypse, Strife, as one of the main protagonists, alongside his brother War. Strife made an appearance in Darksiders 3 and helped his sister Fury save what remained of humanity.

Darksiders Genesis is a change in formula to the others entries in the series. Whilst it is still a third-person, hack and slash, action-adventure game, the camera angle is from a top-down perspective similar to the Diablo series as opposed to the usual “behind the character” camera angle.

The game previously released on Microsoft Window and Google Stadia on December 5th, 2019. On February 14th, 2020. Darksiders Genesis finally saw release on consoles including Nintendo Switch, Xbox One, and PS4.

Darksiders Genesis is a prequel that takes place before the events of Darksiders. The Horsemen of the Apocalypse Strife and War are summoned by the Charred Council to stop a plot concocted by Lucifer to upset the balance between Heaven and Hell. The two Horsemen set off on their steeds to investigate and put a stop to Lucifer’s plans.

Their investigation leads them to the demon Moloch and his army laying siege to Samael’s keep. Strife and War defeat the besieging demons and make an unlikely alliance with Samael to help them find and stop Lucifer. It is revealed that Lucifer has been granting unimaginable power to master demons of hell, who are in turn helping Lucifer with his plans. The Horsemen set out to pass judgment on the conspirators in an attempt to keep the all-important balance.

All of the story cutscenes are portrayed in a kind of graphic novel/comic book sort of way, as opposed to the typical cinematic cutscenes like in the other Darksiders games. I didn’t ‘not’ like the graphic novel like cutscenes. However, after seeing the kick-ass, cinematic opening cut-scene at the very beginning of the game, I was really hoping to see more in the same style.

Darksiders Genesis is a hack and slash, dungeon crawler game in a similar vein to Diablo but with its own spin. You have to tear your way through hordes of enemies, take on tough bosses whilst also navigating labyrinthine dungeons and looting chests. Darksiders gameplay elements like platforming and puzzle-solving are integrated into each of dungeons. Players are encouraged to explore every nook and cranny to find chests that include key items and skills that will aid them in their quest.

Both Strife and War have their own styles of attack. War gets up close to his enemies and swings around his mighty blade, the Chaoseater. Strife, on the other hand, can attack in close quarters and from a distance with his dual pistols. Both of them can find items that are exclusive to them and can be used to solve puzzles or uncover hidden chests, collectibles and passages.

Darksiders Genesis can be played solo or cooperatively. When playing solo, players can swap between Strife and War whenever they want with the press of a button. There are puzzles that require players to swap between both characters in order to use their unique skills. Should the player be killed as the character they are playing, they will be immediately changed into the other character and must stay alive long enough for the first character to be revived. Failing to do so will mean defeat and the players will have to be restart from the previous checkpoint.

In Co-op play, two players can play together with one player as Strife and the other as War. You can’t change between the characters and will have to rely on each other to make it through each dungeon. Should one of the players fall in combat, they can be revived if the other player can reach them in time. This will leave whoever is playing medic vulnerable, as they cannot attack whilst healing their comrade.

Players can team up in local split-screen multiplayer on the same console or online. In split-screen multiplayer, the screen is divided vertically with both players having their own HUD. To play online, players can set up rooms or join others. Online play can be tricky though, as communication between players is not available in-game and may require a third party voice chat app.

Each dungeon has a set of quests/objectives that can help guide the player(s) to get through them. Completing the quests can reward you with creature cores, souls, and Boatsman coins that act as a type of currency. They can be used to purchase combo skills, expand on Potions and other things that are available from the demon merchants Vulgrim and Dis. Souls and Boatsman coins can also be acquired throughout dungeons and the void. Souls can be found in chests, Soul orbs, or defeating enemies. Boatsman coins are scattered in numerous locations in each map, usually suspended on ledges that require a little prowess to get them.

The main story campaign of Darksiders Genesis consists of seventeen levels, of which four of them are boss battles. After beating the fourth dungeon or so, the Arena Mode will become available. The player will be pitted against waves upon waves of enemies wipe them all out. You can earn Arena points from beating the Arenas and use them to purchase awards including new skins for War and Strife.

When not traipsing through dungeons or fighting hordes in the Arena, you will find yourself in the hub world known as the Void. It is here where you can meet up with the merchants Vulgrim and Dis to purchase items and upgrades from them. There are also areas in the Void to explore with their own little secrets and challenges, some more demanding than others.

As you defeat enemies, some will drop creature orbs. When collected, you can add them to a skill tree to receive perks like an increase in health or strength, resistance to certain attacks and other tweaks. The skill tree benefits both Strife and War and can raise their power level. The power level serves as a guide to how strong you should be before playing a particular dungeon. Every dungeon has a power level and can be a struggle to fight through should you not have the recommended power level. Learning new moves and bolstering their effectiveness can also help raise each character’s power rating individually.

The difficulty setting can be a blessing for those who find Darksiders Genesis a little too tough or prefer to up the ante. Players can change the difficulty at any time when selecting a dungeon to play through. All previous dungeons will be readily accessible upon beating them the first time around. This allows players to return to find loot that they missed on their first trip or required a key item to access them like the power Gauntlets to smash through tough crystals.

Throughout each dungeon, there are a number of features to help with exploration and preparation. There is a map in every dungeon, that while it is not required to find the end of the level, it can help point out every area of the dungeon, chests, and collectibles. There are also a number of obelisks dotted around the dungeons. They grant access to the merchants and enable or disable Co-op play. It’s a handy feature for those who want to spend their hard-earned souls to upgrade themselves or call in a friend before taking on some tough big bads.

In some dungeons, especially in larger or outside areas, Strife and War can summon their horses to help get to where they need to go quicker. They can also fight on horseback though they are limited to what they can do and can be knocked off their steeds by an enemy’s attack. Players will also be able to unlock Strife and War’s Chaos Form later on in the game. Once the Chaos meter is full for that particular character, they can wreak heavy damage whilst being temporarily invincible.

The audio is as good as ever for a Darksiders game with epic background music and gruesome sound effects. The game features narration and voice work throughout which, helps give personality to the characters during the comic book cut-scenes and add banter between War and Strife during their time together on their investigation.

The voice actors for War, Samael, and Vulgrim all make a return. Strife on the other hand, though he makes an appearance in Darksiders 3 and was voiced by Darksiders VA veteran Phil LaMarr, a new voice actor takes the mantle for the Nephilim gunslinger this time around.

I enjoyed the interactions between War and Strife and found them amusing. War is quite hard-edged and a “by the letter” kind of guy. Strife is more nonchalant and witty, much like any buddy duo we have seen in film and TV.

The gameplay is entertaining and the audio helps set the tone but the visuals are a little lacking somewhat. From the set camera distance, everything looks relatively clear and sharp. On closer inspection however, the character models are not of as high resolution as they could be and I don’t think it is due to the limitations of the Nintendo Switch.

I would have preferred to be much closer in to the action and see Strife kick some demon hide in HD. On the other hand, everything else, like the menus and displays are clear and easy enough to read on the TV. When it comes to handheld mode, the text is a little on the small side and blurry around the edges.

Performance isn’t flawless but Darksiders Genesis does run incredibly on the Switch. There are a couple of frame skips here and there but the Switch does well to run split-screen multiplayer without making sacrifices to the visuals. The visual effects also look really good from the electric bolts darting through the enemies to the particle effects of dust being blown across the screen

Darksiders Genesis is an interesting entry in the series but maybe not one that hardcore fans of the series may like very much. It has the characters, lore, and charm of the series but by being a top-down, dungeon crawler and looter, it doesn’t feel as immersive as the other games.

I enjoy the different play styles of each character. They both have some key items or weapons that the other doesn’t. It makes them feel unique and essential, as you need them both in order to conquer the trials that lay before you. Even though it may have been practical for both characters to have been equal to each other, those playing with the characters wouldn’t need to work together to solve the game’s puzzles and would defeat the object of the game being a co-op dungeon crawler.

I do wish that the platforming elements were a bit more forgiving though. The top-down isometric camera angle makes it extremely difficult to judge distances. While it is not paramount to the main story campaign, getting through some of the secret areas in the Void are quite a nuisance and not very enjoyable. Especially after wasting hours in trying to successfully, navigate your way over the narrowest of platforms,

Enjoyed best with a friend though it can be played in its entirety alone, Darksiders Genesis is a nice little spin-off that tries to do something different with the Darksiders formula. Its not a Diablo clone but what Diablo wishes it could be.