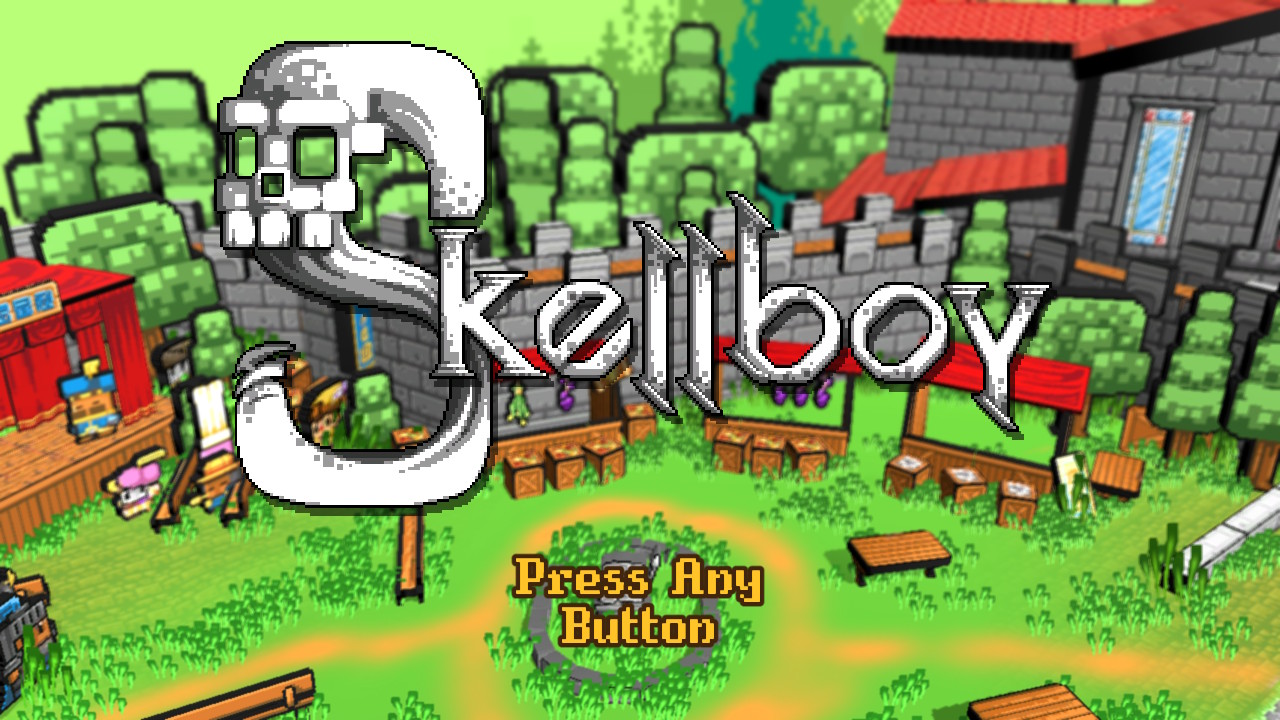 Skellboy had its first reveal back in 2019 for the Nintendo Switch. The game was demoed at various press events throughout the year. Originally planned for release back in December, Skellboy had a short delay and is now available on the system as of January 30th, 2020.

Having woken up in the Cubold Kingdom, you soon discover that things are not what they seem. You are a boy made out of bones who seemingly, has accidentally been summoned from the afterlife as the game’s ancient hero Skippy!

Things are not what they seem in the Cubold Kingdom though. The Princess has dumped the King’s Court magician and he has vowed to take revenge on the land. Now with your new resurrected body, you must travel across the Kingdom of Cubold slaying monsters to take back the kingdom before it’s too late!

Skellboy is an action-adventure, role-playing game with platforming elements. Players take on the role of Skippy. Skippy has the ability to use body parts & weapons from the enemies he kills to increase his arsenal of weaponry and decorative body parts.

Monsters will often drop a head, torso, or shoes and these body parts can be interchanged for different abilities, additional health, protection, and more. As you progress the Cubold Kingdom you’ll come across various environments and areas that each offer their own unique boss fight.

Skellboy has a lot to offer when it comes to its Content & Features. The beautifully rendered world known as the Cubold Kingdom is full of various locals, boss fights, and a cast of creative yet humorous characters.

Skippy has his own personal arsenal of unique monster parts and a variety of different weapon options he can equip. With these weapons, comes the ability to freely exchange between four different types of weapons depending on what the situation requires. From a simple sword to something as simple as a pencil, Skippy will always have the right tool for the job when it comes to defeating the evil.

Another feature known as the crypt will unlock once you’ve progressed the story far enough. Here, you’ll be able to freely swap body parts and weapons that you have unlocked throughout you’re journey.

Before I begin I’d just like to say that the audio was one of my personal high points for Skellboy. The Cubold kingdom was brought to life via the game’s fully unique music, sounds, and atmosphere. Each location within the game was paired well with the soundtrack and conveyed the game’s overall setting and theme fairly well.

The visuals of the Cubold kingdom are vibrant and full of color, from the depths of the sewers, all the way to the interiors of many of the locations. Many may even compare the visuals of Skellboy to the likes of Paper Mario, and they wouldn’t be wrong in doing so!

The performance in Skellboy did come with its hitches though. We reviewed the game primarily in handheld mode, and performance dips we’re apparent when loading into new areas, or in areas where there were a lot of actions being displayed on the screen at once. We did go back in while playing docked and it seemed as many of these issues came strictly from playing the game in handheld.

Skellboy was a game that I’ve been wanting to play for a while, it looked interesting and was something that caught my eye the minute it was announced. Having now played the game, I can very much conclude that it was definitely worth the wait. From the game’s premise of swapping and equipping different body parts, slaying enemies for said body parts, the overall charm was there from the beginning.

Skellboy did have its minor flaws though at the start. Performance issues that we mentioned above and a couple bugs that later got addressed in the game’s patch (Version 1.0.1) did hinder Skellboy from becoming a flawless game before the patch. Having gone back with the patch installed the game has fixed many of the bugs I’ve encountered and performance has been improved. Continued support for this game has been confirmed and the development team behind the game has been very supportive regarding feedback.

If you’re looking for a Paper Mario esque game then look no further then Skellboy! Its fun unique gameplay twists and humorous dialog is not to be missed in this grand adventure through the Cubold kingdom with Skippy at your side!

*A Digital code was provided by the Publisher for the purposes of this review.