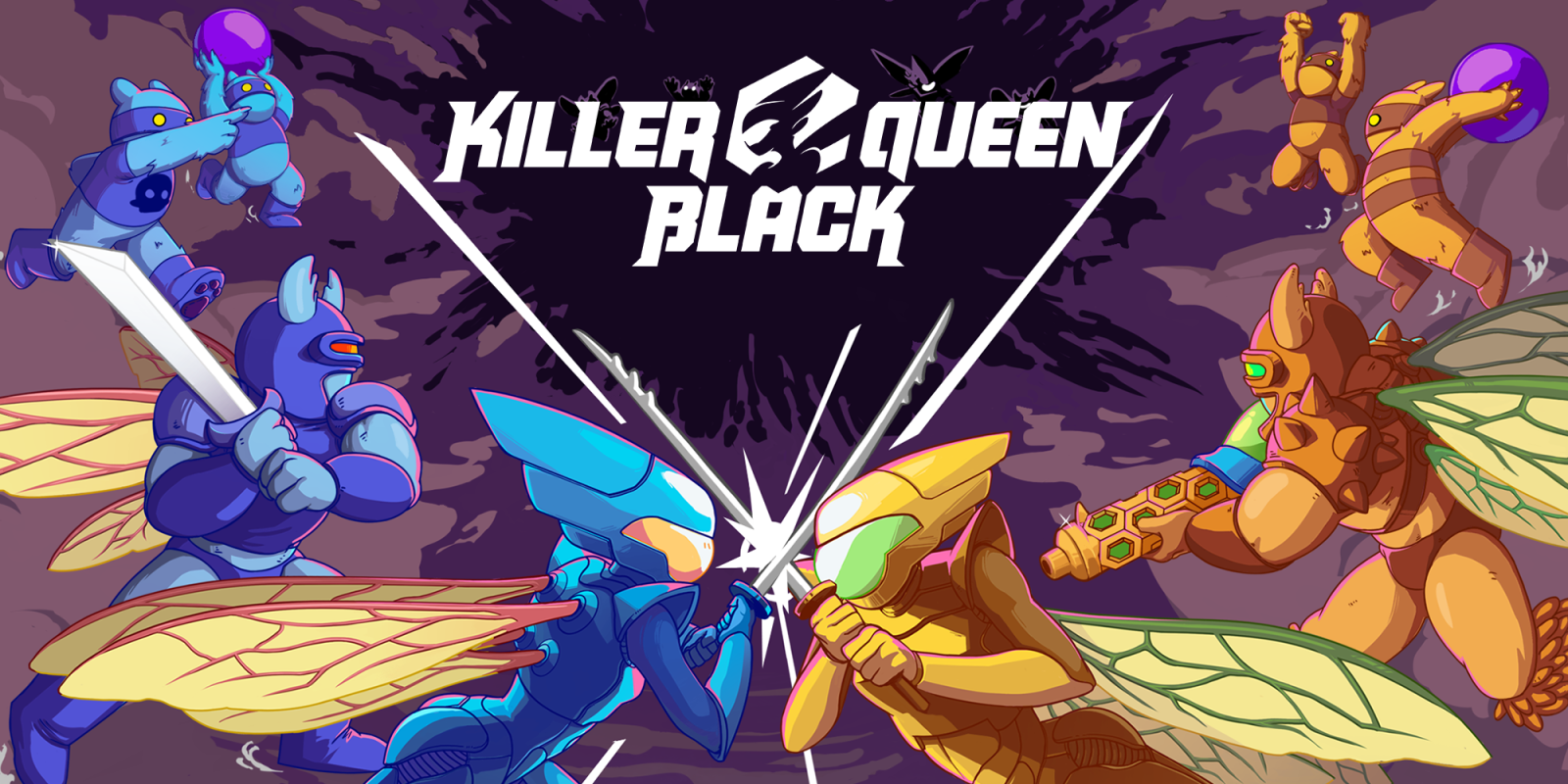 Killer Queen Black is actually a rework of the arcade game of the same name, “Killer Queen”, that came out in 2013 and was exhibited for the first time at the New-York University’s fourth annual “No Quarter” exhibition. It was a multi-player strategy platform game and was the only arcade game where up to ten players were able to fight against each other.

It had such a strong fan base that most were willing to travel the nation just to play it (you could only play it at the arcade, no online). There were more than 40 locations where you could challenge others. Fans even started hosting tournaments, league nights and also online groups.

There is no story per se, but if we had to resume the situation I’d say that it is a good ol’ traditional face-off between enemy factions. On one side we have the Blue Hive and on the other side we have the Gold Hive, both waging war for territory. The rest is up to you, the winners always write history!

The mechanics of the game haven’t changed from the arcade version and are really simple and easy to learn. The game even includes a nice tutorial that runs you through everything you need to know. You have essentially three ways of grabbing the victory: Military Victory, Economic Victory or Snail Victory.

Military Victory involves killing the enemy Queen three times. Indeed, while the Queen is very powerful and fast, she only has three lives. She can attack by thrusting her sword on the sides or by falling down on her enemies with her piercing attack. But like the other attackers, her attack has some end lag so be careful when using her.

Snail Victory is hilarious and a wild bet! At the center of each map, there is a snail waiting for someone to ride it to victory. Obviously, the snail is really slow so you have to either snatch it away when no one is paying attention or have a fighting soldier protect you while you’re riding it. Get to the other side of the map and the battle is over!

There are a few differences from the arcade version. First of all, the number of players has been reduced from ten to eight players maximum. This is a welcome change since it will lessen the mental charge and help you focus on what’s going on during a battle. Since the fights are intense and quite chaotic, this was a good call.

The biggest change obviously is that you’re now able to face off against people online. What’s more, Killer Queen Black is cross-platform, meaning console players can battle against PC players. This also makes it a lot easier to find challengers online.

Fret not, you can also play multiplayer modes in local with your friends. Up to 4 players can register on a Switch and if you want to do a 4 vs 4 then you can pair up two Switch consoles and you are good to go.

If you’re not in the mood for a battle, there is also a “Spectate” option available in the home menu. A nice feature if you want to learn new strategies while observing global players fight against each other.

Lastly, since it’s a competitive game we should not forget about the rankings. There’s a Leaderboard next to the player overview and there you can check how you fared against your friends, in your league online or see who’s in the top 100. A neat little secret: the top-ranked team will unlock a special skin and will receive the title of “Black Team”.

One of the highlights of the game is definitely the soundtrack. With a mix of guitar riffs and drums, you quickly get into the mood for these bug clashes. The guitar adds intensity to every battle and you’ll feel like a war-god before you know it. The band behind the OST, called Powerglove (named after the NES controller accessory), is an American instrumental power metal cover band.

There is only one song available though, so it would definitely help getting a bunch of others to beef up a little bit the audio. Still, the current one will get you plenty pumped up and Retro 8-bit sounds are also mixed in with each attack to remind you of the arcade origins of the game.

The visuals have been reworked and are just gorgeous! The colors vibrate and give off this pleasant feeling, like if you were in an 80’s retro-synth wave music video clip. Each attack or dying effect catches the eye and keeps it entertaining. The Maps are all different and each has its own background. They also call for different strategies since the layout is different (up to 6 maps).

The online performance is really good. I never experienced any lag or didn’t even have to wait too long before finding opponents. This made the online experience really enjoyable. In a multiplayer video game, this might be one of the main concerns of potential players. Fortunately, this is well handled.

My main complaint about KQB would be the lack of solo content. I wish there was something to do aside from playing online, even if it was something short. Maybe a solo campaign, challenges… Hopefully, something gets added in a future update, along with new maps and weapons.

Another issue would be that the game is not meant to be played for hours alone. Don’t get me wrong, I’ve had a lot of fun playing online, but after some time I felt just a tad tired of playing. Granted, I’ve only played the game solo so I’m expecting this to be a lot more hype when playing with friends.

At the time of writing this review, a new update came out called “Update Hydra”. The main change is that you can now play locally with 8 players on a single Switch, which I am sure will please a lot of the players. A few other changes were brought along that will make the online experience more smooth for everyone (region selection, streamer mode, …).

Killer Queen Black is the success story of an arcade game coming to the Switch. It quickly pulls you in and keeps you coming back for more fast-paced bug gauntlets. It’s exciting, beautiful and I can’t wait to see what’s in store for them in the future.