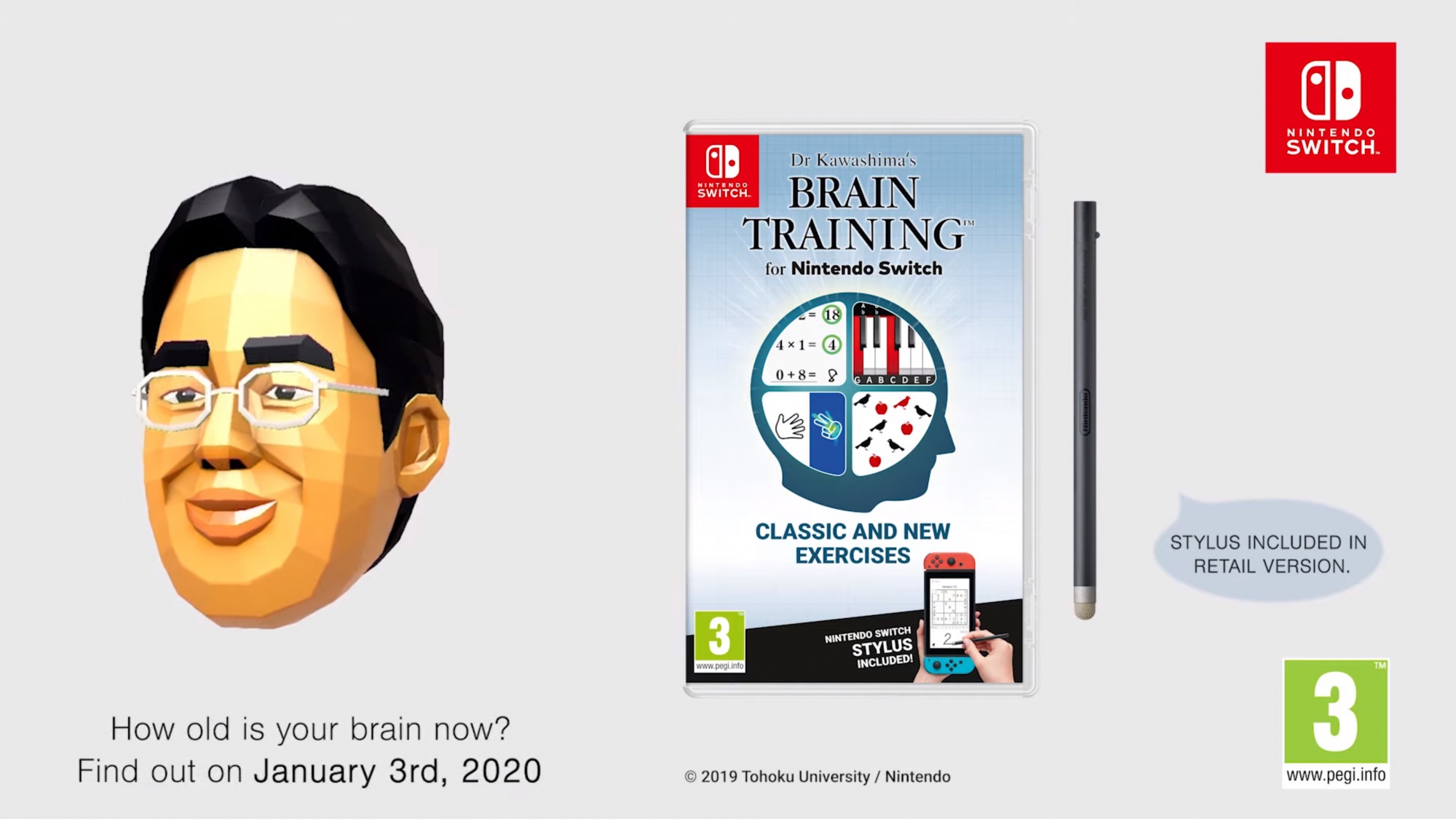 Dr Kawashima’s Brain Training: How Old Is Your Brain? First released on the Nintendo DS in Europe back in 2006. It featured famed Neuroscientist Dr. Ryuta Kawashima of the Tohoku University in Japan. The premise of the game was to test and train your brain with a series of exercises like memory games and puzzles.

It has been several years since the last installment in the series released on the Nintendo 3DS as Dr. Kawashima’s Devilish Brain Training: Can You Stay Focused? In Europe back in 2017 and Brain Age: Concentration Training in the US (2013) and Japan (2012). The latest entry in the series brings some new and classic mini-games to the Nintendo Switch and aims to encourage Switch owners to get the old grey matter into shape.

Dr. Kawashima’s Brain Training For Nintendo Switch introduces players to Dr. Ryuta Kawashima. He is a real-life Japanese Neuroscientist who has made a career out of studying brains and how they work. The game introduces the player to Dr. Kawashima who has the player try to solve a series of puzzles and minigames that help stimulate different parts of the brain.

The idea of these activities is to improve your mental ability of problem-solving and help combat the effects of natural aging of the brain. Dr. Kawashima serves as a guide and a tutor, teaching you what you must do for each activity and what part of the brain can be stimulated by it.

Most of the activities in Dr. Kawashima’s Brain Training For Nintendo Switch require the player to solve puzzles by using the Switch’s touchscreen. This can be either selecting the highest number, solving equations, playing the piano or writing out words. For those that picked up the physical copy of the game, they would have also received a stylus which, can make touchscreen inputs much easier.

There are three game modes for players to indulge in; Quick Play, Training and Brain Age Check. In Quick Play, players have access to 6 minigames of which three of them can be played with two players, each with a single Joy-Con. The other three make use of the right Joy-Con’s Infra-Red Camera to read hand gestures.

In Training, players can take part in any of the activities they have previously unlocked by collecting enough stamps. To get stamps, of course, you are rewarded them after playing any activities they have already unlocked and by participating in the daily Brain Age Check. Only your first results of the day are saved on a chart so even if you play the activity again to get a better result, it will not be added to the chart but it will get added to your personal records.

In Brain Age Check, you will partake in three different exercises to calculate your theoretical brain age. All the exercises were tested on a group of people aged between 20 and 79 to provide a hypothesized score corresponding with your own result in the Brain Age Check. The three exercises consist of Self-Control, Processing Speed and Short-Term Memory.

Depending on how quickly you can do each exercise correctly, the ending result will give you an approximate brain age between 20 and 80. As with the Training activities, only your first results for the day will be recorded. Any repeat tries will not be saved regardless of whether you have improved your Brain Age result.

As regards content, there are about 12 exercises in total with some of them having extra levels of difficulty like Germ Buster or Sudoku. The Masterpiece Recital has a selection of music pieces that will have players tapping the keys on the screen in time with the music. New music scores are available once a day and players can replay any other song after their first training session of Masterpiece Recital of the day.

Germ Buster is a Dr. Mario style game complete with viruses, multi-colored pills and the theme music to boot. This minigame was introduced back in Dr. Kawashima’s Brain Training 2: More Training In Minutes A Day! on the Nintendo DS and is meant to help relax the brain. I must say that I find that it exhausts the brain more than relaxes it as I get frustrated when I mess up and eventually lose.

Most of the exercises require the player to hold the Switch in Portrait mode and use either their finger or Stylus to draw letters or numbers onto the screen. When setting up your profile, players will also be given the option to choose whether to play Left or Right Handed, which is very handy for me seeing as I am in fact left-handed.

There are about three exercises that use the IR camera on the right Joy-Con to read hand gestures. The exercises consist of playing Rock, Paper, Scissors, repeating the hand gestures shown on screen or using your fingers to work out sums. It is a nice touch but more often or not, you can fuddle your way through making various hand gestures which the game will eventually read and pass you on to the next gesture.

Players can check their general progress in their profile by clicking on their name in the top right corner. Here you will see what your best recorded results are in each of the training exercises, as well as your Brain Age Check records for each exercise. It also counts the number of times you achieved Rocket Speed, Flying Speed and Train Speed in certain exercises.

Another feature that is coming to the game sometime in February is the Brain Training World Championship. It will supposedly allow players to share their scores with each other online and see who is the smartest out of you all when competing in the championships. I will hopefully be able to go more in-depth with this mode as soon as it is available.

In the Settings, players can choose to set an alarm to let them know it is time to do some brain training. They can also design their own Stamps, choose how the calendar is displayed, share rankings, choose their dominant hand, etc. You can even access the credits from this screen as well so you can see all the talented people that created the game.

Dr. Kawashima’s Brain Training For Nintendo Switch is focused more on visual exercises rather than acoustic ones. That’s not to say that there is no audio at all. On the contrary, The Masterpiece Recital exercise has you playing songs including classical numbers like Beethoven’s An die Freude aus der Symphonie Nr. 9 and Nintendo’s own tunes like Fever and Chill from Dr. Mario.

Other exercises, however, do not have music in the background at all. Instead, there are sound effects for when you have answered correctly or incorrectly. At the end of an exercise, you may be greeted with an animation depicting your speediness like a bicycle squeaking along, a train chugging past or a Rocket Ship whooshing into space accompanied by the respective sounds you would expect them to make.

The visuals are very pleasing for this game though for the most part, they are rather simplistic. Numbers and text are easy to read and are presented on a simple white background. The images some minigames are pleasant and well presented but there is nothing that is truly demanding or making the Switch work hard to in order to process these visuals.

The performance is solid with almost no jutting or lag, and loading times are virtually non-existent. You can jump between activities within moments and can easily come out them by pressing the – or + buttons. The input response times are also extremely quick if your scrawl is easily readable. Those that have messier handwriting will struggle in the beginning until they can improve their scribble.

As much as I would prefer to not tear into this game, there are noticeable issues that do need to be addressed. Most notably is the game’s incapability to interpret certain letters and numbers written on the screen. The number five and nine can be surprisingly difficult to register unless written a particular way. The letter Y can also prove a challenge at times, that it can take several tries to “write” it correctly.

The game could have done with a way to register a player’s handwriting beforehand, at least for certain characters like 9’s and 5’s. If you accidentally scrawl on the screen whilst trying to write a number or letter, you have to delete it before you can try again. This can cost valuable seconds and end up with you receiving a worse score than you actually should have got.

The exercises themselves are not overly difficult though there are one or two that can be particularly tough like the Word Memory Test and the Memorise 5 X 5 Test. The real challenge is the speed in which you must complete the exercises. Any tiny mistake or pause costs you immensely and affects your recorded results. The Calculations X 25 is extremely unforgiving as you fight your own nerves to work out each sum and write the answers as quickly as possible.

As much as I enjoy the 50 different music pieces in Masterpiece Recital, the Germ Buster relaxation game and the 60+ rounds of Sudoku, there isn’t a huge variety in exercises. After the time it takes to unlock them all, you won’t be spending too long playing them, though you may come back to them every now and again just to improve your score. Some more exercises would have been appreciated but there is always the possibility that more will be added via updates and DLC at a later date.

There is another thing that niggles me with a couple of the exercises that require you to read out paragraphs of text or count to 120 as quickly as you can. The Nintendo Switch doesn’t have an in-built microphone so it can’t actually register if you are reading out loud or not. This means that the game can only surmise if you read out loud and only calculate your brain age by how quickly you hit the “finish” button.

As much as I do enjoy playing the exercises in the game on my Nintendo Switch, it will be a difficult sell to others in this day and age with so many mobile apps providing a similar experience on smart devices, and in most cases, free. As much as I love to support developers and Nintendo games, I find that Dr. Kawashima’s Brain Training For Nintendo Switch may not offer enough to compete with other games and software on the market, including those on the Nintendo Switch itself

Dr. Kawashima’s Brain Training For Nintendo Switch is a decent enough entry into the series and makes use of the console’s features and gimmicks. However, there is plenty of tough competition around that might provide a similar experience at a more economical price.