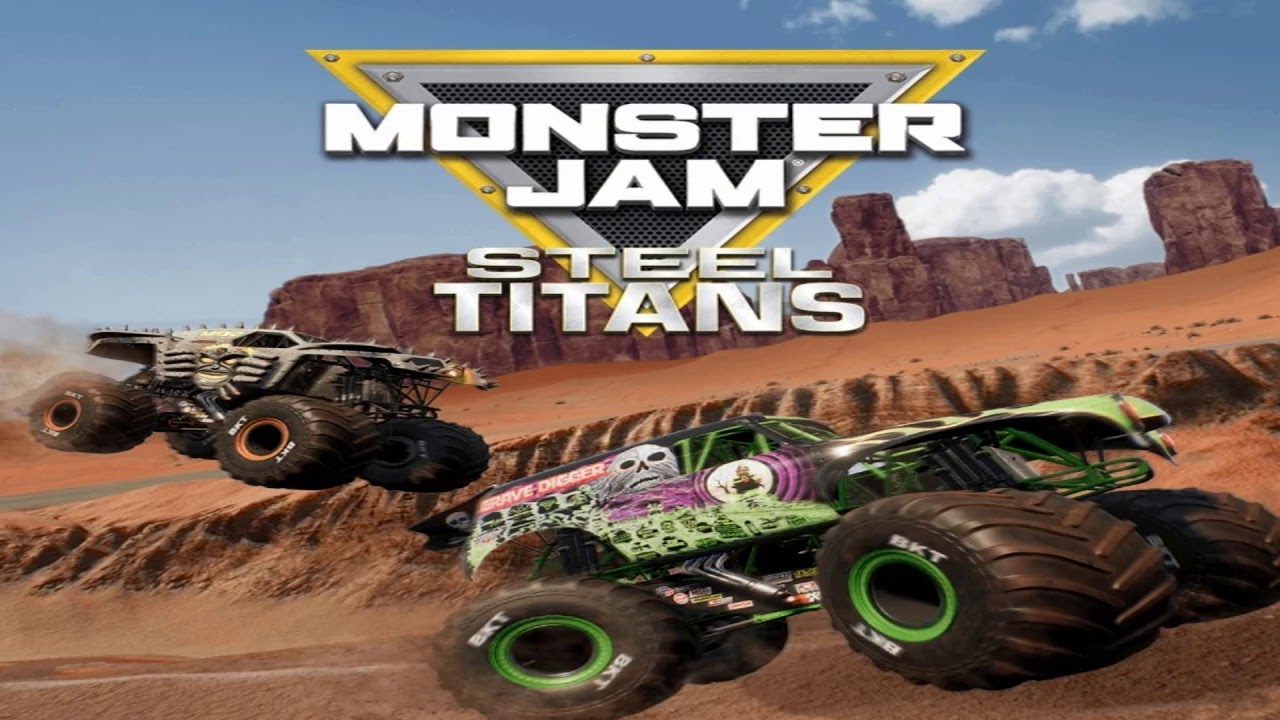 Monster Jam Steel Titans came out mid-year of 2019 for Xbox, Windows, and Playstation and has finally made its way unto the Nintendo Switch in November of 2019. The game received mediocre fanfare though it is rated slightly higher than average. Seeing the game on Switch in a genre that is only now starting to gain some traction (sorry, not sorry) though taking a dive into the racing Monster Truck scene is a welcome thing.

There’s not really a story here like some racing games try to tie into. The main campaign has you moving through events. You have a trainer in the tutorial but aside from that you don’t experience any kind of rags to riches or down-on-your-luck, just-got-out-of-prison, running-from-the-law type story like other racing games lean into. It’s just you and a few bits of competition, a gas and brake pedal, a steering wheel, and the open road.

There are various game modes in Monster Jam Steel Titans from 1v1 races, point accumulating stunt matches, multiple racer events and more. The variety in gameplay modes is impressive. You control your truck from either a third-person or cockpit view. I found in 1v1 races cockpit view was fun, though in races with more competitors viewing the race from outside your vehicle made it easier to shunt or cut off opponents from getting the checkered flag.

The game does start you off with a pretty long tutorial in which you learn some of the basic maneuvers as well as stunt moves like front and backflips or driving on just two wheels. During races and stunt matches, you can gain points and credits for doing a variety of moves so I do recommend the tutorial mode.

Once you are ready to race, you can enter into ever more complex and difficult races that will test your ability to bound over hills and rip through the countryside while chasing that next checkpoint. Some races include multiple laps as well so being consistent and steady in your driving and turning will usually award you a top spot. The real draw in Steel Titans is driving the monster trucks which can be unyielding at first as they bop up and down and have a bit of looseness to them around corners. Learning how to manage your gas and brake are key; though somewhat more difficult by the Switch’s lack of analog-style triggers for gas and brake.

There are tons of trucks and parts to unlock as you move your way through the grind that is the main campaign. As you level up and score higher in your races you will earn credits that can be used to better your vehicle’s performance and help you to score higher in your next set of races. Steel Titans also has a lot of trucks to unlock and doing so will bring back some great childhood memories if you ever witness a race or destruction like derby growing up.

Events come in a variety of races and arena style point matches. The visual variety and length of each race are varied, though I did feel like after a few circuits I had seen pretty much all the game had to offer in terms of race types and tracks.

Opponents are smart in Monster Jam Steel Titan, especially if you play on a higher difficulty level. Getting good at timing your jumps and whether to lay in on the gas or coast or even power sliding is key to victory and will challenge even the best of racing game veterans. Along with the Freeplay areas, you will find tokens that help to gain credits which can also be applied to your unlockables.

If there is one area the game lacks in it is in its boring soundtrack and lackluster vehicle sounds. There’s not much difference in my opinion to the sounds each truck makes. Tuning is very limited and also doesn’t seem to have that much effect on the overall sound quality or sounds in general that come out of your monster truck.

Monster Jam Steel Titans doesn’t stray too far in the realm of graphics for its world and tracks with which you will spend most of your time on. The ground looks already rutted and torn through so there is a lack of immersion when it comes to racing physics. It would be great if the implemented a mud system like MudRunners American Wilds where the ground actually moves around your tires as you dig into the track.

The trees and landscape are serviceable and detailed enough though close up the textures are bland and basic. But since you are usually moving at a fast pace, the lower detailed backgrounds don’t do much to distract from the overall performance or experience.

Speaking of performance, Monster Jam seems to hold its own pretty steady at 30fps. There was only a time or two when myself and six or so other trucks were barreling forward that I noticed some hitching in the frame rate. But all in all, it wasn’t worrisome or game-breaking. Sometimes going in and out of menus seemed to take a bit of time and loading for races can seem longer than it should. Overall though the pace in which you can jump in a race is pretty quick and the menu system is big and in your face, so finding races is easy as well.

One thing to mention visually, the game retains all of the looks and feel of the trucks in that they are licensed and look great on the big screen. The detailed pieces and paint jobs on each body help to immerse any fan of monster trucks. As you take damage you will start to see your undercarriage and steel frame which is a nice added bonus.

The game does a few things very well, like decent renderings of trucks, variety in tracks and race types, and being the first to the monster truck genre of racing games. However, there are loads of places the game can improve on in the next iteration, which I hope is in the works as this is truly a game genre that lacks any competition, at least on the Switch.

There’s a lot of fun to be had in Monster Jam Steel Titans. If you like racing and monster trucks you will have fun. The game is more arcade-y in nature but that shouldn’t deter those racing aficionados from picking up a decent game that will give you some hours of fun on the dirt track.