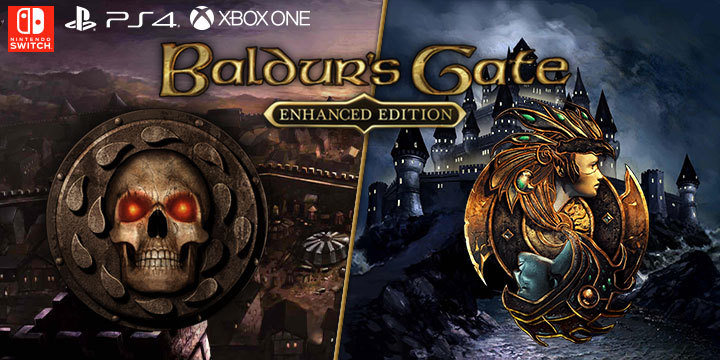 Dungeons & Dragons, one of the most coveted and well-known RPGs of all time, created in 1974 was the turning point of how RPGs are perceived and played in the modern era. It’s clear that the video-game genre of action RPGs are heavily influenced by D&D, as its mechanics and features are simple and effective yet have layers of depth that accustoms itself to those looking for a more serious and deep nature to their gaming.

In 1998, Bioware, now well known for its hugely successful franchises Dead Space and Mass Effect, were approached by Wizards of the Coast to create a truly spiritual connection to D&D in video-game form. Through this, four games eventually released on PC using mechanics and rules from the then in use Advanced Dungeons & Dragons game. After decades of being released, Baldur’s Gate and its sequel are often regarded as some of the best RPG video-games ever made, retaining its status as a cult classic.

Now, with Beamdog’s incredible port work for a game built entirely for mouse and keyboard play, the incredible setting and immersion of Baldur’s Gate gets to shine on-the-go with its port of the Enhanced Editions for Nintendo Switch.

Before getting into the nitty-gritty of the story, it needs to be known that the story of Baldur’s Gate heavily relies on the player having to experience it for themselves. Shaping the story and their characters through memorable side quests and the multiple included expansions for both games is how the audience is best given that unique sense of immersion that D&D has always seemed to offer. Another thing is that the game is extremely story-heavy. Most of your time, aside from exploring the massive open worlds, there will be dialogue, exposition and mostly reading. If these types of RPGs aren’t the ones that tickle your fancy, then you probably won’t be drawn to what seems to be a massive visual playable novel – keep in mind, though, that Bioware are masters in storytelling and Baldur’s Gate 1 & 2 are no exception.

From the beginning of your journey in Candlekeep, the journey throughout Baldur’s Gate takes you through many memorable areas – meeting characters (that may I add have remarkable voice acting, especially for 1998) and of course crawling through sprawling dungeons in hope to find the source of the iron shortage and to unravel the mystery of your royal lineage and eventually bridge off into the events of the expansions and the sequel Baldur’s Gate II. BG1 takes your character from level 1-10 and BG2 takes your character the final stretch through to level 20. It’s the sheer depth and immersion of the stories that you personally get to experience however you want that draws players back to relieve the hundreds of hours of story that birthed Bioware’s signature mechanics.

Complementary to Baldur’s Gate 1 & 2’s story is it’s now familiar gameplay. Games like Pillars of Eternity and Divinity: Original Sin build upon these game’s mechanics, but these games were the first and that is really clear through the beginner unfriendly menus and the reliance on stats and very specific gameplay mechanics that even the most veteran of gamers might not get their heads around until 50 hours into the game.

It’s this roadblock of confusing mechanics, especially paired with the fact that BG1&2 utilize 1998’s Advanced D&D mechanics and not the newer, refined experiences offered by D&D 5th Edition that made playing the game feel more like trying to figure out how to fly an airplane build 20 years ago with no experience.

There’s a lot of stuff to remember, and having a tutorial that only really teaches you the basics with walls of texts and no practical hands-on demonstrations does not help in the slightest. It’s clear through playing both games that these games really were ported for those that were already experienced with the franchise.

Aside from its cumbersome controls and mind-bending mechanics that could only be properly understood by going through external guides, the gameplay loop of BG1&2 offers a satisfying and rewarding journey. You get given a quest, you explore the open world for the area with the hints you’ve been offered and then usually have to partake in combat against enemies, defeating them allows you to upgrade your equipment and skills and once completed you level up and have access to more gameplay features. As you play the game you really feel a sense of growth, not only in your main character, but also your team. Making decisions about who to recruit and who to abandon can really be left up to an emotional debate.

If you’ve ever wanted to play a game of D&D by yourself, BG1&2 satisfies that to an extent. While the mechanics and features are mostly taken from the older versions of D&D, meaning classes, combat and spells are treated completely different to anything D&D 5E or 3E have to offer, the overall feel, atmosphere and sheer amount of content satisfies that need.

There is a whole host of content to explore in the bundle. Hundreds of hours of gameplay, story and voice acting – the game doesn’t hold back its storytelling once. Not only does the bundle include the long and classic base games of Baldur’s Gate 1 & 2, but also the expansions Siege of Dragonspear, The Black Pits, Throne of Bhaal and The Black Pits 2: Gladiators of Thay. Each expansion offers a new story with new villains and a brand new location to explore. My favorite was the Black Pit, which takes you through the perilous Underdark, a deep underground prison controlled by some of the most evil creatures in the series.

The port of BG1&2 features many bug fixes, optimization fixes and control improvements over the original ports on PC. The original mouse and keyboard menus have been aptly changed and are instead replaced with radial menus which cater to the analog sticks a lot better. Hotkeys mapped to the bumpers allow you to manage your team and quests quickly and instead of the old point-and-click control scheme, everything is controlled via one analog stick with the camera controlled with the other – which is a widely improved movement scheme over pointing with an analog mouse.

During combat, it’s probably still best to click with the pointer to utilize the much finer precision such as casting spells or attacking specific creatures. The one downside with these control schemes is the sheer lack of touchscreen compatibility, whilst the analog controls really are a blast and very smooth to play with, I found that using touchscreen might have been that one step to make the game as intuitive as possible.

In terms of audio, BG1&2 hits the nail on the head. From the atmospheric calming sounds that derive from walking through a forest to the upbeat and hopeful sounds of a tavern plagued with sailors and miners, the sound design and music add to the immersion indefinitely. The voice acting, though, is where this game really shines.

Almost every NPC has their own voice and personality, and the sheer amount of characters that stand out from one another is one of the ways that the game tries to grasp an emotional response from the player. I felt attached to my teammates, their dialogue during combat, the relationships I built with them wasn’t just through reading mountains of text, but also having full-fledged conversations with them.

For a game created for 1998 PC hardware, it’s no surprise that BG 1 & 2 would run spectacularly on the much more powerful Switch. There were very few performance issues during my playthrough of both games and their expansions. I encountered one or two minor bugs where quitting out and coming back into my save were necessary but nothing game-breaking. I heard that crashes were common for other people, but I had not encountered one during my long hours of playing.

Visually, the game is not great. Whilst the graphics can be seen subjectively, the main point is that the game just looks outdated. It feels old and gritty to look at, and whilst that fits the tone of the game, it sometimes breaks the immersion when you, your teammates, enemies or the environment looks like a 5-year-old’s Microsoft Paint drawing. The sprawling open-world feels caged in and broken up by the hardware limitations of 1998 and sometimes the game feels a lot like Link to the Past’s open world, not a D&D landscape.

The biggest observation I had whilst playing Baldur’s Gate 1 & 2 was its age. The game is an outstanding Dungeons & Dragons game, but for those people who are starting to get into the RPG recently, the fact that BG is built on Advanced Dungeons & Dragons’ rules – an outdated version of the game that often overcomplicates things that don’t need to be that way – it may be difficult for those really wanting to experience the story to actually get into the game, and that isn’t due to the combat difficulty, but rather the difficulty of getting your head around the games expansive mechanics.

Baldur’s Gate 1 & 2 Enhanced Edition takes the classic RPG formula that inspired the modern day deities and turns them into a game that shines its unique conventions in many areas. It’s undeniable that the game constantly feels like a battle to play, and due to that, it definitely shows its age in a negative way.