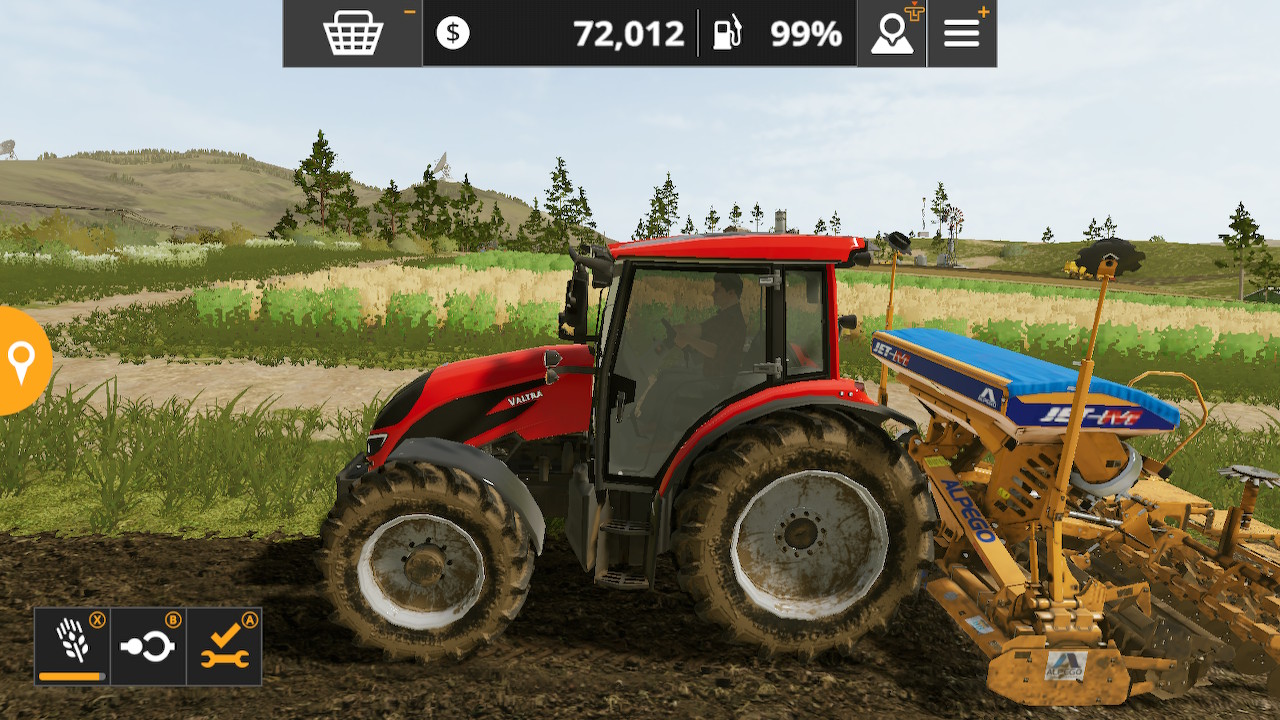 Focus Home Interactive has put out quite a few simulation style games over the years, turning everyday jobs into video games. Recently, their simulation titles have been making their way to the Nintendo Switch in the form of Mudrunners American Wilds and now Farming Simulator 20. FHI has released other ports on the Switch as well and has been making a name for themselves as a front runner for Switch publishing in 2019.

There’s not really a story in Farming Simulator. The game starts you off with a bit of money and a few plots of lands that you own. From there, the story and way you unlock the rest of the fields is really up to you. The game itself is a slow burn and not something you can just buzz through. Early on in the game you will find that money is tight and you just make do with the few tractors, cultivators, and seeders you have harvesting and unloading your crops where you’ll gain the most money.

In Farming Simulator 20 for Switch, you can drive tractors, harvesters, mowers, and more by using the R trigger for gas and L trigger to slow down, stop or reverse your vehicle. You can cycle through your fleet of vehicles by hitting the shoulder buttons. Reversing or driving forward into a piece of equipment will auto attach it if your vehicle is compatible with that type of equipment. Once you have lined up your harvester, seeder, or cultivator, you can then drive over your field and work through your task at hand.

You can change your seeding type by hitting X and cycling through the type of seed you can plant. Planting various seed types is a mini-game of sorts since the prices in the marketplace fluctuate. Keeping an eye on the prices and knowing when to sell because of demand and high prices is highly advised. Waiting to sell when prices are high can sometimes reward you with thousands of dollars,  overselling in the market when prices are lower.

As you gain money you can buy bigger and better equipment that usually helps aid you in getting your job of plowing and growing crops done faster. You can also hire workers, though you do need to pay them, to run farming equipment and work in your fields. As you gain more and more capital, you can purchase animals like pigs, sheep, cows, and horses. Having animals means needing to keep them fed and watered, as well as giving them a bed of straw to sleep on. Once you have animals, you can sell them, their wool, milk, etc. for a profit.

There are over 100 vehicles and tools that you will use throughout your time with Farming Simulator 20 if you choose to stick with the game and put in the time. Each and every vehicle you purchase looks like its real-world counterpart. Some of the vehicles have parts that move as you engage in cultivating, seeding and harvesting the fields.

The world has a dozen fields you can purchase and add to your overall land ownership. They vary in price and size and it will take you a long time to manage purchasing them all. I am already thirty hours in and only have had enough money to purchase the first four plots of land. With a variety of tools and animals to use and raise in the game your time investment into growing your farming empire is yours to build in whatever order you see fit.

Farming Simulator 20 has minimal audio throughout the game. There are ambient world sounds, but those are low key and do not stand out or distract from the overall gameplay. Each vehicle has a unique start-up sound as you drive and back up. The overall quality of the audio is mediocre, though Farming Simulator games have never been astounding in that sound department.

The visual fidelity and quality of each of the vehicles are impressive in how close they resemble their real-world counterparts. I am also impressed with the detail of the pieces that move as you engage your plower, seeder, and harvesters. The rest of the world, however, is a bit of a hit or miss with how it looks on the Switch. There is noticeable pop-in, sometimes making it hard to distinguish which fields are done and which are ready for harvesting.

While the crops in your field show various stages of growth, discerning which stage they are at or even what type of crop is growing can be hard to see. I have played Farming Simulator 19 on the Xbox and the low draw distance of the Switch version is one of my biggest complaints with the game. Farming Simulator 20 for the Switch also lacks any traffic on the streets in the world. This makes the game feel lonely and the world less realistic.

I have played over 150 hours in Farming Simulator 19 for the Xbox. The night and day comparisons of the Switch port makes it hard for me to recommend even to the hardiest of Farming sim fans. The game feels harder to progress in, especially in the early hours where growing and selling crops nets you only a few thousand dollars and waiting for the next harvest can seem to take forever. Once the game gets going however and you have a hefty sum of money and enough farms to sustain long term growth, the machine of farming and raising animals can be fun.

Farming Simulation games operate in a very small niche community of gamers. I love simulation games, which you can tell from my last several reviews. Farming Simulator 20 though does less to make me feel like a real farmer and more often feels like a chore.