[Review] Cadence of Hyrule: Crypt of the NecroDancer featuring The Legend of Zelda (Nintendo Switch) 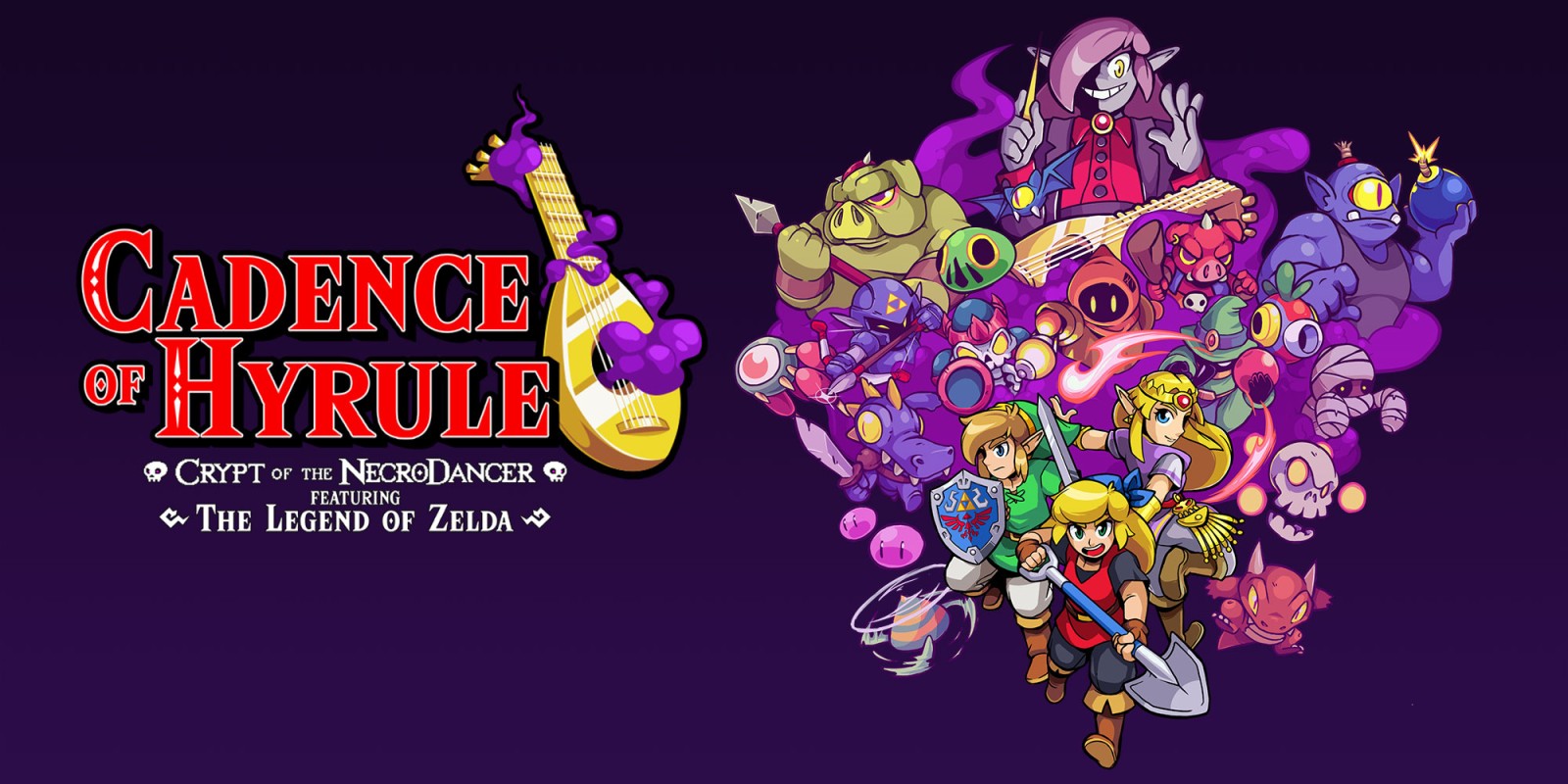 Like with anything, when it comes to video games, all bets are off. Somethings are expected, few things are guaranteed and surprises are aplenty, but Cadence of Hyrule (full name being Cadence of Hyrule: Crypt of the NecroDancer featuring The Legend of Zelda,) has to be the biggest surprise of them all.

Revealed as part of a Nindies Showcase that took place on March 20, 2019, Cadence of Hyrule looked like another Crypt of the NecroDancer game, but then came the Zelda soundtrack and mouths dropped immediately.

While gamers have seen the likes of Capcom, Tantalus and Grezzo work on Zelda game over the years, we have never previously seen a Zelda game be handled by a small independent team of developers and in the early days, it was never even meant to be a full game.

Originally Crypt of the Necrodancer director Ryan Clark approached Nintendo to get permission to use Zelda themed content as DLC for the Switch port of the game and joint interest from Nintendo and developer Brace Yourself Games, went on to evolve into the full on crossover game we have now and what a game it is!

Cadence of Hyrule might not be a canon Zelda game, but as a spin-off Zelda game, it is pretty sweet and it is a fantastic follow-up piece to the Crypt of the NecroDancer series.

Although it’s a crossover title, the entirety of Cadence of Hyrule takes place in Hyrule and features an opening cutscene that shows a character named Octavo, who puts Zelda’s father into a deep sleep and has Cadence, the female protagonist from Crypt of the NecroDancer, being transported in Hyrule.

Fortunately for Cadence, and the players, her quest won’t be a lonely one as Link and Zelda are on hand to aid her in the quest to locate four musical instruments, traverse dungeons and right the havoc caused by Octavo.

Missing the beat skips your action but the enemies will keep moving, potentially closing in on your position. Unlike in Crypt Of The NecroDancer however, you don’t lose health if you fail to keep up with the beat. This allows a lot more room for error and improvement without being penalised for not keeping pace.

The map is randomly generated for each playthrough so that no two playthroughs are the same. Even dungeons can change every time you die and come back. There are puzzles to solve in order to progress through some sections that can sometimes require the use of special items like the iron boots or hookshot.

You will begin the game with the basic of items and weapons but you can find stronger weapons or upgrade the ones you have to make them stronger. If playing as Link, you can use a sword among other weapons to attack and a shield to defend yourself. As Zelda, you can use Din’s fire to attack enemies and Nauru’s Love to defend yourself. Cadence plays similarly to Link and can use most items.

Along your travels, you can find weapons that attack differently from one another. The short sword attacks on space in front of you, a broadsword can attack three spaces across the direction you are facing and is useful for hitting enemies around corners.

The spear can do damage to enemies two squares away from you and is handy for keeping your distance from incoming attackers. The flail attacks in an L-shape which is ideal if you find yourself surrounded as it can hit multiple enemies at once.

As regards to items and sub-weapons, there are 24 you can use manually and 8 that work automatically. These sub-weapons and items include Bow, Bombs, Hookshot, Boomerang and bottles. These can be designated to any of the A, B, X, Y buttons. The L button will perform a special attack once learned, at the cost of stamina. The R button will activate the shield or Nayru’s Love.

In terms of what Cadence of Hyrule has to offer, the short answer is a lot. While the game can easily be beaten within four and six hours, there can be no denying just how much Zelda content the game has. Cadence of Hyrule is not another Crypt of the NecroDancer game with a Zelda skin, but a full on crossover game that really did its homework on all things Zelda.

From collectable heart pieces to various iconic weapons and items and even Tingle, Cadence of Hyrule leaves no stone unturned and even has a small recreation of the Windmill Song of Storms scene from The Legend of Zelda: Ocarina of Time. Heck, it even features two minigames straight from Ocarina of Time and playing them is vital, if you wish to earn a heart piece for each one.

In terms of main campaign content however, Cadence of Hyrule offers what The Legend of Zelda: Breath of the Wild doesn’t, dungeons. The only downside to the dungeons however, is that they are relatively short and provided you’re not encountering issues beating them, you should be able to breeze through the first four with relative ease and have their associated boss defeated within thirty minutes.

Speaking of bosses, each one is a straight up Zelda foe that has been reimagined in some way, so as to tie into the music side of the game, such as a Gohma wielding maracas. As for the lesser enemies, such as Deku Scrubs and more, they’re still very much the traditional Zelda enemies we know and love, except now they like to groove when they move.

Particular features that should intrigue potential gamers, is the fact that in addition to being able to play the game without having to keep to the beat, thus allowing Cadence of Hyrule to feel even more like a true 2D Zelda game. You can also tailor make your playthrough by enabling and disabling a variety of features such as the game over shop, context sensitive hints and enemy hearts.

You can even do away with the tutorial, check out the speedrun, step-count and daily challenge leaderboards, or just settle for altering graphic settings that can cause the screen to shake, remove the beat bar and have a checkerboard floor grid appear when enemies are close.

My favourite feature of them all however, has to be the fact that local multiplayer is an option and while you can start a new playthrough with a friend, you can also head to a Sheikah Stone on your single player save file, and enable co-op if you have someone to play with you. Both players will each have their own set of hearts and upon dying, heading to a Sheikah Stone will bring them back to the fold.

As for my second favourite feature, just in case Cadence, Link and Zelda are not enough characters to play as, there is a fourth unlockable character just waiting to be obtained, but you will need to get 20 Deku Seeds for that particular privilege. (Don’t worry, 8 can be obtained from a single cave in the Lost Woods.)

As a rhythm game, music is the most important thing as far as Cadence of Hyrule is concerned, composer Danny Baranowsky has done a bang up job of remixing the game’s soundtrack, which is comprised of various Zelda classics.

Not everyone’s favourite tunes made it in, but without spoiling the full list of what did make it in, let’s just say you won’t be disappointed. Oh, and let’s give Elspeth Eastman some praise as she is the voice actress responsible for Cadence’s line. As for the voice actress behind Link that would be Caitlyn Bairstow.

Being based on The Legend of Zelda: A Link to the Past, it’s understandable that Cadence of Hyrule looks like a somewhat modern interpretation of the Zelda classic, but did you know this 2D delight is pixel work is the creation of those who had the privilege to act as part of the art team behind Sonic Mania?

Not the whole team, obviously, but the sprite work is da bomb and the cutscene designs of Link, Zelda and Cadence, is something I can really get behind. They look great, they look natural and if I wasn’t immediately sold on Cadence of Hyrule, the game’s art direction is something that would have got me on board with no delay.

As far as Cadence of Hyrule is concerned, it is a bug free game that I have nothing but a lot of respect and admiration for. It might be indie on the surface, but make no mistake, it is this 2019’s answer to Mario+Rabbids Kingdom Battle. It is a game that does right by both franchises and it reeks of The Legend of Zelda: Breath of the Wild vibes as well.

Remember when you started playing the hit Zelda game? How easy it was to mess up and get your butt handled to you? It was crucial to experiment with weapons and to strategise, not to mention whilst collecting everything you possibly can, just to stand a chance.

There is a bit of a learning curve to Cadence of Hyrule, especially when playing to the rhythm, but once you get the hang of it, or at least get a couple more hearts, everything becomes so much easier and you’re slaying everything and everyone in no time.

Still, the multiplayer function is great and does not feel out of place whatsoever. Like everything else in the game, it all just works and the devs really went out of their way to cater to everyone’s wants and needs and not just their own. Cadence of Hyrule is blessing from Hylia herself and the true sin would be not to play it in the first place.