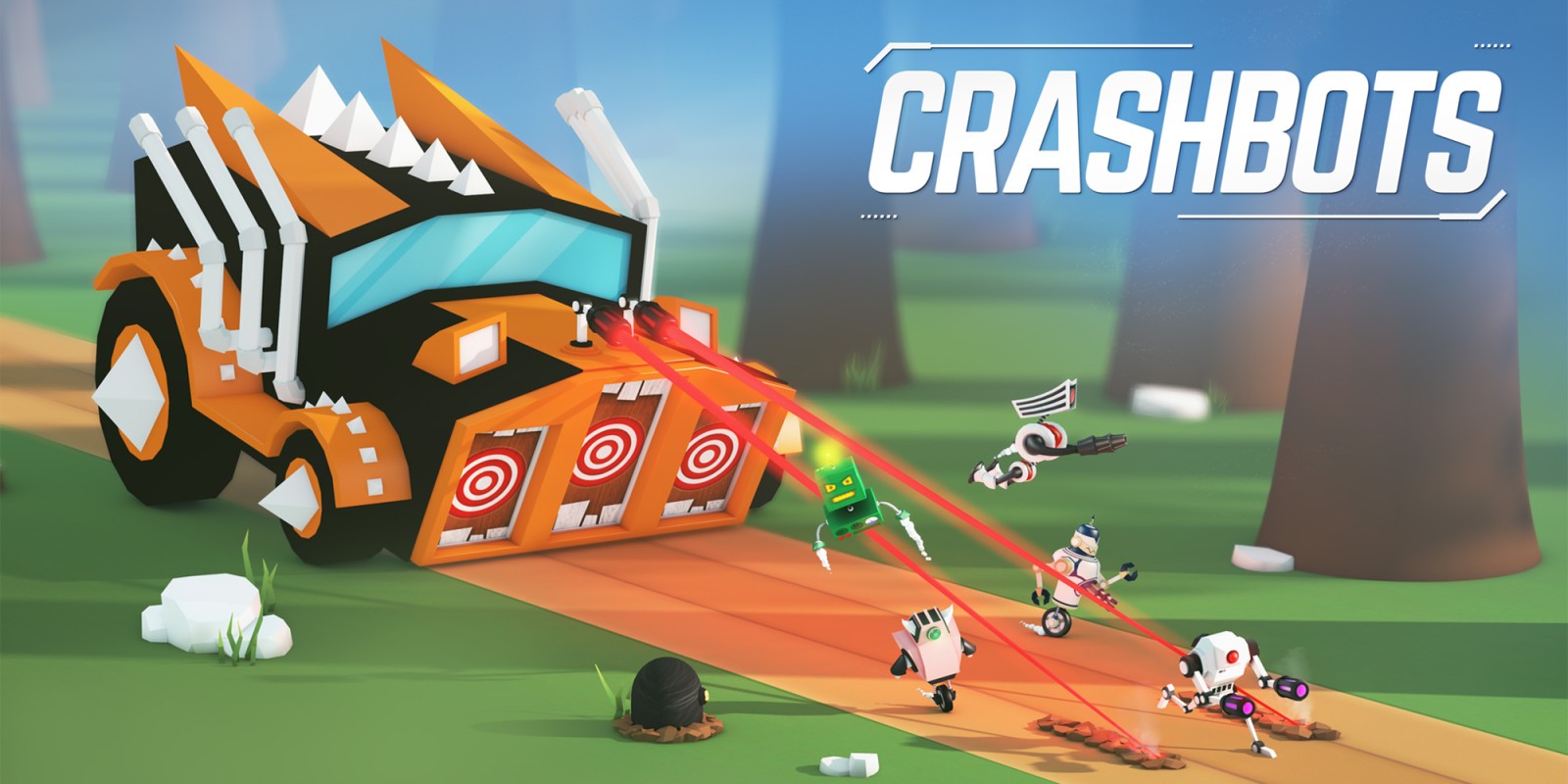 Ever since Canabalt released in 2009, the runner genre has become ubiquitous in gaming. It seems like everywhere you look, a developer is throwing their hat into the ring, whether it be an endless runner or a level based take. Crashbots is the latter, and it actually does some interesting things to set itself apart from the pack.

Rather than being a simple run and jump game, you play as a robot that can shoot, hover with a jetpack, and more. With so many actions available to you in a genre usually known for its simplicity, Crashbots runs the risk of being too complicated for its own good, but as it turns out… it is!

Crashbots is an epic apologue full of romance, revenge, and redemptio- actually, scrap that, the game has no real discernible story beyond the rudimentary scenario that can be gleaned from the gameplay. You’re just a robot who has to run to the end of various context-free levels. Truly a riveting tale worthy of its own paragraph!

The goal of Crashbots is to have your little robot reach the end of each stage while collecting three stars and completing three optional goals. Getting enough stars will let you unlock more worlds, while completing the bonus goals will earn you extra coins to spend on upgrading your bot.

The only problem is that doing all three of these things in a single run is nearly impossible due to how punishing the gameplay is. Not since Bloodborne has a game so brutally crushed my spirit within the first several minutes of booting it up. Where do I begin?

Crashbots commits what is perhaps the greatest possible sin for a runner: it has no flow. Flow is kind of a hard thing to explain, but you know it when you feel it. When I think of my favorite games, I can picture the way they flow perfectly in my mind.

The sensation of leaping and rolling through just the right route in Sonic the Hedgehog, the satisfaction of finding that perfect racing line in Ridge Racer Type 4, the snappy feel of zipping around corners while blowing enemies away in Perfect Dark. Crashbots lacks any of that. Instead, you constantly smack into obstacles, miss crucial items, and run out of energy.

Yes, your robot runs on energy, which drains by doing literally anything. Moving, sliding, dashing, shooting, and jumping all take energy, and if you run out, you’re dead on the spot. You can replenish it by collecting items along the level, but it’s just plain annoying to have to constantly worry about resource management on top of all the other nonsense the game throws at you.

There are a huge host of obstacles in your way, and their insanely annoying movement patterns will kill you time and time again. It feels like nothing in this game is running on the same cycle. Spikes are popping up, saws are moving back and forth, hammers are swinging, and there’s no sensible rhythm to the chaos.

Another issue is the way your robot moves. Despite each level very clearly having three distinct lanes to run between, your character doesn’t snap between lanes. This totally free movement combined with the isometric angle makes dodging obstacles and collecting items a real pain. It’s not like you can stop to get your bearings either, as your character automatically runs forwards in typical runner fashion.

Each level feels like you have a choice of either constantly taking damage until you die or ignoring key items and objectives just to get to the end of the level without tearing your hair out. I especially like when I get hit by a hazard, fly backwards as a result, and proceed to get immediately killed by the hazard I was thrown into. And that’s not even the worst of it!

The game is littered with crates that contain items, but not the kind you spin to open like in Crash Bandicoot. You have to shoot these bad boys to break them. When you shoot a crate, it creates a huge distracting visual effect that totally obscures what’s in them for a few brief seconds – and since you can’t stop moving forward, that’s just long enough for you to blindly stumble into the smoke hoping that whatever the box contained isn’t about to screw you over.

You could get a star or a battery to replenish your energy… or you could walk onto a spike that drains your energy, a skull panel that does the same, or a pause button that totally halts your movement and throws you off what little groove you had. There is literally no way to see what is in these boxes before you step on them unless you shoot them from far away – too bad they’re usually positioned behind spikes that block your shots!

Even worse are the stars on the track that are locked behind a glass case with three boxes in front of them. Two of the boxes contain a skull panel, but one has a flashing button that opens the case. The idea is to shoot all the boxes to reveal the panels, then step on the one that has the flashing button, but in practice I almost always step onto a skull panel because I can’t see what I’m doing, forcing me to restart the level to get that star.

Are we having fun yet? Simply getting through a level utterly drains my desire to continue playing, let alone actually going for the stars and optional goals at the same time (and by the way, you don’t get that coin reward for doing the side goals unless you get the stars too. Complete the goals but miss the stars, and you’re out of luck.)

Should you for some reason have read what I just wrote and thought “gee, this sounds like fun!”, then you’re in luck.

Not counting the brief tutorial area, there are 5 worlds with 25 levels each, an Endless Mode that challenges you to get as far as you can without running out of energy, a Robot Workshop where you can unlock new bots and spend coins found throughout the levels to upgrade their attributes like damage and energy usage, and Missions that let you earn coins to purchase said upgrades. If only any of it was worth engaging with!

As Crashbots’ repetitive techno beats drill their way into your brain in a desperate attempt to become your next earworm, only to be deflected by the sheer power of their mediocrity, you will have but one solitary thought: “wow, this is a really boring soundtrack.” It’s the kind of music where I had to go back and check if it even had any when writing this review because it was that unmemorable.

Despite being painful to play and listen to, Crashbots is actually not that bad to look at. The game has a very clean art style reminiscent of a high quality mobile game. The robot designs are a little generic, but you’ll mostly be looking at the environments, which are low-poly but work well with the game’s simple, colorful aesthetic. Suffice to say, the graphics are the high point of the game.

I struggled to get past even the first world of this game for review, so I can’t imagine why anyone who isn’t contractually obligated to do so would want to. If you’re the type of masochist gamer who seeks – nay, demands a stiff challenge, then maybe you’ll find something to enjoy here.

You’re welcome to come back to this review and laugh at me like I’m that guy who couldn’t get past the tutorial stage in Cuphead. For everyone else, there are countless Switch runners to play that are far more enjoyable experiences than this one, such as Kid Tripp and Runner3.

With infuriating gameplay that will short your circuits and music so mediocre you’d be hard pressed to retrieve it from your memory banks, this bot crashes alright – it crashes and burns.