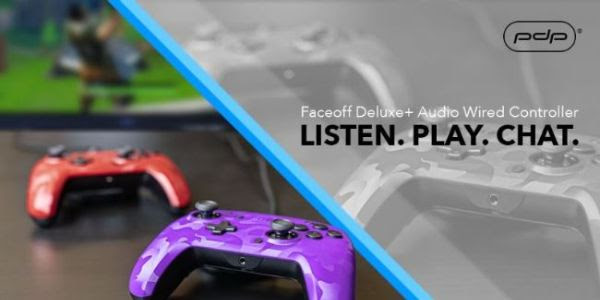 PDP have announced that their newest range of PDP wired Nintendo Switch Pro controllers are available to pre-order. The new PDP Faceoff Deluxe+ Audio Wired Controller come with an 3.5mm audio Jack for game audio as well as integrated in-game chat. This will allow gamers to chat with their friends online whilst playing games that support the feature on Nintendo Switch.

The controller will set you back $29.99 and is available in an assortment of colours like black, red, purple and blue camo. The faceplates are interchangeable and can be swapped with previously released faceplates. This includes the Super Mario, Zelda, Yoshi and Luigi faceplates on the previous PDP Faceoff controllers. There are also designated buttons to adjust audio and an extra two programmable buttons as well.

For more information, you can check out the official press release below.

May 20, 2019 – PDP has kicked off pre-orders for the first Nintendo Switch controller with an audio jack for game audio and integrated in-game chat, the Faceoff Deluxe+ Audio Wired Controller. The built-in 3.5mm audio jack on this new controller features support for audio on every title plus integrated in-game chat for those that offer it, like Fortnite*. The Faceoff Deluxe+ Audio Wired Controller will be available in Black Camo, Blue Camo, Purple Camo and Red Camo for MSRP $24.99, and starting today gamers can reserve this controller on pdp.com and Amazon.

The Faceoff Deluxe+ Audio Wired Controller is officially licensed by Nintendo® and features support for integrated in-game chat, premium game audio through a 3.5mm audio jack, patented on-board audio controls that let you adjust the audio on the fly right from your controller, plus two additional programmable buttons – making it the best Nintendo Switch controller for serious gamer 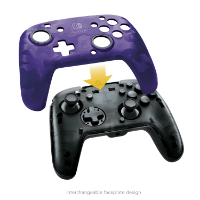 The new Deluxe+ Audio Wired Controller also allows you to swap out and snap in different faceplates with a unique interchangeable design! You can take your favorite faceplates from the existing line of Faceoff Controllers from PDP and use it on this new version – whether it be MarioTM, LuigiTM, YoshiTM, Super Star Mario, Super Mushroom, The Legend of ZeldaTM: Breath of the Wild, or Black and Blue Camo faceplates.

PDP will also be launching new Faceoff Mod Kits that will include individual faceplates featuring iconic artwork from some of your favorite games – coming soon on pdp.com, and sold separately. Customize the new Faceoff Deluxe+ Audio Wired Controller with the look you want!